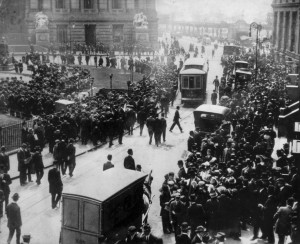 The Waiting Game: Down at the White Star Line’s Broadway offices near Bowling Green, anxious New Yorkers line the streets waiting for news about the sunken vessel. 1912

Over fifteen hundred people died the night the Titanic sank, April 14-15, 1912. The early reports from the New York newspapers, of course, spent their time mourning the city’s most connected figures to society. Even from some of the most obsessive sources on the Titanic, the details on the lives of dozens of men and women who died below deck are sometimes hard to locate.

There’s always been something slightly unsettling to me about using primary news sources for Titanic research. The weight of wealthy lives over poor ones — of women over men, and of American and British lives to all others — can be a little unsettling. For instance, an anecdote from an April 20, 1912, article in the New York Times: “…[I]t became known among those saved from the Titanic were six or eight Chinamen who were among the steerage passengers on the big liner. It seems that they climbed aboard one of the lifeboats without anybody making objection, despite the fact that many of the women in the steerage of the Titanic went down with the ship.”

Steep yourself in the gravity of this weekend’s many centenary Titanic remembrances fully knowing they sometimes embody a Gilded Age slant towards the great loss to New York high society. But this was indeed a tragedy that shook most of the entire world to its core and, in particular, changed the lives of many Americans, from tenements to townhouses.

The old-family names and the wizards of business (Astor, Straus, Guggenheim) have been well documented. But here I present the fates of five well-off but perhaps lesser-known New York women who survived the sinking of the Titanic with intriguing stories of their own to tell:


Dr. Alice Farnham Leader
Born in New York, May 10, 1862
Alice would have been among the second generation of women trained in medicine, and a career in pediatrics was one of the few that a women of her day could ably progress towards. As late as 1907 she was employed at Bellevue Hospital as ‘a social service nurse‘.  However she wasn’t a practicing doctor by the time she boarded the Titanic; the 49 year old had retired when her husband died in 1908.

She was rescued by lifeboat no. 8, commanded by one of the Titanic’s most famous names: NoÃ«lle Rothes, the Countess of Rothes. “The countess is an expert oarswoman and thoroughly at home in the water,” Alice told the press, who sadly seemed more interested in the fate of the the titled gentry than of this mysterious doctor who appears to have avoided the spotlight for the remainder of her life.

Afterwards: Dr. Leader is mentioned in a Utah newspaper in 1916, discussing the crisis of graying hair.  Her solution: “A head exercise for circulation is to lie on the couch with the head projecting beyond the couch. Bend the head forward, backward, to each side, to each side, then rotate.”
Died: April 20, 1944

Irene (Rene) Harris
Born: June 15, 1876
A New York stage actress with some considerable credits to her name, Harris boarded the Titanic with her husband Henry Birkhardt Harris, the theater impresario and partner (with Jesse Lasky) in the Folies Bergere, which has just opened in midtown the year before.

Irene made it to a lifeboat but her beloved husband perished on the Titanic. The Times recounts her cable to the Hudson Theater: “Praying that Harry has been picked up by another steamer.”

Afterwards: Returning to the New York theater in grief, she sued the White Star Line for a large petition of damages, and perhaps with good reason; she discovered when she got home that her husband was nearly bankrupt from the Folies Bergere venture and other flops. So she decided to make her own money, soon becoming one of Broadway’s first female producers with such shows as ‘Lights Out’ and ‘The Noose’ and buying a Park Avenue apartment.

But her wealth didn’t make it out of the Great Depression, and she spent her last days living in Manhattan hotels.  In 1958, she was subjected to a screening of the Hollywood film ‘A Night To Remember‘. “I think your film title is a mistake,” she said. “It was a night to forget.”
Died: September 2, 1969

Margaret Hays
Born: December 6, 1887
If not for the tragic sinking of the Titanic, Margaret Hays’ fate might have made a charming family comedy. The young woman lived at 304 West 83rd Street and had gone to Europe with two school friends Olive and Lily. And there was another lady, or rather, Lady, Margaret’s Pomeranian dog.

All three friends and her little dog too made it to a lifeboat, but Margaret’s story was just beginning. Onboard the rescue ship Carpathia were two small frightened French boys. They had been separated from their father Michel who was never found. Hays, who spoke French, took the boys into her care during the somber voyage and well after they arrived in New York. They stayed at her home on West 83rd — she distracted the distraught boys with carriage rides up Riverside Drive — until their mother arrived from France.

On her arrival, it was revealed that their father had taken the two boys against their mother’s will during a bitter divorce battle.

Afterwards: Hays married a Rhode Island doctor and lived in relative comfort, dying during a vacation in Argentina.
Died: August 21, 1956

Below: The ‘Titanic orphans’, named Michel and Edmond (not Louis & Lola!), below with their mother at Hays’ West 83rd Street townhouse. 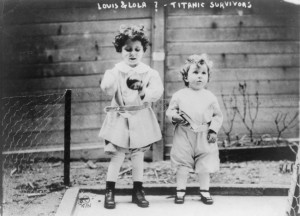 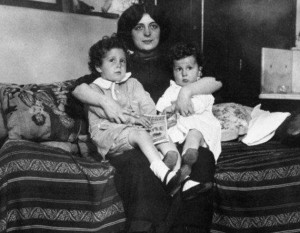 Leila Meyer
Born in New York, September 28, 1886
The young socialite and daughter of Andrew Saks (founder of Saks Fifth Avenue) met aspiring Wall Street broker Eugene Meyer and married him in 1909. While traveling, Leila was wired the tragic news that her father had died. (Later, she discovered that a sizable part of their fortune had been willed to her.) Leila and her husband boarded the Titanic to return home. She made it to a lifeboat; her husband died aboard the ship.

Afterwards: She later remarried and lived the remainder of her life at 970 Park Avenue, rarely speaking to the press about her tragedy, although her spectacular jewelry collection was frequently remarked upon in women’s magazines.
Died: November, 27, 1957 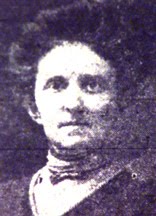 Charlotte was well versed in the thrill of ocean travel. Her father, once a well-known dry goods importer, worked for the firm which operated the Black Ball Line, one of the oldest shipping companies in New York and no stranger to a few shipwrecks of its own. She married into the prestigious Appleton   publishing family and was on the Titanic with two sisters, returning from a funeral in England.

Afterwards: Mrs. Appleton’s name is familiar with Titanic buffs as she was an acquaintance of Col. Archibald Gracie IV, the great-grandson of the man who built Gracie Mansion and one of the more notable bold-faced names on the Titanic. Mrs. Appleton lived the remainder of her life at 214-33 33rd Road, the oldest house in Bayside, Queens.
Died: June 25th, 1924

Some pictures and many of the birth/death dates above are courtesy Encyclopedia Titanica. Top picture courtesy the Library of Congress.

CORRECTION: An earlier version of this post accidentally killed off Archibald Gracie IV on the Titanic! The gentleman survived. In fact, his survival memoir became one of the core sources for early Titanic historians. More about that in our podcast on his ancestor, the first Archibald Gracie and Gracie Mansion.

4 replies on “Doctor Alice, the Saks heiress, and the accidental nanny: Fascinating New York women who survived the TItanic”

I wonder if Dr. Leader might be the namesake of Leader House, the former Mitchell-Lama apartment building on the Upper West Side.

another award-winning, interesting post by the BB! RIP the souls of the damned, unlucky Titanic.

http://www.shorpy.com/Titanic_survivors_1912?size=_original
A great photo of the Titanic orphans