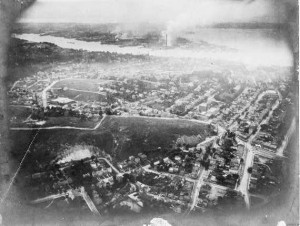 The sky’s the limit: Staten Island from the vantage of a hot air balloon, August 1906. (Courtesy LOC)


“God might have made a more beautiful place than Staten Island, but He never did.” — George William Curtis

If you’ve ever been slightly bemused by the newspaper profiles of trendy neighborhoods, presented as though the reporters were urban archaeologists ‘discovering’ heretofore hidden pockets of the city, then you’ll find amusement in this New York Tribune article from July 1912.

Hopefully to snag the attentions of Manhattan businessmen, the Tribune staff devoted an entire section in their Sunday section to extolling the many virtues of one of its more foreign corners — Staten Island.

The other island borough may have indeed been a mystery to many Tribune readers; the city had taken over ferry service just a few years previous, and there were no bridges yet linking Staten Island to Brooklyn. Many Manhattanites in 1912 harbored the impression that Staten Island, once known as a rural recreational getaway,  was now a dull and uncivilized farmland with a few scattered industries.

But this Tribune article was inspired by a promise that would finally draw Staten Island into the fold — the subway.


Below: A real estate map of Staten Island from the 1912 article. The dotted lines at the bottom denote where the proposed subway line would have been. 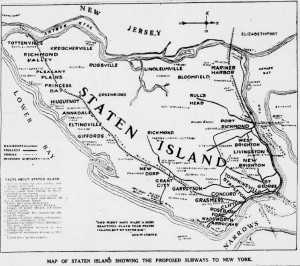 Manhattan’s Interborough Rapid Transit Company (IRT) and the Brooklyn Rapid Transit Company (BRT) were nearing an agreement with the city to expand the present subway system and create new lines throughout the city. This plan, called the Dual Contracts, helped lay out most of the current New York subway routes today. However there were many potential lines that were never built (despite the efforts of a few future mayors). Among the most ambitious was a subway link to Staten Island.

It was with the anticipation of this underwater track (linking Stapleton to Bensonhurst, see map abovve) that the Tribune hoped to regale readers with the unspoiled wonders of New York City’s least populated borough.

Forget the fact that Staten Island already had an intimate, but thriving old-money scene, the vestiges of a genteel society formed among the mansions of tycoons along the north shore. Fast-paced urbanites would have considered them stubbornly charming but boorish. Society and recreation were not the appeal.

Below: New Brighton, at Central Avenue and Fort Hill, 1905 (LOC)

The Tribune focuses on Staten Island’s destiny as ‘one of the greatest shipping and manufacturing centres of the world’ and wonders deliriously at the delights of that great, underused waterfront. Some highlights from the article (which you may read in full here):

1) Staten Island’s terrific gas supply, the borough’s oldest public service supply, lives up to its motto to ‘Make Gas Service Good Service And Then Some’. Its most recent successes include a yard dyeing manufacturer, the gas engines of the Swift Beef Company, and soldiering furnaces for the U.S. Department of Lighthouses. And the price of gas is going down!, claim management.

2) The Varnish Capital: One of Staten Island’s great success stories is its varnish industries, most notably Standard Varnish Works, which has miles of underground pipes that filter oil and turpentine from the docks to large storage tanks in the neighborhood of Elm Park. Sold around the globe, “the sun never sets on products manufactured by the Standard Varnish Works.”

3) ‘Country Life’, not ‘Lonely Life’: In New Dorp,  homes upon a ‘noble ranges of hills’ have access to a fine beach, according to the article. “The loneliness that so many people fear as the bane of country life has had in no chance to make itself felt in New Dorp.” A resident describes it as ‘earthly paradise’.

4) Building Innovation: One of Staten Island’s most successful builders is W. H. C. Russell, ‘the pioneer … of the famous asbestos ‘Century’ shingles’, used in the construction of public schools and government buildings.’

Below: The glory of varnish, Standard Varnish Works in Elm Park, that is. (NYPL) 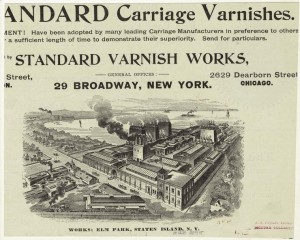 5) Hot Development Opportunities (But Not Too Hot): A St. George realtor admits, “Do not think for a moment that I have been tearing up the earth or anything of that sort, but … I have been doing very satisfactory business.”

6) Great Subway Expectations: The report speculates that the new subway link will get commuters from Stapleton to lower Manhattan in about thirty minutes, bringing the borough’s ‘most entrancing’ residential areas into the subway’s five-cent-fare zone.

7) Don’t Let The Factories Bother You! ‘The man who prefers to live in a place with superb country features, where are green fields, towering shade trees, winding roadways inviting to autoists and owners of harness horses … should not turn his step away from Staten Island because bigger factory zones are going to be built there soon.’

9) ‘The Garden Spot of Greater City Of New York‘: ‘Verily, extremes meet here. Already quaint and prosperous little villages have begun to take on new life and expand ……. [E]very day adds to the list of those who through out-of-door life and sunshine are ‘finding themselves’ and adding measurably to the pleasures as well as to the number of their days.’

10) ‘Spotless Town‘: But if you need to be around wealth, the old Vanderbilt estate is being chopped up into ‘high class lots’, near the Fox Hills Golf Course, ‘the finest course in America’!