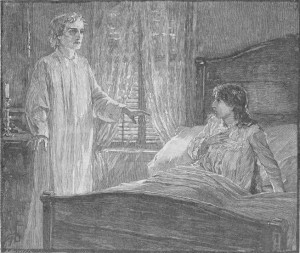 Catch up on the tradition by listening in to our last five ghost story shows. You can listen at the links below, download them from iTunes or find them anywhere you listen to podcasts:

Spooky Stories of New York (2008)Â [download] [iTunes]
The drunken spirits of the Algonquin, the mysteries of a hidden well in SoHo, the fires of the Witch of Staten Island, and ‘the most haunted brownstone in New York’. [original blog post]

Haunted Tales of New York (2009)Â [download] [iTunes]
The secrets of the restless spinster of the Merchants House, the jovial fright of the Gay Street Phantom, the legend of the devil at Spuyten Duyvil Creek, and the spirit of a dead folk singer. [original blog post]

Haunted Histories of New York (2011)Â [download] [iTunes]
What’s horrors are buried at the foot of the Statue of Liberty? What’s below a Brooklyn Catholic church that makes it so dreadfully haunted? What ghost performs above the heads of theatergoers at The Palace? And what is it about the Kreischer Mansion that makes it Staten Island’s most haunted home? [original blog post]

Above: From the Harpers Weekly illustration ‘The Apparition’, courtesy New York Public Library

one of the favorite parts of my week is cooking a nice dinner, and listening to your podcasts or catching up on your posts while i eat. Its therapeutic. Thanks for all the wonderful information on NY. I usually read one of your posts and then spend an hour or so looking for any additional information out there on the topic. NY is fascinating. Hopefully I will be able to visit some day.
– A fan in TX.

I grew up on 21st Street between 7th and 8th, almost 50 years ago. My mother and uncle both died in the apartment. I was told an old man had died there before they did. The fireplace always scared me. The rent was $76 per month, then. My mother had a lease that was for 99 years. Mr. Bloutstein was the landlord. The supers name was Amos. He would knock on your door at 7 to get the trash and put it in the dumbwaiter. I remember when the minstrel would come down the street, with a monkey. People threw money out the window. In the summer Mr. Softy Ice Creams truck would show up around 4. No one had air conditioning. On the weekends someone would open the fire hydrant. Kids would look for cans to scrape the bottoms off on the side walk to make tunnel to shoot the water at people. I remember stick ball, stup ball, hockey in the street amd roller skates with keys. It was different then.