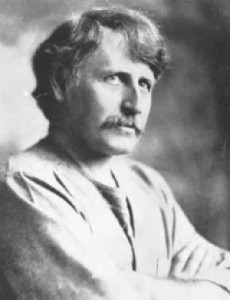 New York has seen its share of bizarre entertainments, especially back in the days of vaudeville, when people would pay for almost anything that amused or titillated.  A few months ago, I wrote about the novelty star Don the Talking Dog, who allegedly spoke a handful of English and German words.

But another vocally talented star was the hot vaudeville ticket one hundred years ago — Charles Kellogg, the man who could extinguish fire with his singing voice.

Kellogg was an early environmentalist and promoter of California’s redwood forests.  He billed him as ‘California’s Nature Singer,’ known for his sterling emulation of bird song,  recording his aviary music for Victor. “He was born with the throat of a bird,” said the New York Times.  Imagine cranking up this record on your Victrola, his ‘duet’ with Romanian soprano Alma Gluck:

Kellogg voice was allegedly superhuman.  It could not only emulate the sounds of nature, but it could protect nature from devastating flame.

He performed this particular trick in New York on November 11, 1913, at the brand-new Palace Theater (Broadway/47th Street), performing for an audience which included various New York fire chiefs, several scientists, and an auditorium full of curiosity seekers.  Also on hand: William Temple Hornaday of the Bronx Zoo, his reputation recently sullied over the whole Ota Benga scandal. 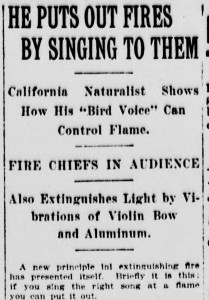 During the demonstration, Kellogg proved he could affect the flickering flame on the other side of the stage by first aiming his ‘bird song’ at it, then by drawing a bow across a sheet of metal.  “He stood fifty feet away from the flame and drawing the bow across the metal and singing his bird song the flame acted the same way, finally going out.”

Kellogg continued his display of natural gifts by demonstrating a divining rod for finding water, then by dropping to the floor and “demonstrated the Indian way of making fire by friction with two pieces of redwood.”

Captivating, I’m sure, but not enough to convince New York’s fire chiefs.  “It has not yet reached a point where Fire Commissioner Johnson will put male quartets in the fire house ready to dash to a fire and render a popular ballad.” [source]

Kellogg returned to New York in 1917 with another redwood-inspired creation — his ‘redwood motor home’, called the Travel Log (pictured below), which he and his wife took cross-country.  The idea of a ‘mobile home’ was a true novelty for the day.  Kellogg’s Travel Log was briefly displayed at a motor car salesroom on Broadway and 57th Street to the delight of auto enthusiasts. 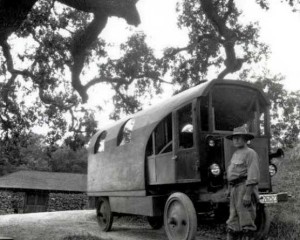 By the way, Mythbusters recently took up Kellogg’s challenge as to whether the human voice could put out a fire.  The verdict — yes, it can, but not at any decibel Kellogg could have possibly been singing in. More information here.