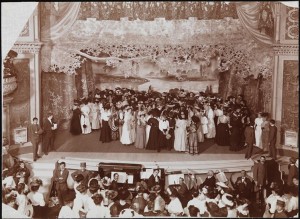 A ton of people on-stage at the Harlem Opera House in 1907. During this period, it was owned by vaudeville impresario Keith Proctor and called Proctor’s Harlem Opera House. Pictures courtesy the Museum of the City of New York

The Hotel Theresa, subject of this week’s podcast, had a rather unusual neighbor in its early years.

Harlem is known for a rich musical heritage in a variety of genres, but did you know it also had very old ties to world of opera, from as far back as the 19th century?

Oscar Hammerstein was a wealthy New York cigar maker who decided to dip his toe into real estate ventures, and in a most surprising neighborhood.  Thanks to the construction of the elevated railroads in the 1880s, the once-distant Harlem was now linked to the heart of the city, and thousands began moving there, particularly European Jewish immigrants. 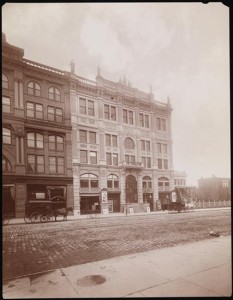 Hammerstein built dozens of rowhouses for prospective residents, but his real vision was the Harlem Opera House (at right), constructed in 1889 and located at 207 West 125th Street, on the other side of the street from the Hotel Winthrop (later the Hotel Theresa).

For a time, it really did just showcase operatic productions, of both the severe and light varieties.  According to author Jonathan Gill, “Hammerstein had a broad vision of what uptown theatergoers wanted, and he produced both popular and genteel drama and opera in English translation, an experiment that proved attractive to audiences who were willing to pay up to $2.50 a ticket.”

Famous stars were drawn here from the stages of Herald Square.  For instance, Edwin Booth performed Shakespeare here in 1889, a few years before his death.  Lillian Russell, a favorite of the New York press, performed the show ‘An American Beauty’ here in March 1897. 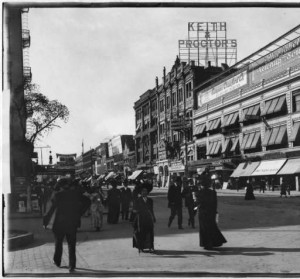 The Opera House was torn down in 1959.  Surprisingly, it appears there was the possibility of a new opera house in Harlem being built in the late 1960s, under the guidance of Gian Carlo Menotti, but that never panned out.  However, the operatic tradition lives on today with the Harlem Opera Theater, founded in 2001.

Below: You can still find the Harlem Opera House in Harlem — on the walls of the 125th subway station, in mosaic form! 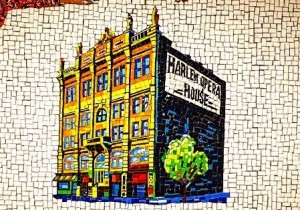 1 reply on “Harlem on a high note: The grand Harlem Opera House”

What a helpful posting this was! Thank you, Bowery Boys. Our Subway Art Tour Four [https://walkaboutny.com/the-tours/subway-art-tours/subway-art-tour-four/] includes the subway art at 125th St. & Lenox Ave. where the glass mosaic of the Harlem Opera House can be seen on the Downtown side. And you have used a photo of it.