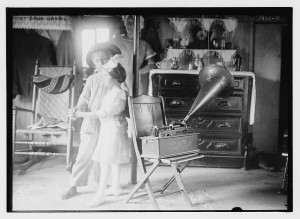 “Photograph shows a boy and a girl dancing while an Edison Home Phonograph plays in a house in Broad Channel, Queens, New York City.” — taken between 1910-1915

Here’s something many people thought they’d never see again in New York City — the opening of a new record store.  Rough Trade, known for their famous London record shop, will open an awesomely spacious new store in Williamsburg this week, with vinyl-record listening stations, a coffee shop, live performances and a heap of nostalgia on its shoulders.

Remember Tower Records on Broadway?  Virgin Records in Times Square?  The old subway Record Mart? The long-vanished Commodore Record Shop?  The past is littered with the ghosts of music stores long gone. 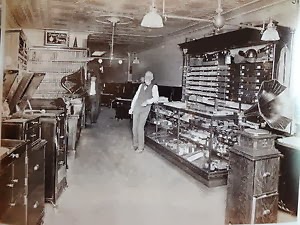 But where did people first buy recorded music in New York City?  The first recordings came on phonograph cylinders, long tubes with the grooves etched along the front, often made with wax.  Essentially, they looked like — and probably smelled like — big, decorative candles.

They were soon in competition with phonographs in a flat, wax disc form, the musical delivery device which eventually won out and became the standard for decades.

In the beginning, recorded music was played in exhibition halls, not available for home use.  By the 1890s, the first musical devices were available for purchase, and phonographs were sold in establishments that offered instruments, music boxes or early electronics — Broadway piano stores (like the one above, in 1910) or the places down on the soon-to-be-named Radio Row which offered New Yorkers the latest technology.

Naturally, the first records were made to play on Edison machines, pricey novelties in the late 1890s.  Here, in 1898, you could put a down-payment on the purchase of a phonograph machine and a bicycle — a real hipster double-play today! 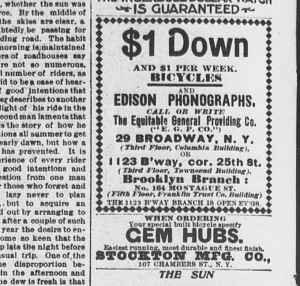 Another advertisement from 1898 presents Edison records at just “$5.00 a dozen”, found at the St. James Building at Broadway and 26th Street.  Of course, a great many of these records were spoken word, not music;  after all, they were nicknamed ‘talking machines’ at this time. 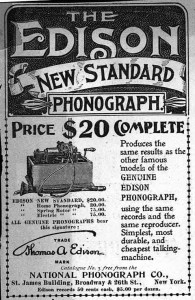 I was able to find a few other early photographer retailers in old newspaper advertisements.  For instance, Douglas & Co., at 10 West 22nd Street, appears to be one of New York’s earliest retailers specializing in recorded sound.  From Dec 16, 1900: 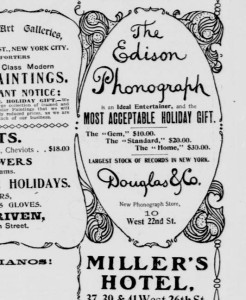 By 1903, Douglas & Co. had moved downtown, closer to the electronic retailers that would later specialize in radio and televisions: 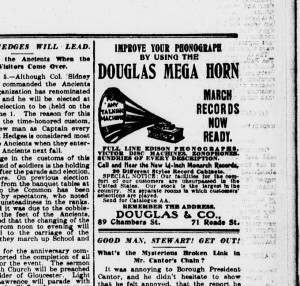 Another early phonograph retailer I was able to locate was A.B Barkelew & Kent.  “Call and hear them. They talk themselves.”  They would eventually move to Vesey Street and, in 1902, claim “the largest stock in New York.” 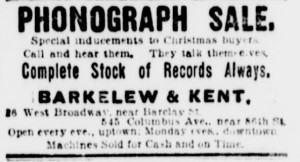 As early in 1899, Barkelew & Kent could claim to be one of New York’s first used record stores.  From a trade ad: “We exchange records you tire of and do not like.”

Interestingly, early record stores were listed alongside advertisements for sporting goods.  This ad is from May 1902: 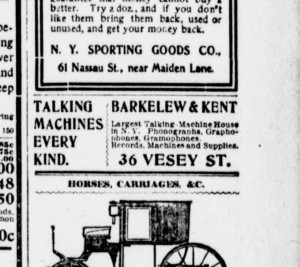 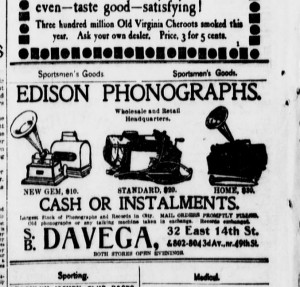 And since we’re celebrating the opening of a new record store in Brooklyn, I should add that one of Brooklyn’s first major record stores was at A.D. Matthews Department Store on Fulton Street.

From an April 1900 advertisement: 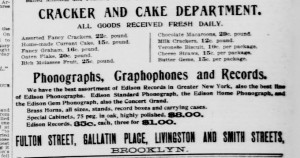