On Wednesday, January 1, 2014, Bill de Blasio will be inaugurated at City Hall to become the 109th Mayor of New York City, sworn in by President Bill Clinton.  Mayoral inaugurations are never very exciting, but they’re often reflected upon later as setting the tone for an administration, a clue to a possible style of governance.

A fine, athletic example that Mayor-elect de Blasio might consider would be that of William J. Gaynor, who celebrated his inauguration on January 1, 1910, by walking from his home that day in Park Slope, over the Brooklyn Bridge to City Hall.  Brooklyn had been a part of Greater New York for only a decade by that point, and Gaynor one of its most esteemed residents.  Nobody doubted Gaynor’s pride that day in his home borough.  (De Blasio is also from Park Slope; his home is about ten minutes away from Gaynor’s residence on Eighth Avenue.)

Below: Mayor-elect Gaynor as he strolled across the bridge to City Hall

Four years later — after Gaynor died in office, from the internal injuries of an assassin’s bullet — New Yorkers elected the reformer John Purroy Mitchel.  He also made a bold statement during his inauguration on January 1, 1914, although one that cast a lingering pall over his subsequent accomplishments. 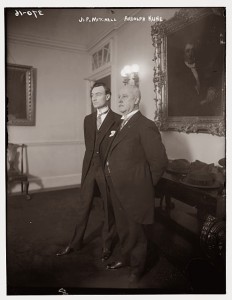 Unfortunately for the young mayor-elect, he suffered from intensely painful headaches, and that morning, as he arrived at 9 a.m., Mitchel could barely withstand the pressure.

After greeting a few well-wishers and a brief meeting with reporters, he was sworn in during a private ceremony, made a five minute speech, then escaped into his private office, even as thousands lingered in the hallways and around City Hall for hopes of something — anything in the way of celebration — to occur.

Mitchel was noticeably aggravated and avoided any major announcements (such as the hotly contested job of Police Commissioner).

Early on, the police even dismissed the official receiving line of well-dressed politicians, the phalanx leaving with their hands unshaken.  This was a slight that many would never forget.  “[T]he reception room and corridor outside his office carried all the surging, bustling human exhilaration of Grant’s Tomb,” said the Evening World, who characterized the ceremony as “the most cheerless day ever known in City Hall.”

Many would consider this a hallmark of Mitchel’s style — distant and removed, hardly politic — a demeanor which would eventually label him as an elitist. 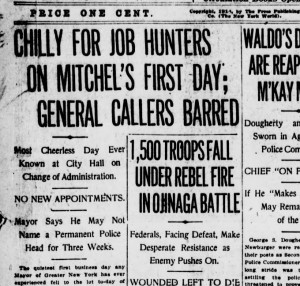 For more on Gaynor, Mitchel and the tumultuous politics of 1914, check out our podcast on The Boy Mayor Of New York (Episode #156).