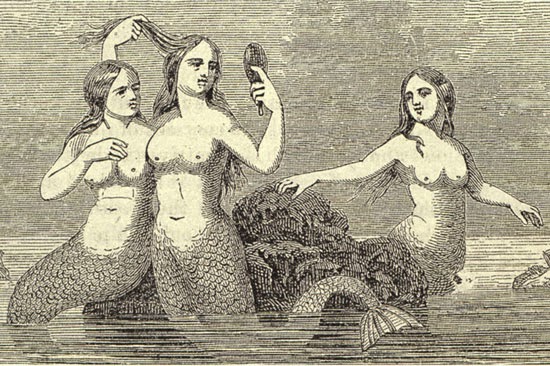 This sickening Frankenstein monster — comprising a monkey’s head sewn onto a fish torso — was displayed in Â PT Barnum’s American Museum off and on for almost twenty years. Â Believe it or not, Barnum actually leased it from an owner who had bought it off of sailors. Â It’s actual connection to the Fiji Islands remains tenuous at best.

“[M]any naturalists and scientific men who have examined it assert that it is absolutely the work of Nature. Others however insist that its existence is a natural impossibility. Â When doctors disagree, the PUBLIC must decide.”

Here’s how the mermaid was advertised in the newspapers: 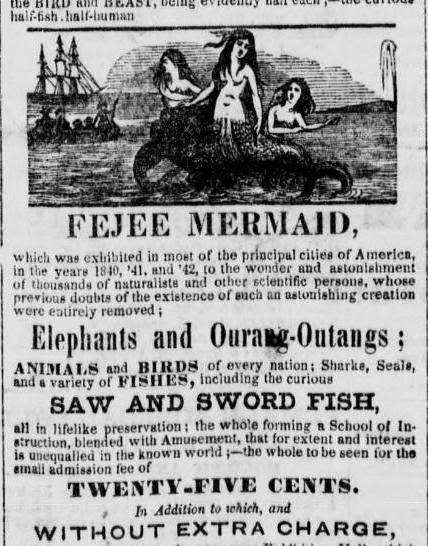 This was classic Barnum bait-and-switch. Â In fact, he relied on the artifact’s somewhat disappointing appearance to give it a bit of authenticity. See, why would I fake something that looked like this? was the implication.

The mermaid first arrived in New York in November 1842 after a smash debut in Boston,”where her ladyship [referring to the mermaid] has astonished thousands of visitors.” Â Thousands flocked to Barnum’s display at a space called Concert Hall (at 404 Broadway) to take in a glimpse of this bizarre creature. Â In its first week at the American Museum, Barnum raked in three times his average revenue.

From Barnum’s autobiography: “The public appeared to be satisfied, but as some persons always will take take things literally, and make no allowances for poetic license even in mermaids, an occasional visitor, after having seen the large transparency in front of the hall, representing a beautiful creature half woman and half fish, about eight feet in length, would be slightly surprised in finding that the reality was a specimen of dried monkey and fish that a boy a few years old could easily run away with under his arm.”

So popular was the exhibit that the old museum of Rubens Peale in today’s City Hall Park debuted its own mermaid, a parody monster called the Fud-Ge Mermaid: 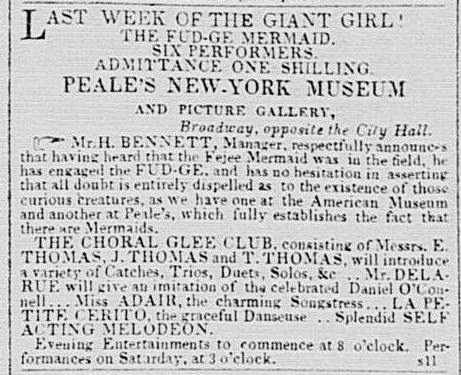 By the 1850s, the Fejee Mermaid was one of a cast of oddities featured at Barnum’s museum. By this point, the grotesque object was probably a commons sight for regular museum goers. Â I imagine it, perhaps, with a light coating of dust, possibly a cobweb. Â Below: An advertisement from the Daily Tribune, 1855: 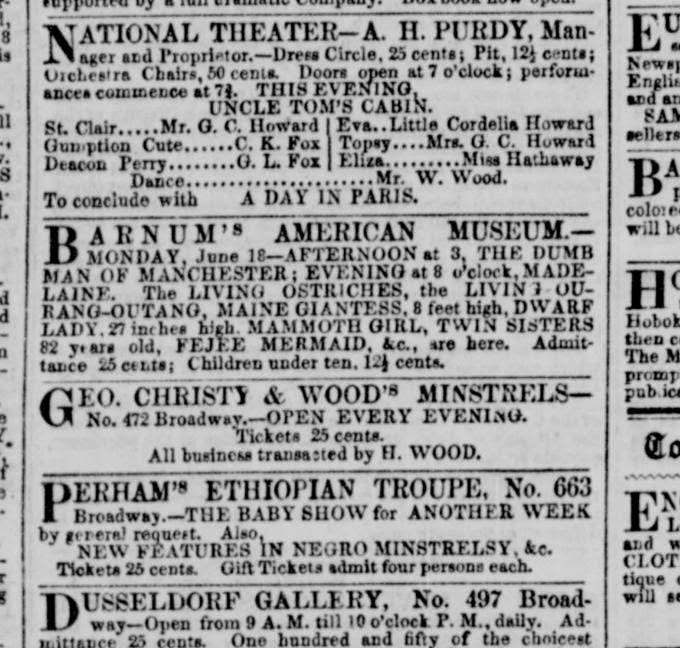 Whatever became of the mermaid? Â Some say she disappeared during a fire at the museum. Â I’m not sure she was still there when Confederate spies attempted to burn down the museum on November 25, 1864. Â But she lives on as an icon of fabulous hoax, “one of the most scientific fakes ever perpetrated upon the American public.” [source]

And she lives on in our hearts. How can you resist a face like that?

(This article originally ran on this blog in June 2014)

The Fiji mermaid looks like one of many manufactured in the Far East in the nineteenth century; The British Museum has one very similar and there are more.
https://www.britishmuseum.org/explore/highlights/highlight_objects/asia/m/merman_part_monkey,_part_fish.aspx

The sketch of the creature is exactly what I saw.
At the time, I was a young Provisions Master; today, a Chaplain for what it is worth.
Here is my testimony before God, and to all;
From the wheelhouse, on watch, from the Starboard observation deck of the M/V Regent Sea in 1990 off the Coast of Cuba, on the way to Bermuda.
This creature was swimming on its back off our starboard bow, in the bow water as they broke. This is where the dolphins swim, except this creature was on its back looking up, looking up and swimming at about 15knts, keeping pace.
It was not doing much diving except to match us, it was a very strong swimmer.
I could see it was working very hard to keep pace. I understood this by the expressions on its face, the breathing, the air struggle, and the over-all strain of the body and muscle structure. This was a mammal, no question.

It made eye contact with me for a minute or so, on and off. It was fully aware of me, and our eye contact was long enough for me to understand it was able to process information, and was at least as smart as an average dog.

I remember thinking I would never want to be in the water near that thing, and since, I have not spent much time in the water, it was actually a scary feeling see such a creature.

I saw the face, and upper body trunk very clearly. It was about 1.5, perhaps 2 meters in total length compared to the wave and how clearly I could see the details.
It had very sharp looking and jagged teeth that were not covered by ‘lips’, but there seemed to be like, fish-lips there. I felt some kind of evil radiating, it was not a good feeling and this was, just not a good thing and from something different to be aware of.
Its arms and fingers; I do not recall the fingers being webbed, but I was not looking for that. (didn’t count the fingers either, but five would be my guess)
It had the structural size of an average human child of about 10 years standing 1.5+ meters, and the arms seem to have an appropriate length and strength.
I seemed to recognize it was a male, not sure why, but I notice the ‘sketch appears to show a female? from others eye witness accounts. I will testify, the diagram presented here is a very accurate likeness to my experience.
The body appeared to be more ‘fish-like’, with arms of proportion.
The colour seemed to be, more reptile, the fish-like scale-y would agree with this observation.

It was the eyes and face that really caught my attention the most. I was fascinated and very aware, that ‘it’ was very aware of me. This creature has intelligence, and I guess lives in pods or groups.

I am Chaplain Brent David
I testify this to be a true and accurate account.