Ravenswood is a dramatic name for a New York City neighborhood and certainly wasted on its primary resident today — Big Allis, the Con Edison generating power station that provides the Queens waterfront with its most unattractive feature. This pocket district is situated on the western edge of Queens just north of Hunter’s Point. Situated near the power station are two quiet parks — Queensbridge Park and Rainey Park which pay homage to the neighborhoods most striking landmark — the Queensboro Bridge — and the bridge’s most ardent proponent Dr. Thomas Rainey.

There’s little indication of it today, but over 150 years ago, this narrow ridge of land on the East River waterfront was once the most exclusive neighborhood on Long Island. It was indeed a ‘narrow’ stretch for the eastern side was hemmed in by a massive swamp. (The Ravenswood Houses sits on the spot of the old swamp.)

Among the first English settlers, the land was originally owned by Captain John Manning, then by Robert Blackwell. Both men also owned the island in the East River, today’s Roosevelt Island. (In fact, the island wore Blackwell’s name for over two centuries. Listen to our show on Roosevelt Island for more information.) It wasn’t until 1814 that a US mineralogist named Col. George Gibbs bought up this property and begin chopping up the lots for sale to wealthy merchants who desired large estates with a waterfront vista.

Nobody knows definitely where the name came from. One theory suggests it was named for the bishop of North Carolina — John S. Ravenscroft — and later altered. Author Vincent Seyfried gives a couple more romantic suggestions, “that there were a lot of native American ravens in the neighborhood, and that Ravenswood is a name figuring prominently in Sir Walter Scott’s “Bride of Lammermoor”, a historical romance popular in that day.”

Below: From the David Ramsey Map Collection — a 1836 view of Blackwell’s Island and Ravenswood

By the 1850s, both Blackwell’s Island and Ravenswood were frantic with new construction — Blackwell with new public institutions like the almshouse, Ravenwood with sumptuous estates. From a local newspaper in 1852: “Buildings are going up in every direction and much taste is manifested by the owners in arranging and decorating their grounds. ”

Below: The Delafield house which was owned by George Gibbs

Most of the new residents were New York merchants enriched with the city’s growing fortunes, stimulated large by the construction of the Erie Canal. Almost none of them came from old families (who had manors in other parts of the region). Looking though a list of Ravenwood landowners from the 1850s, you’ll find mirror manufacturers, grocers, meat packers, doctors, insurance salesmen and Wall Street bankers.

Below: An example of a Ravenswood property, from an engraving by Alexander Jackson Davis (ca. 1836) 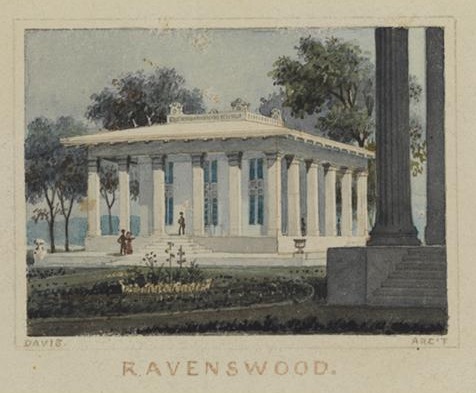 From the Queens Gazette, 1953: “Ravenswood — Â That beautiful village, so picturesquely located on the banks of the river, is improving rapidly and its present rate of increase will soon complete the chain of city and village which stretches almost from the Narrows to beyond Hell Gate.”

A unique feature of these new development was the public promenade (seen in the map image above). While lots were granted to the edge of the East River, a public walkway was carved into the properties so that neighbors could enjoy the impressive views.

Below: Ravenswood and its promenade, from an engraving by Alexander Jackson Davis (1850)

Of course you might ask — wasn’t the back of Blackwell’s Island an unsightly mess by the late 19th century? It became the home of penitentiaries, asylums, workhouses and various hospitals. Well, by the time it got it got too unfortunate, the era of aristocratic Ravenswood was over.

Hunter’s Point, south of Ravenswood, was rapidly becoming a dense, industrial zone by the 1860s, endangering any bucolic peace that this new mansion row would have enjoyed. The swamp to the east — called Sunswick Swamp or Ravenswood Swamp — and the mosquitos it attracted created a serious health crisis with frequent malaria outbreaks.

In 1870, Ravenswood was absorbed into the district of Long Island City, encompassing all the village and hamlets of northwestern Queens, including Astoria and the new company village of Steinway & Sons. While this incorporation was a great benefit to the region overall — rapidly bringing utilities and municipal support — it eventually destroyed the small residential haven of Ravenswood.

A gas works was constructed in 1875 on the waterfront at 37th and 38th Avenues, the precise spot today of Big Allis. Residents almost immediately began fleeing.

In 1877, the Newtown Register lamented, “The aristocratic neighborhood of Ravenswood is beginning to be invaded by factories. We observe a large brick structure run up which will be devoted to canning fruits. The location of this factory is at the southern end of the neighborhood. The gas house on the water’s edge near the old Blackwell house may be considered another invasion, and like Union Square, New York, we may suppose these temples of industry to be ‘the beginning of the end’. [This is reference to New York’s Gas House District, on the spot of today’s Stuyvesant Town – Peter Cooper Village.]

Already one aristocratic mansion is converted into a summer hotel and restaurant. Such is change, such is life.”

By 1905 even the promenade was gone. All traces of Ravenswood were eliminated save one — Bodine CastleÂ atÂ Vernon Boulevard and 43rd Avenue (pictured below).Â It too was demolished in 1966. 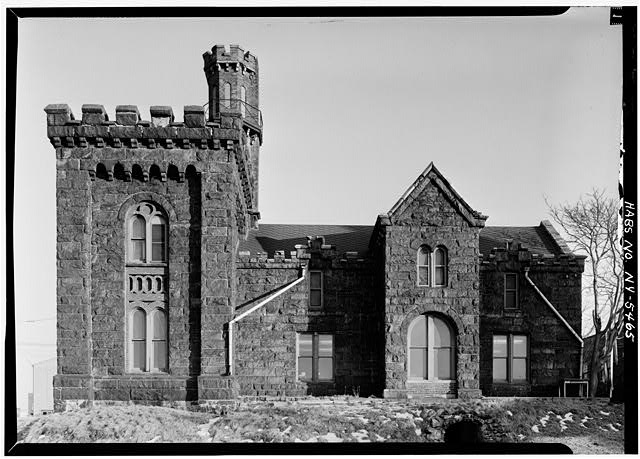 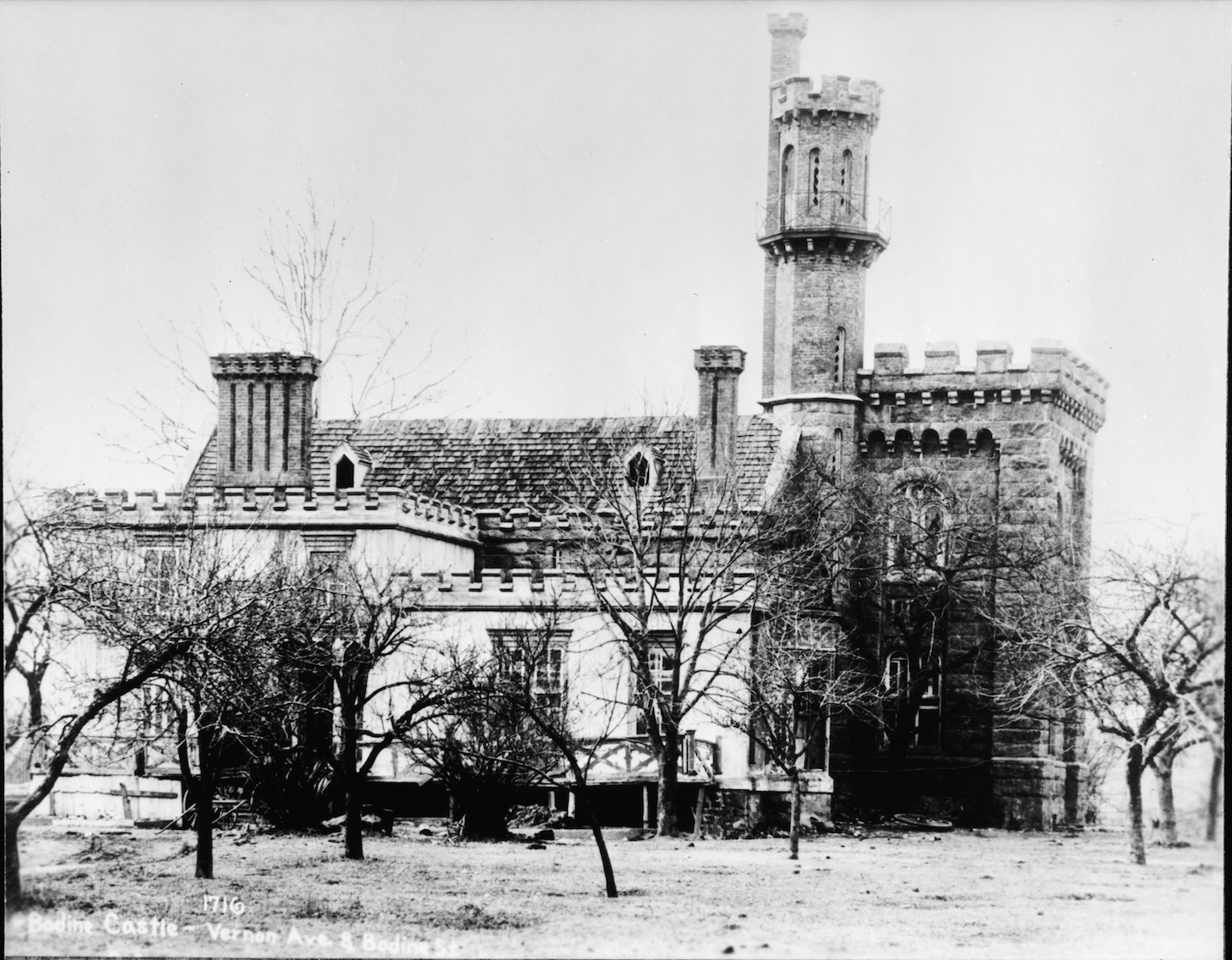 The area is now best known for this:

[My thanks to Vincent F. Seyfried and the Greater Astoria Historical Society for help with this research.]

4 replies on “The Fall of Ravenswood, Old Aristocratic Queens”

I would still like to purchase your publication with photos about Astoria from 2009.Are you still located above Quinn Funeral Home on Broadway Astoria?

No, the Quinn Funeral Home is not a vacant building. We have moved. Please email us at astorialic@gmail.com

My Great Grandfather owned a house at what was 228 Hancock St Ravenswood. I know he lived there in 1900, I have been trying to figure out where 228 Hancock Street would be located today. I understand he sold the house sometime between 1925 and 1927 when he passed away. He bought another house at 412 Hopkins in Ravenswood I am also trying to figure out where that house would be located today. Can You help me?

Clyde Quinn, Hancock Street was current day 10th Street. Hopkins Ave was current day 14th Street, though Ravenswood Houses and LIC High School breaks it into smaller pieces now. I might be able to help you narrow down the addresses, and maybe you can help me learn more about Ravenswood history. You can email me at s.ayala.ny[at]gmaildotcom