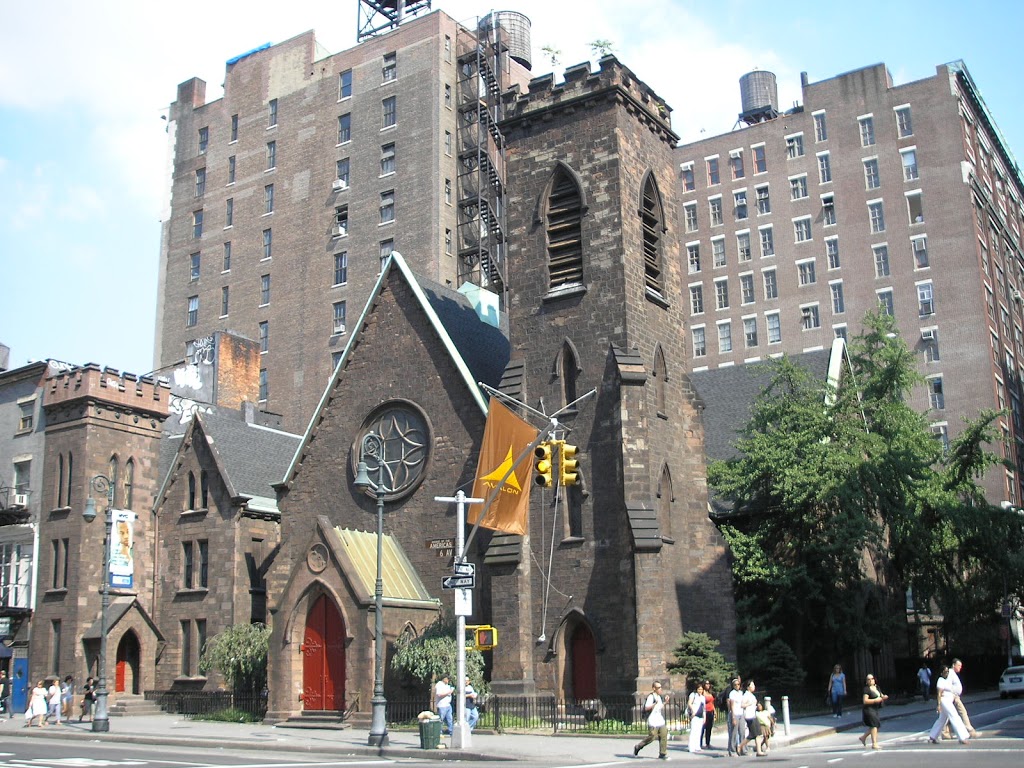 Above: The Church of the Holy Communion — and once the quite infamous nightclub Limelight — as the less lauded follow-up, called Avalon.  Within a couple years, the club would be transformed again — into a high-end retail experience.  Below: Michael Alig, one of its more notorious nightly residents. (source)

PODCAST If you had told 1840s religious leader William Augustus Muhlenberg that his innovative new Church of the Holy Communion, designed by renown architect Richard Upjohn, would become the glittering seat of drugs and debauchery 150 years later, he might have burned it down then and there.

But thankfully, this lovely building is still with us, proving to be one of the most flexible examples of building use in New York City history.

This unusual tale begins with the captivating relationship between Muhlenberg (the grandson of America’s first Speaker of the House) and Anne Ayres, the First Sister in charge of the Sisterhood of the Holy Communion. The two of them helped create one of New York’s great hospital centers. But was something else going on between them?

The Church of the Holy Communion survives the elevated railroad and the fashionable stores of Ladies Mile, and weathers the various fortunes of the neighborhood.  When it is finally sold and deconsecrated, it briefly houses an intellectual collective and a drug rehabilitation center before being bought by Canadian club impresario Peter Gatien, who turns it into the Limelight, an iconic and sacrilegious symbol of New York nightlife.  And in recent years, the old church has morphed into a rather unique retail experience — shopping mall and department store!

William Augustus Muhlenberg, grandson of Frederick Muhlenberg (America’s first Speaker of the House), was a visionary religious leader.  He opened Church of the Holy Communion as a way to further his progressive religious views.  Pictured below in a carte de visite, probably in the 1860s. (Courtesy NYPL)

Muhlenberg’s reputation was greatly bolstered by Anne Ayres, who became the leading sister as the Reverend’s  Sisterhood of the Holy Communion, the first Anglican convent of its kind in America.  Ayres helped Muhlenberg with most of the church’s major projects and penned an ecstatic biography after his death.  You can read Ayres’ biography of Muhlenberg here.

Muhlenberg and Ayres founded a small infirmary near the church, then later expanded it at Fifth Avenue and 54th Street, becoming the first location of St. Luke’s Hospital.  As you can tell from the original hospital building, it seems to reflect a bit of the architecture of the Church of the Holy Communion. (Pic courtesy NYPL)

A view from 1895, possibly of a Sunday crowd leaving the church. Vendors like this pretzel seller gathered on the street below, selling treats to shoppers of Ladies Mile.  The church would have been in the heart of New York’s major shopping district during the Gilded Age, with grand department stores stretching on either  side of the street. (Courtesy the Museum of the City of New York)

The Church of the Holy Communion, enveloped in thick ivy, as it looked in September 1907.  It also appears this photo was taken in the early afternoon, as the shadow of the elevated railroad begins to creep across the street. (Courtesy Museum of the City of New York)

Peter Gatien, pictured here in a 1993 issue of New York Magazine. The Canadian club owner bought the old church and transformed it into a nightclub in 1983.

The Limelight was a celebrity hotspot from the very opening in 1983.  When William Burroughs had his 70th birthday at the club in 1984, the young new superstar Madonna came by to wish him well. (Photo by Wolfgang Wesener, courtesy here)

But why conjure real celebrities when you could make some yourself!  By the early 1990s, the club kid set the tone for the Limelight, further turning the old church of Muhlenberg into a surreal playground of music and drugs.