BOWERY BOYS BOOK OF THE MONTH

I re-read The Great Gatsby a few weeks ago on purpose, not because I had a school assignment. Unlike my first experience with Gatsby at age 14, I actually read it, without the signposts of a Cliff’s Notes to tell me what I was supposed to be getting from it.

Of course the impetus for re-discovering F. Scott Fitzgerald‘s masterpiece is the flashy new Baz Luhrmann film coming out this weekend, which uses the text as an excuse to throw an expensive 3-D party, starring Leonardo DiCaprio, Beyonce, large champagne bottles, fifty shades of pink, the ghost of Mae West and a whole host of other drunk guests. 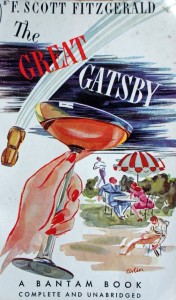 Few works of American literature have been as comprehensively analyzed as The Great Gatsby, by which I mean, of course, over-analyzed. One reason I’m excited about the film, with all its superficial decadence on display, is that it seems to discard several decades of nine-dimensional analyses that have settled upon the book like a thick shroud of dust. Maybe that’s wearing white to a funeral, so to speak, but true masterpieces can weather an occasional glare.

The Great Gatsby deserves to be savored for many reasons that I had forgotten or never noticed through the filter of creating a B+ term paper in my teenage years.  It’s one of the most economic stories of the 20th century, an exercise of graceful control, an epic with powerful restraint.  In comparison, try reading Fitzgerald’s The Beautiful and the Damned — an embittered New York book twice as long with half as much to say– to appreciate the brevity of Gatsby.

Fitzgerald uses the locales of 1922 New York City so precisely — jetting around Long Island and over the bridge to Manhattan — that it seems almost possible to map the characters’ every move.

There are three principal types of locations in The Great Gatsby.  About half the novel’s actions take place on either East Egg or West Egg, fictional northern Long Island villages still graced with the mansions of Gilded Age millionaires.

Characters escape to Manhattan, big and glittering, either to entertain their mistresses or to dine with gentlemen of suspicious occupation.

And then, of course, there’s the wasteland in between, where secrets are laid bare and burnt to ash.  Welcome to Queens!

Fitzgerald paints a very lush, cockeyed view of New York City in the early 1920s. Here are some of the more interesting city locations you’ll visit as you read along, and some of the words he used to describe them: 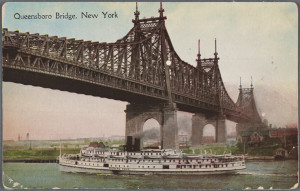 ‘Anything can happen now that we’ve slid over this bridge,’ I thought; ‘anything at all….’

Even Gatsby could happen, without any particular wonder.”

The 1920s were more than just a decade of speakeasies and spendthrifts. It was the decade of immense growth for Manhattan’s outer boroughs, none more so than Queens, thanks mostly to the opening of the Queensboro Bridge in 1909 and a connection to New York’s new subway system.

The IRT Astoria line
“[W]e sped along toward Astoria at fifty miles an hour, until, among the spidery girders of the elevated, we came in sight of the easy-going blue coupe.”

Astoria’s elevated subway train opened in 1917, at the time servicing only cars from the IRT. (The trains of the BMT are a little too wide to use the stations.)  So as Gatsby, Nick Carraway and the gang race underneath it to get onto the Queensboro, they’re really experiencing something quite new, a symbol of New York’s expansion into Queens. 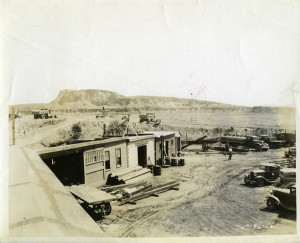 Corona Ash Dumps
“We passed Port Roosevelt, where there was a glimpse of red-belted ocean-going ships, and sped along a cobbled slum lined with the dark, undeserved saloons of the faded-gilt nineteen-hundreds.  Then the valley of ashes opened out on both sides of us.”

Once the place where New York and Brooklyn dumped their ash from coal-burning furnaces, the old ash dumps of Corona turned a bit of Queens into a gloomy and unpleasant landscape.  It would take Robert Moses and dreams of a World’s Fair to transform the ashen landscape into Flushing Meadows-Corona Park in the 1930s. (Picture courtesy the Queens Museum) 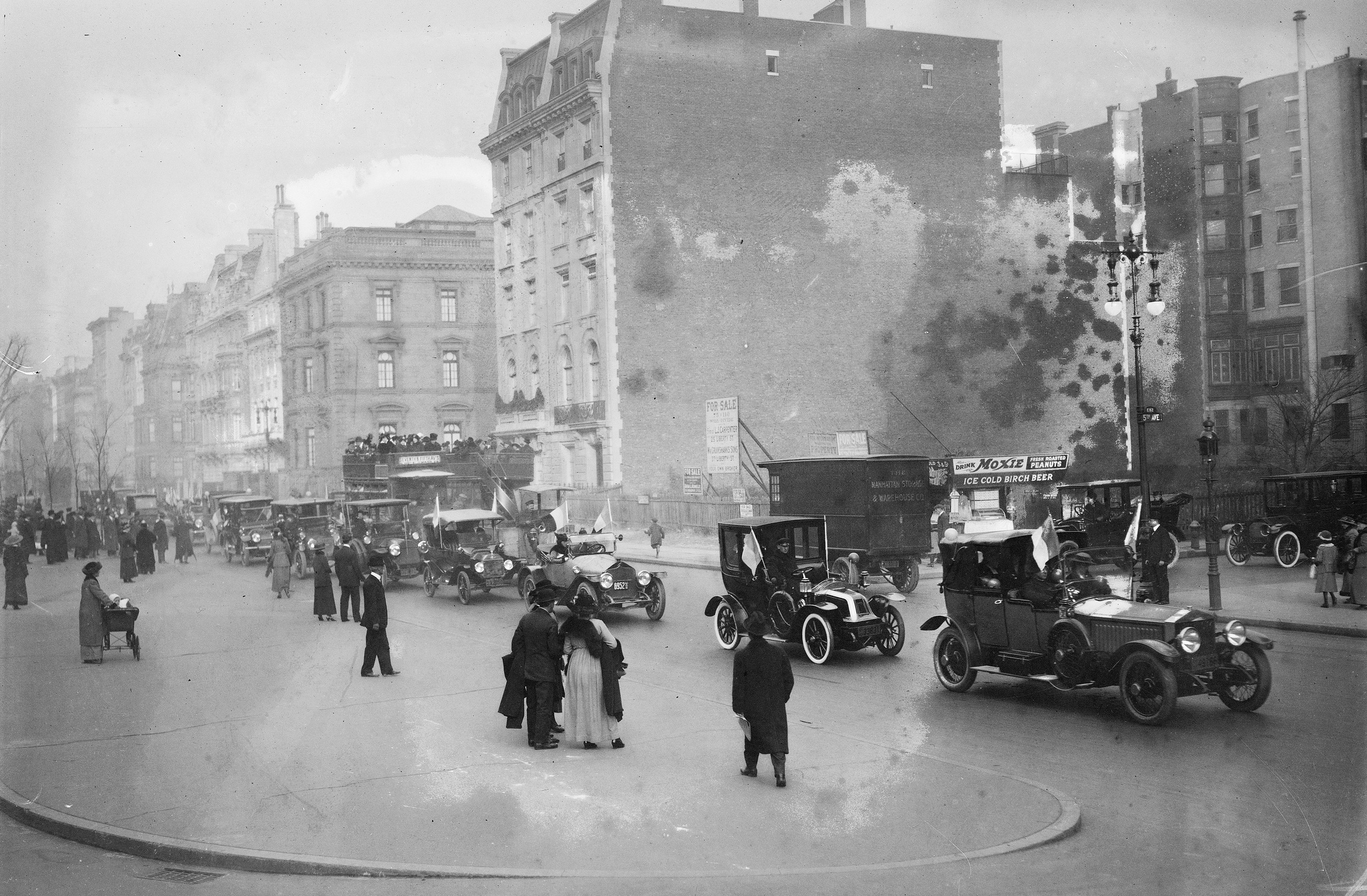 Upper Fifth Avenue
“We drove over to Fifth Avenue, so warm and soft, almost pastoral, on the summer Sunday afternoon that I wouldn’t have been surprised to see a great flock of white sheep turn the corner.”

This was not as bizarre as it sounds, for nearby Central Park actually had sheep grazing in it until 1934.  Granted, they would have been on the other side of the park, in today’s aptly named Sheep Meadow. 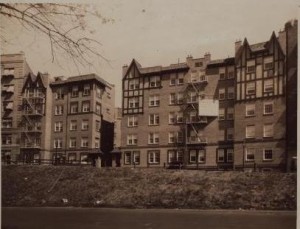 Washington Heights
“We went on, cutting back again over the Park towards the West Hundreds. At 158th Street the cab stopped at one slice in a long white cake of apartment-houses. Throwing a regal homecoming glance around the neighborhood, Mrs. Wilson gathered up her dog and her other purchases, and went haughtily in.”

Once the respite of wealthy manors in the 19th century, the upper reaches of Manhattan gave way to middle-class housing at the start of the new century.  Myrtle’s perch here in Washington Heights would have been appropriately out of the way in the 1920s. 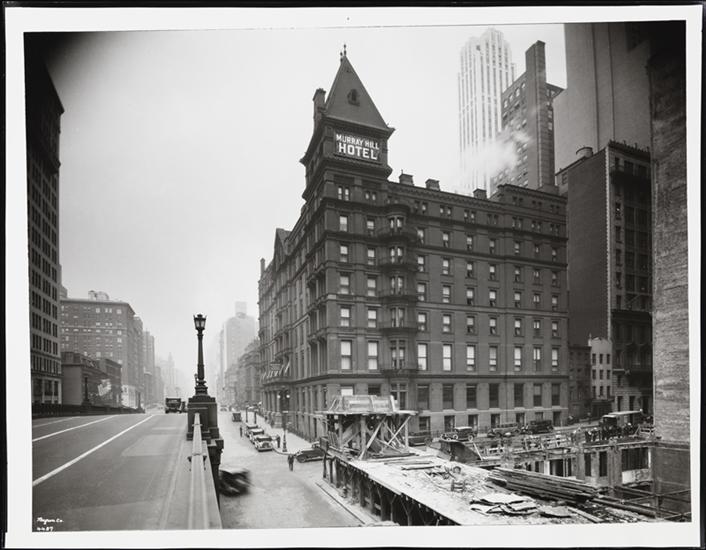 The Murray Hill Hotel on Park Avenue, 1931, courtesy Museum of the City of New York

“After that, if the night was mellow, I strolled down Madison Avenue past the old Murray Hill Hotel and over 33d Street to the Pennsylvania Station….I liked to walk up Fifth Avenue and pick out romantic women from the crowd and imagine that in a few minutes I was going to enter into their lives, and no one would ever know or disapprove.”

Opening in 1884 to serve the needs of those arriving from Grand Central Depot, the Murray Hill Hotel kept its halls fully occupied until its demolition in 1946.  The Daytonian In Manhattan blog has a wonderful tale of the hotel’s colorful history. 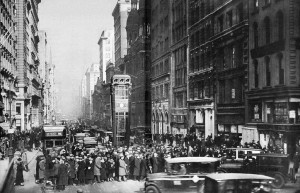 “Roaring noon. In a well-fanned Forty-second Street cellar I met Gatsby for lunch. Blinking away the brightness of the street outside, my eyes picked him out obscurely in the anteroom, talking to another man.” 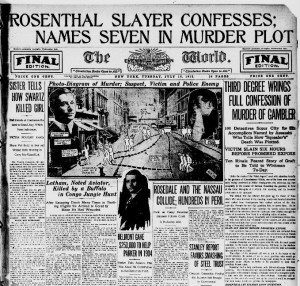 From the July 16, 1912 edition of the New York Evening World

Hotel Metropole
“The old Metropole,” brooded Mr. Wolfsheim gloomily.  “Filled with faces dead and gone. Filled with friends gone now forever. I can’t forget so long as I live the night they shot Rosy Rosenthal there.”

The Hotel Metropole was a swanky Times Square hotspot located at 147 W. 43rd Street.  Mr. Wolfsheim (himself a stand-in for gangster Arnold Rothstein) spends a moment recounting the assassination of Herman Rosenthal, gunned down by the mob.  Charles Becker, who was accused of orchestrating the murder, became the first police officer to ever be given the death penalty.

We talk about the Rosenthal assassination in our podcast Case Files of the New York Police Department. 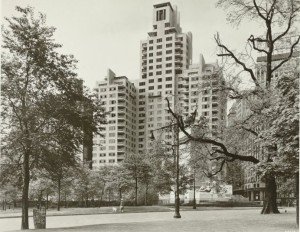 Above: The southwest corner of Central Park, photo by the Wurts Brothers (NYPL)

Central Park
“When Jordan Baker had finished telling all this we had left the Plaza for half an hour and were driving in a victoria through Central Park. The sun had gone down behind the tall apartments of the movie stars in the West Fifties, and the clear voices of little girls, already gathered like crickets on the grass, rose through the hot twilight.

We passed a barrier of dark streets, and then the facade of Fifth-ninth Street, a block of delicate pale light, beamed down into the park.” 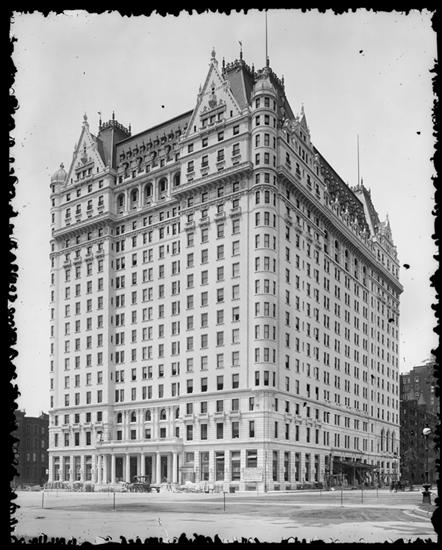 The Plaza, photo by the Wurts Brothers (NYPL)

“And we all took the less explicable step of engaging the parlor of a suite in the Plaza Hotel.

The room was large and stifling, and, though it was already four o’clock, opening the windows admitted only a gust of hot shrubbery from the Park.”

The Plaza Hotel
The beginning of a string of violent acts in the book begins here at The Plaza, at perhaps the epitome of class in the early 1920s. It was only open about 15 years when the events of the book take place here.

Check out our podcast history of the Plaza Hotel and some more glamorous pictures of the hotel here.

7 replies on “The Great Gatsby’s New York City, in ten different scenes, from the Queensboro Bridge to the Plaza Hotel”

I read this book (of course, I also saw a film) and I was so curious about some places 🙂 I found this post and I traveled with Nick and Jay throught NYC :o) I do it very often when the book capture me 🙂 So thank you for this post 🙂

I read this book (of course, I saw a film two) and I was so curious about some places 🙂 I found this post and I traveled with Nick and Jay throught NYC :o) I do it very often when the book capture me 🙂 So thank you for this post 🙂
Best regards, Suzi.

Really good job! Thank you, this was very helpful!

I would like to recommend Maureen Corrigan’s recent book on the Great Gatsby: “So We Read On: How the Great Gatsby Came to be and Why it Endures.” By the way, Maureen’s a Queens native. The New York Public Library also highlighted it as a must read on their website.

I would like to recommend Maureen Corrigan’s recent book on the Great Gatsby: “So We Read On: How the Great Gatsby Came to be and Why it Endures.” By the way, Maureen’s a Queens native. The New York Public Library also highlighted it as a must read on their website.

Love hearing about NYC in books. Have of course read both books but will have to recheck the Fitzgerald.