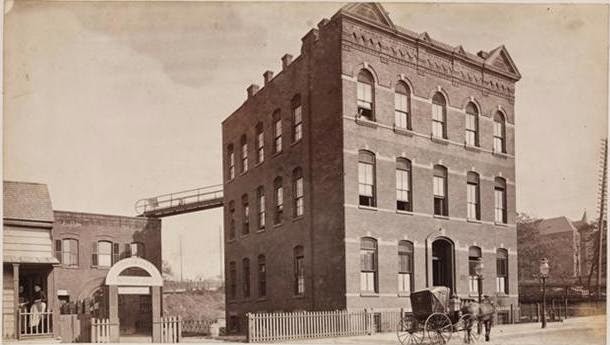 Photographed dated 1886, the institution was called Manhattan Hospital then, changing its name to J. Hood Wright Memorial Hospital, then to Knickerbocker Hospital in 1913 (Picture courtesy the Museum of the City of New York)

Friday begins the showing of The Knick on Cinemax, a historical drama set in the turn-of-the-century Knickerbocker Hospital. Last year, Tom wandered around the Broome Street set of The Knick. (Check out his pictures here.)  Are you checking this out live this Friday night (August 8, 10 pm)?  Follow along with me on Twitter where I’ll try and keep up with historical tidbits about the era and the events that are depicted.

Although the hospital depicted in the show is technically fictional, there was a Knickerbocker Hospital in New York during this time period. It will be interesting to see if the show’s institution bears any resemblance to the real Knickerbocker:

Knickerbocker Hospital
Location: Covent Avenue and 131st Street
The hospital depicted in The Knick is much, much further downtown.  However, with the arrival of elevated trains and, later, the subway, some new immigrants would have settled in upper Manhattan to escape the crowded tenements. So the types of patients treated at these institutions would have been similar.

Purpose:  According to the 1914 Directory of Social and Health Agencies, “Gives free surgical and medical treatment to the worthy sick poor of New York City.  Incurable and contagious diseases and alcoholic, maternity and insane patients not admitted.  Emergency cases received at any hour.”
Statistics:  In 1914, they had 57 beds, 1,096 cases treated in a year
Funding: Care is free to “the worthy poor” and the hospital is supported by a charitable contribution

History:  The hospital began its existence as the Manhattan Dispensary in 1862, located in upper Manhattan when it pretty much looked like this:  (Image courtesy the US National Library of Medicine)

Mr. Wright died suddenly on November 12, 1894, collapsing at an elevated train station on Rector Street, never regaining consciousness. In honor of his contributions, the hospital was renamed the J. Hood Wright Memorial Hospital, although, from reading the news clipping below, it seems that was not a great idea.

The name change was facilitated by a lack of funding for the hospital.  In 1910, hospital executives blatantly proclaimed “the hospital was inadequate to serve the needs of the west side of Harlem.”

“The J. Hood Wright Memorial Hospital, which was incorporated in 1868 as the Manhattan Dispensary, has got permission from Supreme Court Justice Page to change its name to the Knickerbocker Hospital.

The hospital managers and Mr. Wright’s heirs believe that the present name of the hospital leads to the belief that it is so liberally endowed it does not require outside assistance and for this reason, none have been forthcoming.  They say Mr. Wright desired outsiders to contribute.”

J. Hood Wright is memorialized in a public park just off the Manhattan approach to the George Washington Bridge. located on the land where Mr. Wright’s mansion once stood.

At right: A photo of the old Wright house. You can see the George Washington Bridge in the background. (Courtesy Museum of the City of New York)

The Knickerbocker’s neighborhood of Harlem became the heart of New York’s African-American culture, but hospital staffing did not reflect this change.

There were many reported incidents of black patients being poorly treated here during the 1920s and 30s.  According to author Nat Brandt, the wife of W.C. Handy “lay critically ill in an ambulance for more than an hour while officials of Knickerbocker Hospital discussed whether to admit her.” [source]

In May 1959, Billie Holiday was admitted here after collapsing in her apartment, but her liver and heart disease were so advanced that she was transferred to a hospital better suited for treatment. (She died a few weeks later.)

Knickerbocker Hospital remained open until the early 1970s when mounting debts almost forced it to close.  The state of New York took it over and renamed it Arthur C. Logan Memorial Hospital after a prominent black physician.  That hospital seemed to suffer from the same financial woes as the others and eventually closed for good in 1979.

I’m looking forward to doing more research on New York’s medical institutions in the coming weeks, and I hope the show does it justice!

A scene from The Knick. There will be blood, I believe…