PODCAST One World Trade Center was declared last year the tallest building in America, but it’s a very different structure from the other skyscrapers who have once held that title. In New York, owning the tallest building has often been like possessing a valuable trophy, a symbol of commercial and social superiority. In a city driven by commerce, size matters. 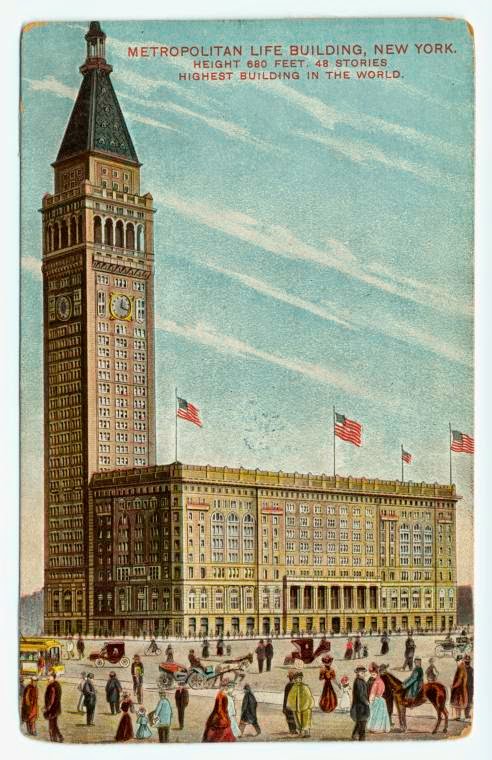 In this special show, I give you a rundown of the history of being tall in New York City, short profiles of the 12 structures (11 skyscrapers and one church!) that have held this title.  In several cases, these weren’t just the tallest buildings in the city; they were the tallest in the world.

At right: The Metropolitan Life Building, the tallest building in the world in 1909

Skyscrapers were not always well received.  New York’s tallest building in 1899 was derisively referred to as a “horned monster.”  Lower Manhattan became defined by this particular kind of structure, creating a canyon of claustrophobic, darkened streets.  But a new destination for these sorts of spectacular towers beckoned in the 1920s — 42nd Street.

You’ll be familiar with a great number of these — the Woolworth, the Chrysler, the Empire State.  But in the early days of skyscrapers, an odd assortment of buildings took the crown as New York’s tallest, from the vanity project of a newspaper publisher to a turtle-like tower made for a sewing machine company.

At stake in the race for the tallest is dominance in the New York City skyline.  With brand new towers popping up now all over the five boroughs, should be worried that they’ll overshadow the classics? Or should the skyline always be in a constant state of flux?

ALSO: New York’s very first tall buildings and the ominous purpose they were used for during the Revolutionary War! 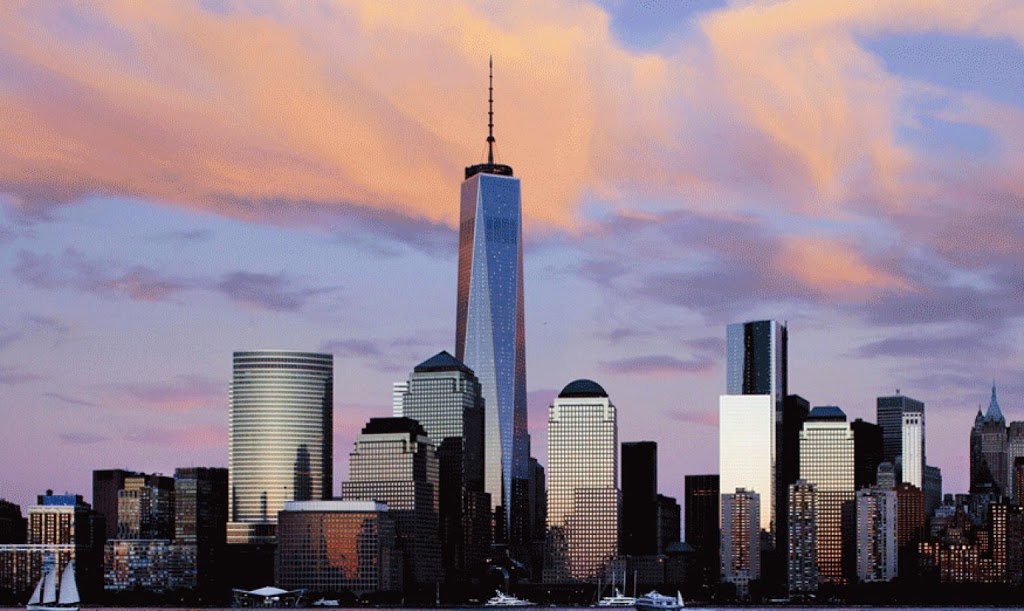 The sugar houses owned by the Rhinelander family. Others owned by the Van Cortlandts and the Livingstons would have all been the tallest structures in the city. 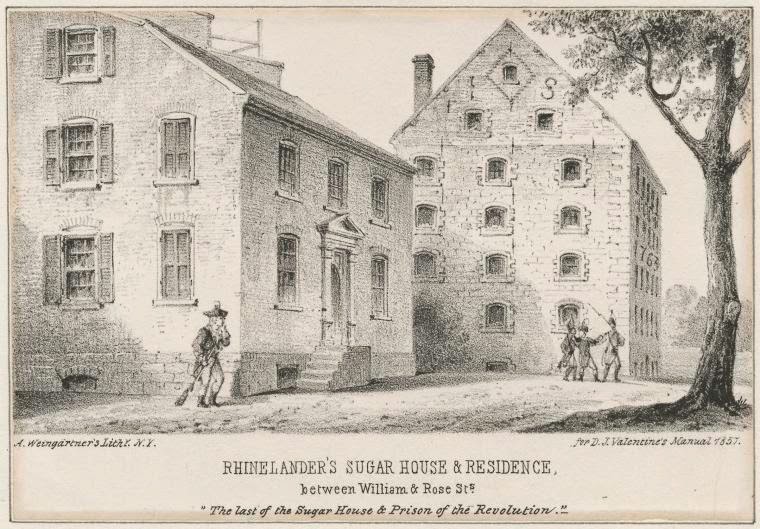 Trinity Church in 1889, the final year that it was the tallest permanent structure in New York City. (NYPL) 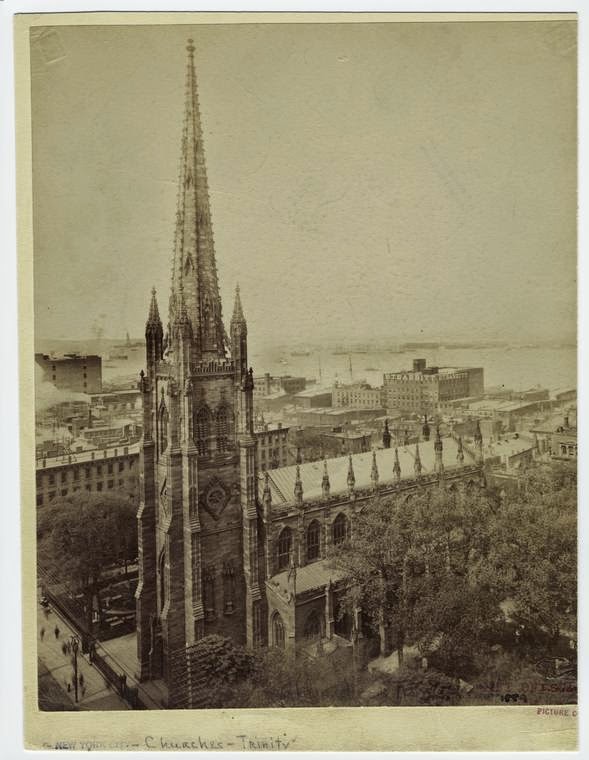 Trinity would be unparalleled in the New York skyline by any permanent buildings for almost 46 years.  But the Latting Observatory at the Crystal Palace Exhibition for a short time allowed New Yorkers the highest vantage on the island. 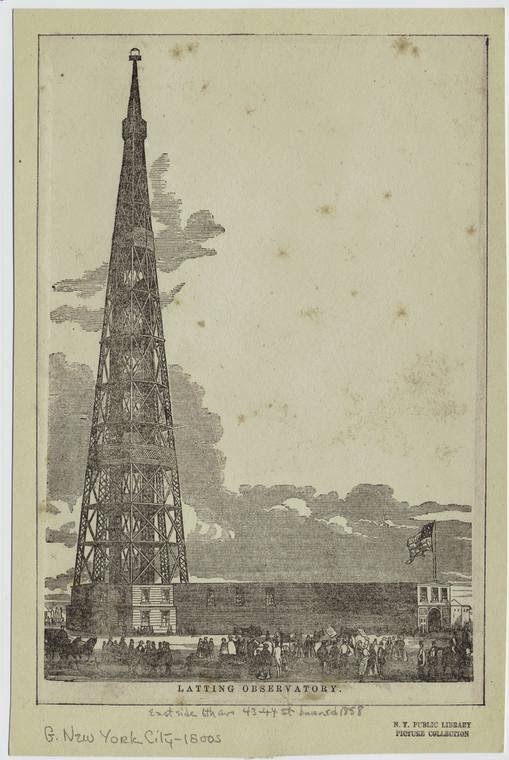 Joseph Pulitzer’s New York World Building, in context with its surroundings, including its proximity to the Brooklyn Bridge. This location would be its undoing, as the building was demolished later to make way for an automobile ramp. (Courtesy Rotograph Project) 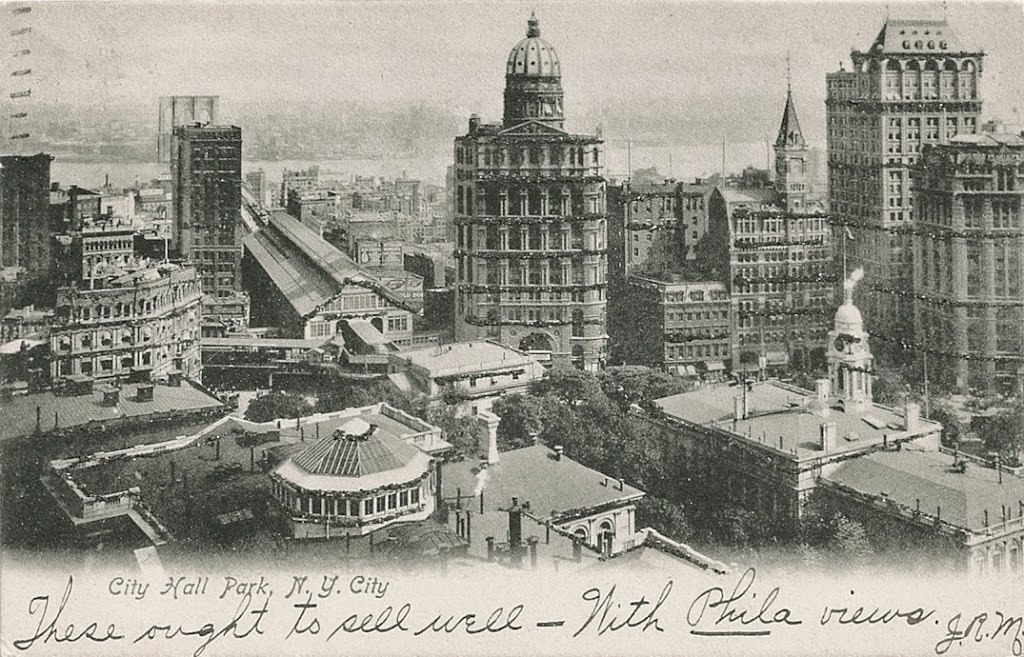 The Manhattan Life Insurance Building became a new neighbor for Trinity Church in 1894.  Its lantern top served as a lighthouse and an office for the New York Weather Bureau. (NYPL) 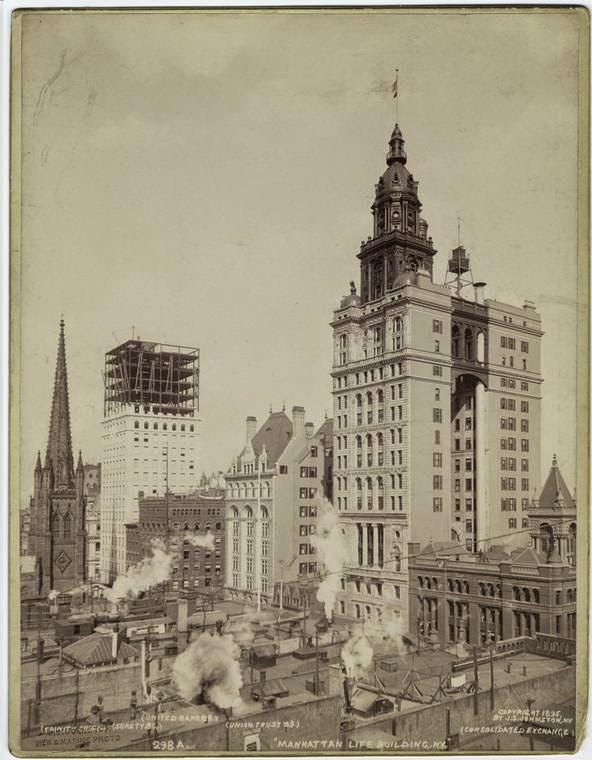 The Park Row Building, the original ‘twin towers’ of lower Manhattan, was criticized for its two-dimensional design but it’s managed to survive into modern times.  It used to host J&R Music World on its ground floor until that business closed last year. 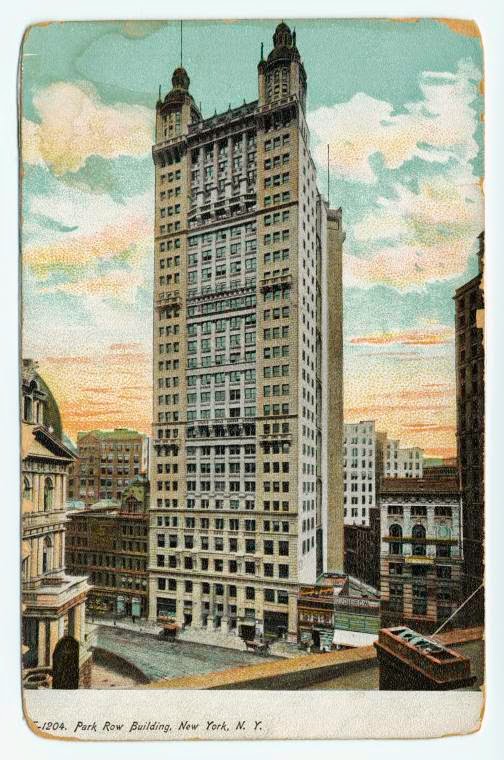 The extraordinarily unusual headquarters for the Singer Sewing Machine Company.  The Singer Building has the rare distinction of being the tallest building every purposefully torn down when it was demolished in the 1960s. 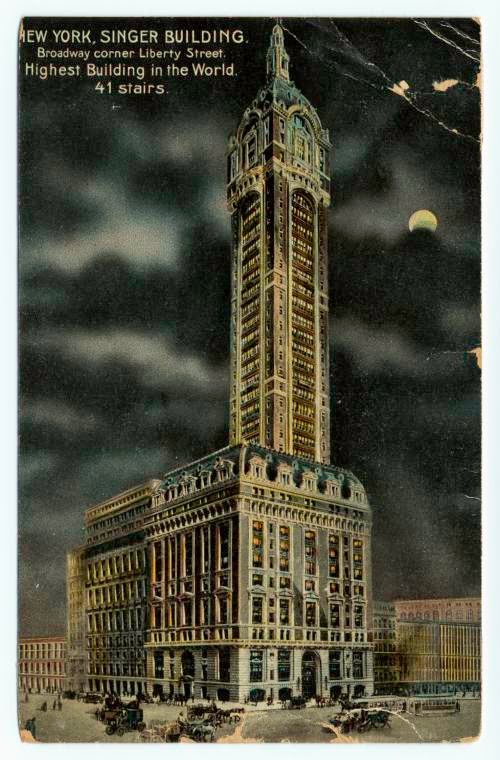 Madison Square was already graced with both the Flatiron Building (below) and Madison Square Garden when it finally got its tallest skyscraper….. (NYPL) 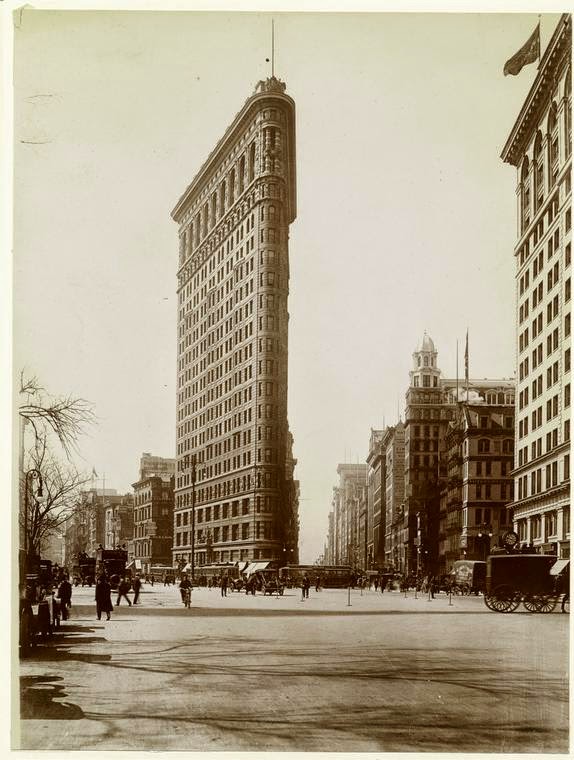 …the Metropolitan Life Insurance Tower, pictured here with an early airplane above it, in a postcard produced by Underwood & Underwood. (NYPL) 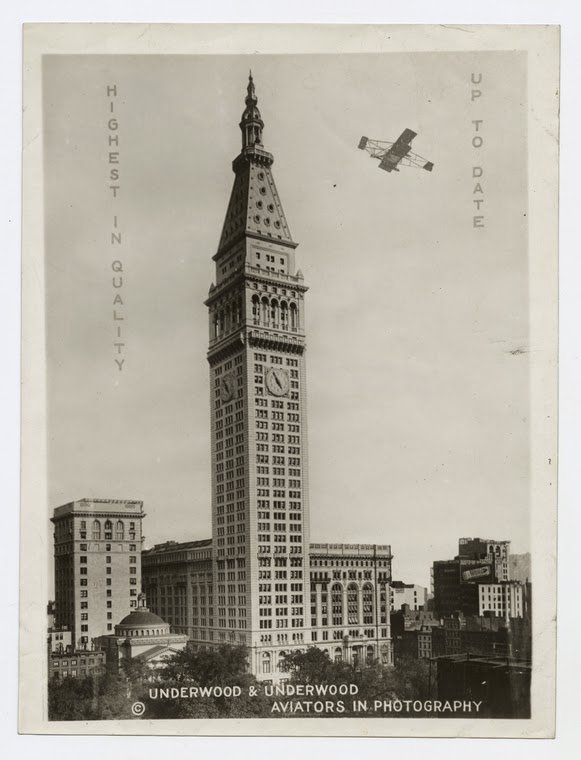 The Woolworth Building (featured here on a cigarette card) is one of the greatest extant examples of pre-zoning law construction with no setbacks along the front side. 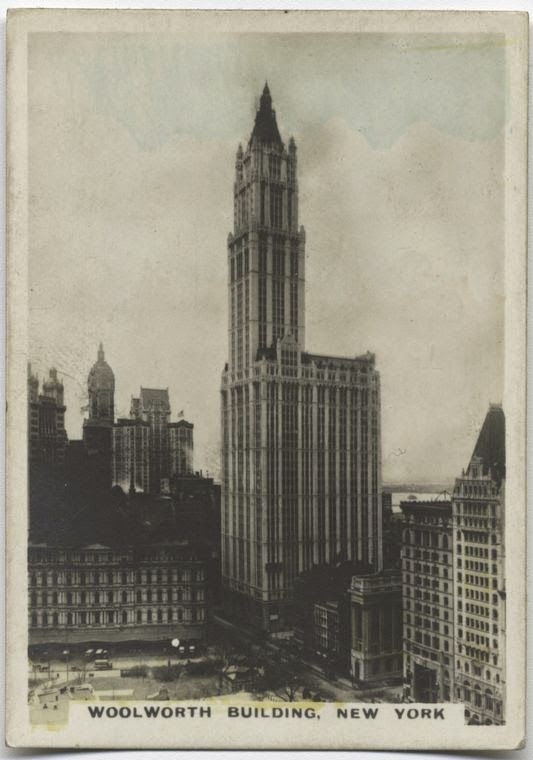 The Manhattan Company Building (or 40 Wall Street) sat among a host of other skyscrapers and was only briefly the city’s tallest building until Walter Chrysler and William Van Alen debuted their surprise uptown. 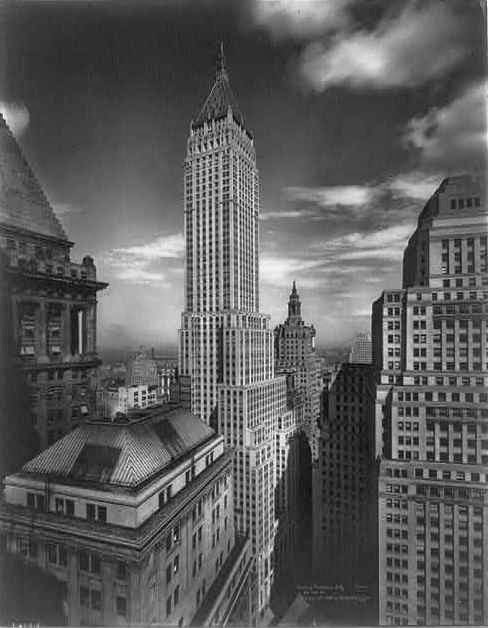 The Chrysler Building in 1930 with its spire freshly attached to the top, making it (for a little over a year) the tallest building in the world. 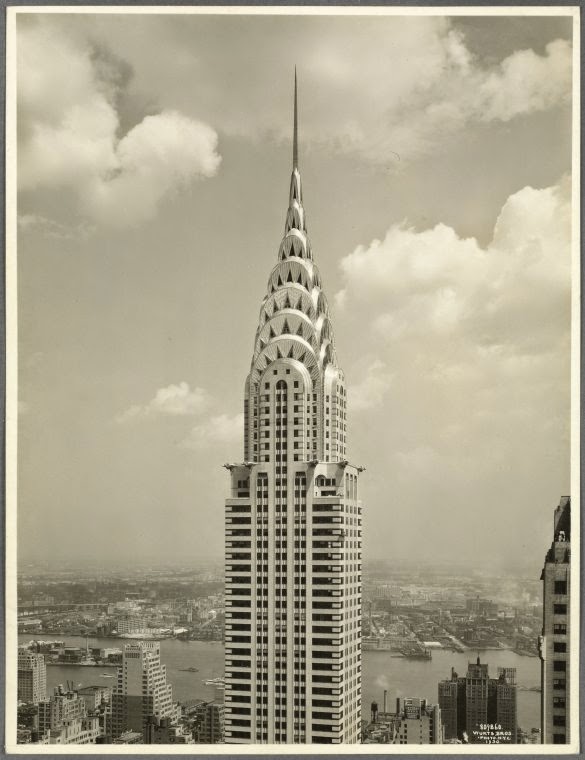 The Empire State Building became the tallest building — and the defining symbol of New York City — thanks to a determined executive from General Motors and Al Smith, the former governor of New York. 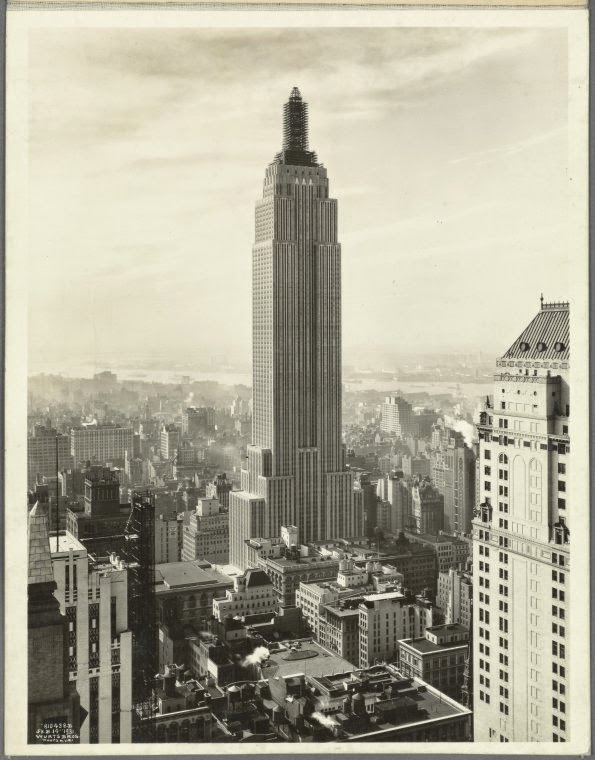 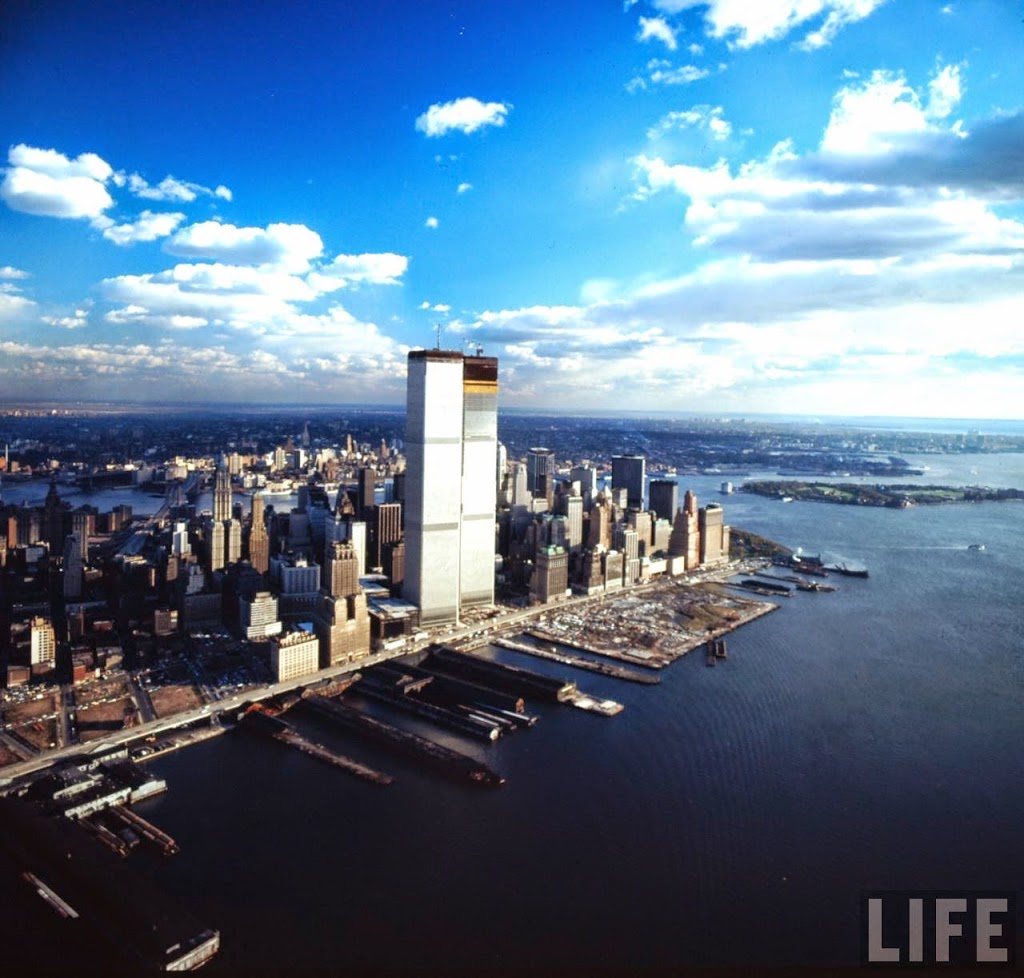 4 replies on “The Tallest Building In New York: A Short History”

What a treasure trove this is!

I just gotta say how much I love this site and your podcasts. Really, the best.