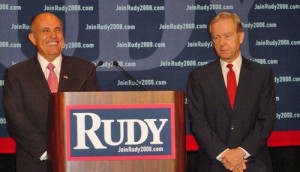 Yesterday was the opening of Campaigning For President at the Museum of the City of New York, a look at the city’s participation in some of the most famous and contentious presidential elections in history. The exhibit will focus on the city’s role in deciding the outcomes, as well as some of the famous New Yorkers who once coveted the White House.

It got me thinking about the recent phantom campaign of Michael Bloomberg and colossally failed one of former mayor Rudy Giuliani. Is it possible for the leader of the biggest city in America to step up to the role of Commander In Chief?

The answer is a big, fat NO, at least so far. Not one New York mayor who ever actively tried or hinted at being interested in the job ever got it. And the list of also-rans is long indeed:

Rudy Giuliani — He did run for President in 2008 but stumbled almost immediately afterÂ a major Florida miscalculation and never recovered, withdrawing on January 30, 2008. 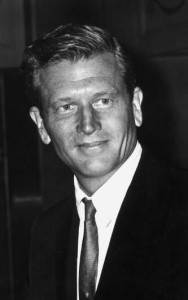 John Lindsay (mayor from 1966 to 1973, pictured at right) didn’t fare much better than Rudy in the quest for the 1972 Democratic nomination. Starting out of the gate strong, like Rudy he stalled in Florida and eventually dropped out. Given the catastrophic changes to the city in the 1970s, I’m surprised anybody thought having ‘mayor of New York’ on their political resume would have garnered national favor.

Robert F. Wagner (1954 to 1965) never ran for president but was short-listed to be Adlai Stevenson’s vice president in 1956. Wagner was eventuallyÂ beaten in balloting by Al Gore Sr. and John F Kennedy Jr. But, in the end, they were ALL beat for the spot by the clearly more popular, always reliable Estes Kefauver.)

Below: Robert Wagner meets Fidel Castro during his visit to New York in 1959.

William Jay Gaynor (mayor 1910-1913) was widely considered a potential presidential hopeful, even with an assassin’s bullet lodged in his neck. Had he actually lived through his term as mayor, who knows?

George Brinton McClellan Jr (mayor 1904-1909) was never a presidential candidate but his father and Civil War icon George B. McClellan Sr certainly was. Dad ran in 1864 against Lincoln in his second term, promising to end the war in the South. 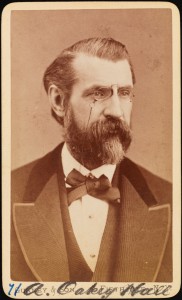 A Oakley Hall (mayor 1869 from 1872) (pictured at left) was as closely tied to the Boss Tweed Ring as a politico could be, but even he harbored presidential hopes. Considering he had to temporarily resign from mayor due to the Tweed scandal, I can’t imagine how much luck he would have had.

DeWitt Clinton (mayor for ten non-consecutive annual terms starting in 1803 ending 1815) collected political positions like butterflies, but the one he could never catch was the presidency, defeated by incumbent James Madison in 1812. By June, Madison had declared war on England and later fled the White House when the Brits torched it.

The closest a mayor ever got to the top job was Edward Livingston, who became Secretary of State to Andrew Jackson. Which is interesting, as Livingston was literally ran out of Manhattan after his stint as mayor several years previous due to debts and scandals.

Heck, even those governors who failed to become president did so in a dramatic and historic fashion, such as former governors Al Smith, Samuel Tilden and Thomas Dewey (of the particularly famous photo below). 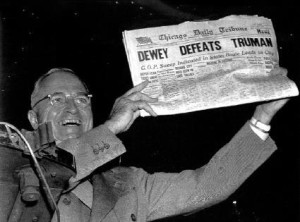