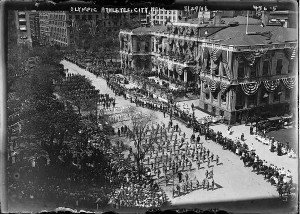 Crowds gather around the steps of New York City Hall to welcome the procession of American Olympic athletes returning from the 1908 games in London. Pictures courtesy Library of Congress.


OLYMPICS ROUNDUP London has hosted the Olympics four times, New York City zero.  The city tried for the current games in an ultimately unsuccessful bid back in 2005. A great many New Yorkers are quite happy to be without an international sporting event in the city. Personally, I would have loved to have seen New York become even more international for a few weeks, although I’m relieved that plans for that monstrous Olympic Village in Queens were never realized.

Outside of that, the closest the city has ever gotten to the Olympics is a little under 300 miles — the distance from New York to Lake Placid, which hosted the 1980 Winter Olympics. Those games featured the now-storied ‘Miracle on Ice‘ match between the USA and the USSR. But did you know that the Russian team completely iced the US team just a few days earlier in an exhibition game played at Madison Square Garden? You can read more about that in my article ‘No Miracle on Ice’ from February 2010.

Although we’ve never hosted the Games, when it comes to events before and after the Olympics, New York City’s all over them. Randall’s Island has hosted several Olympic trials, including one of the most famous at all, the track and field events from 1936 which produced sports legend Jesse Owens. You can hear all about it in my 2008 podcast on the history of Randall’s Island and the 1936 Olympic Trials. [Here’s the blog post or you can download it directly from here.]

Around the same time, Robert Moses commissioned Astoria Pool with the explicit purpose of hosting Olympic swimming trials. That 1936 event, featuring its dramatic diving platform, produced several American gold medalists. You can read more about Astoria Pool in an article from just a few months ago — Nostalgia for Astoria Pool.

Of course, a great many New Yorkers were entirely unhappy with any participation in the 1936 Olympic Games, given that they were being held that year in Berlin, in the heart of Nazi Germany. A concerted effort by politicians (including Fiorello LaGuardia), religious leaders and athletes to boycott the games was met with defeat, but in the summer of 1936, a group of Jewish athletes competed in a ‘counter-Olympics’. For more information, check out the blog post Boycott the Olympic Games!

And finally, here are some pictures of the 1908 Olympic athletes reception ceremonies, held in New York on the team’s return in August from London’s very first Olympic Games.. 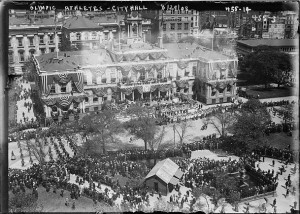 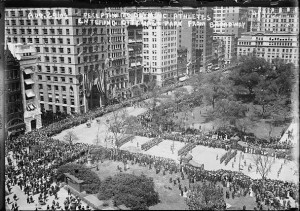 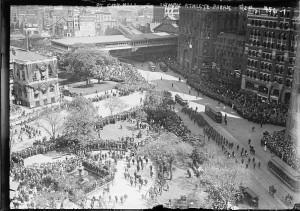 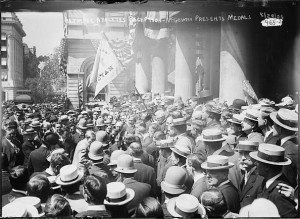 And finally, here’s a swell photograph — no other adjective to describe it — of the U.S. Olympic team from 1908, posing with President Theodore Roosevelt a week after the New York festivities. Is it just me or does it look like half the team is comprised of middle-aged bankers?

The most successful American at the 1908 games was New Jersey track-and-field dynamo Mel Sheppard, pictured below as he crossed the finish line for a gold medal in the 1500-meter. Take note of the man in the top hat on the side of the track. 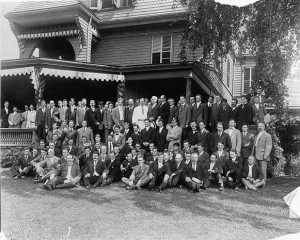 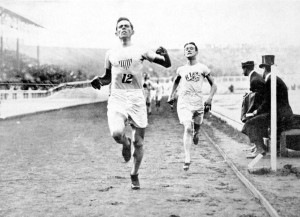 HI. Thanks for this. There is a really interesting documentary on Jesse Owens from PBS’s American Experience http://www.pbs.org/wgbh/americanexperience/films/owens/ It talks about the controversy of Berlin hosting the events. Really great and fascinating documentary.