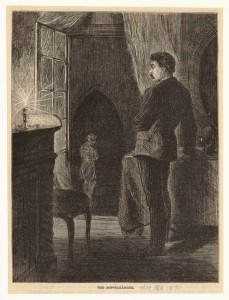 Above: The DoppelgÃ¤nger, a creepy wood engraving from Harper’s Magazine, 1871 (Courtesy NYPL)

Catch up on the tradition by listening in to our last six ghost story shows. You can listen at the links below, download them from iTunes or find them anywhere you listen to podcasts:

Spooky Stories of New York (2008) [download] [iTunes]
The drunken spirits of the Algonquin, the mysteries of a hidden well in SoHo, the fires of the Witch of Staten Island, and ‘the most haunted brownstone in New York’. [original blog post]

Haunted Tales of New York (2009) [download] [iTunes]
The secrets of the restless spinster of the Merchants House, the jovial fright of the Gay Street Phantom, the legend of the devil at Spuyten Duyvil Creek, and the spirit of a dead folk singer. [original blog post]

Supernatural Stories of New York (2010) [download] [iTunes]
The scary revelations of a New York medium, married Midtown ghosts who fight beyond the grave, a horrific haunting at a 14th Street boardinghouse, and the creepy tale of New York’s Hart Island. [original blog post]

Haunted Histories of New York (2011) [download] [iTunes]
What’s horrors are buried at the foot of the Statue of Liberty? What’s below a Brooklyn Catholic church that makes it so dreadfully haunted? What ghost performs above the heads of theatergoers at The Palace? And what is it about the Kreischer Mansion that makes it Staten Island’s most haunted home? [original blog post]

Mysteries and Magicians of New York (2012) [download] [iTunes]
Grab a drink at the Ear Inn, one of New York’s most historically interesting bars, and you might meet Mickey, the drunken sailor-ghost.  A frightening story of secret love at old Melrose Hall conjures up one of Brooklyn’s most popular ghostly legends.  A woman is possessed through a Ouija board, but while she accept the challenge by one of New York’s first ghostbusters?  And a tale of Harry Houdini, Sir Arthur Conan Doyle, and the line between the supernatural and mere sleight of hand. [original blog post]