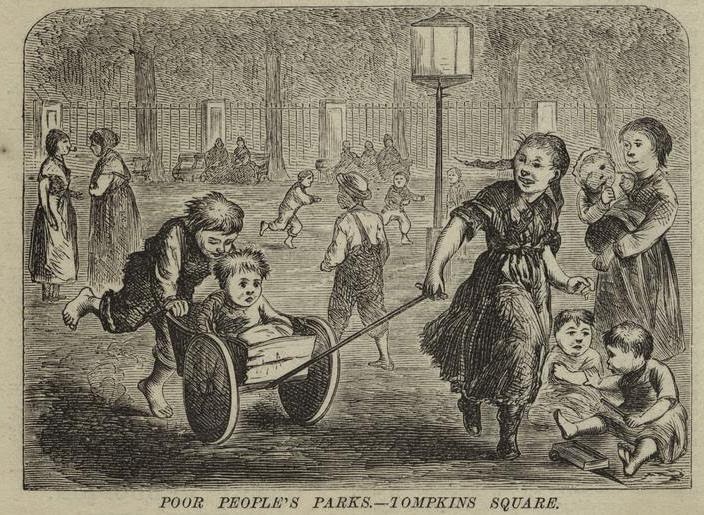 A condescending illustration of Tompkins Square Park from the New York journal Hearth and Home, 1873. (NYPL)

Central Park has frequently been called ‘the people’s park,” but we think Tompkins Square Park may have a better claim to that title.  From its inception, this East Village recreational spot — named for Vice President Daniel D Tompkins — has catered to those who might not have felt welcome in other New York parks. 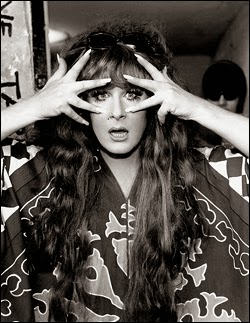 Carved from the marshy area of Peter Stuyvesant‘s old farm, Tompkins Square immediately reflected the personality of German immigrants who moved here, calling it Der Weisse Garten.  With large immigrants groups came rallies and demands for improved working conditions, leading to more than a number of altercations with the police in the 19th century.

Progressives introduced playgrounds here, and Robert Moses changed the very shape of Tompkins Square.  But the most radical transformation here took place starting in the late 1950s, with the introduction of ‘hippie’ culture and infusion of youth and music.

By the 1980s, the park became known not only for embodying the spirit of the East Village through punk music and drag shows (above: Lady Bunny), but also as a haven for the homeless.  Clashes with police echoed the clashes that happened here one century before.  The park still maintains a curfew left over from the strife of the late 1980s.

And we would like to again thank our new sponsor Squarespace!

It’s doubtful that the image below is accurately depicted by the caption which accompanied it in Frank Leslie’s Illustrated Newspaper in 1874: “The red flag in New York – riotous Communist workingmen driven from Tompkins Square by the mounted police, Tuesday, January 13th.” [Courtesy LOC] 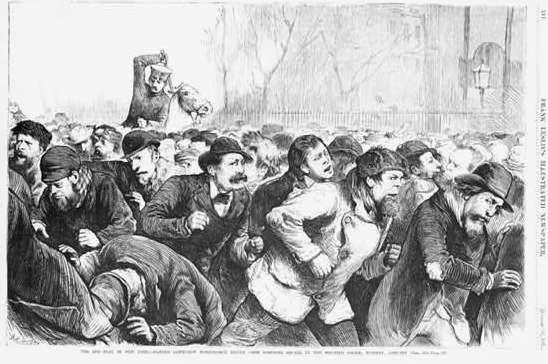 Another illustration of the 1874 protests, notably featuring a German establishment in the background. (More information on the Tenement Museum blog.) 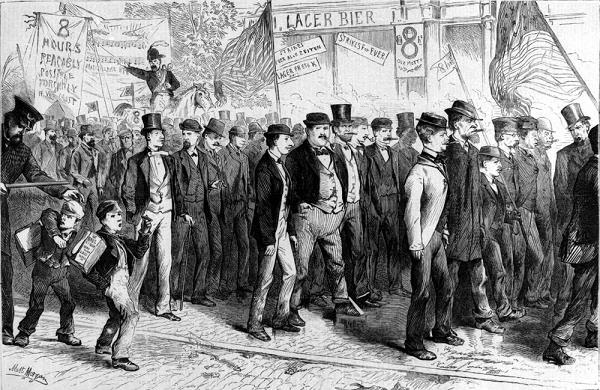 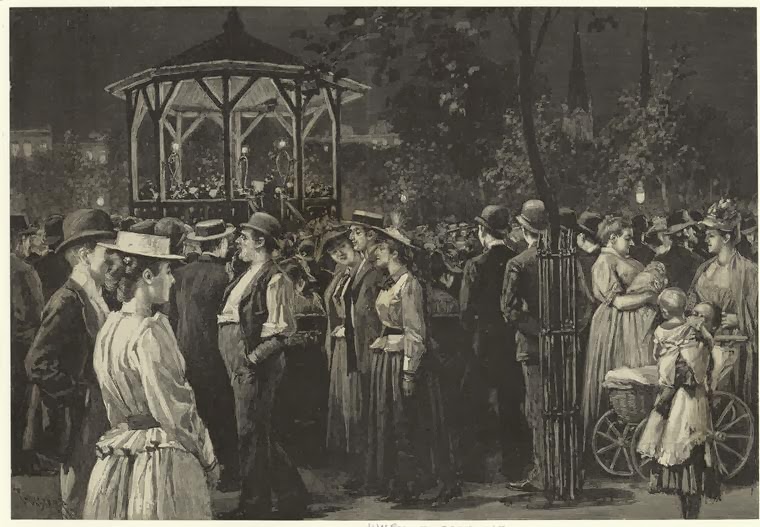 Women and children enjoying themselves in Tompkins Square Park, Arbor Day, 1904, on the brand new playground for girls. (Photos courtesy Museum of the City of New York) 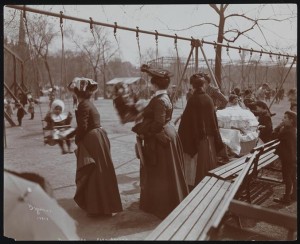 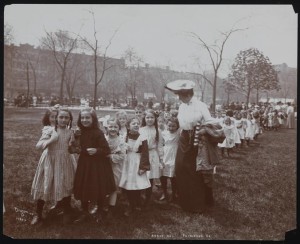 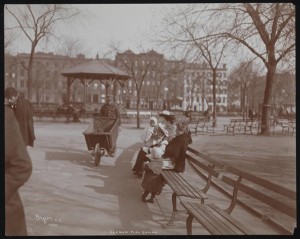 The Tompkins Square Milk House, which provided clean, healthy milk to families in the 1910s. 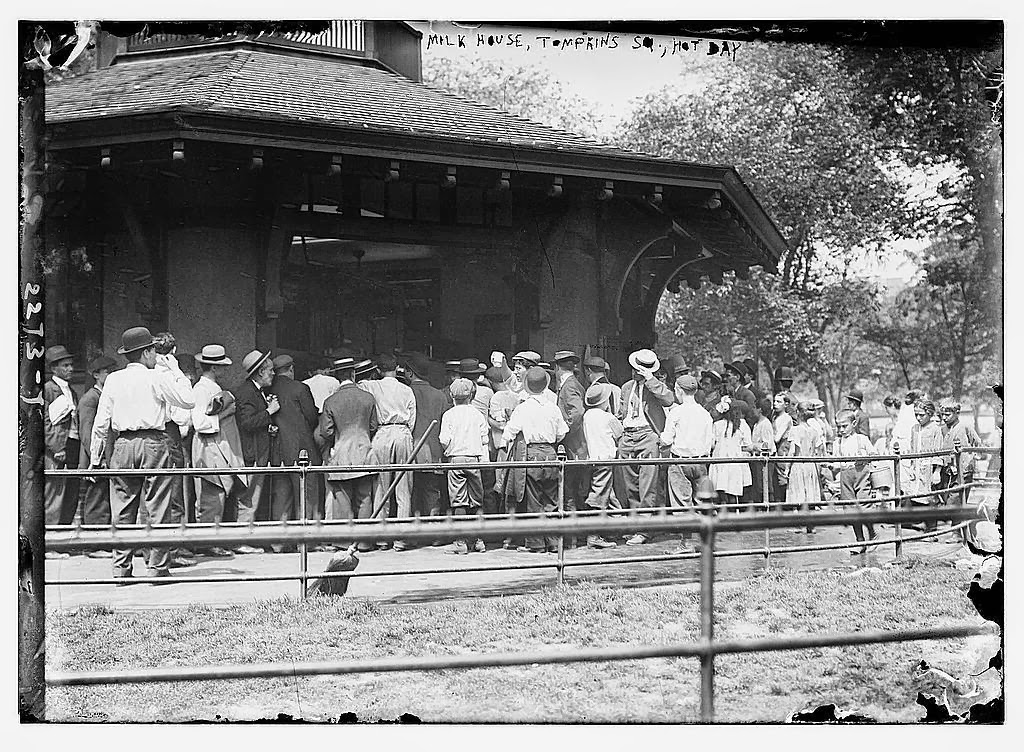 The statue of Samuel Cox, funded by New York postal workers. (1900, pic courtesy Museum of the City of New York 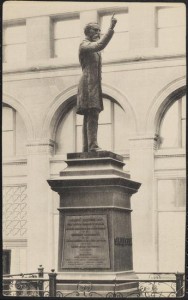 Children waiting in line to use the children’s reading room at the Tompkins Square branch library. (NYPL) 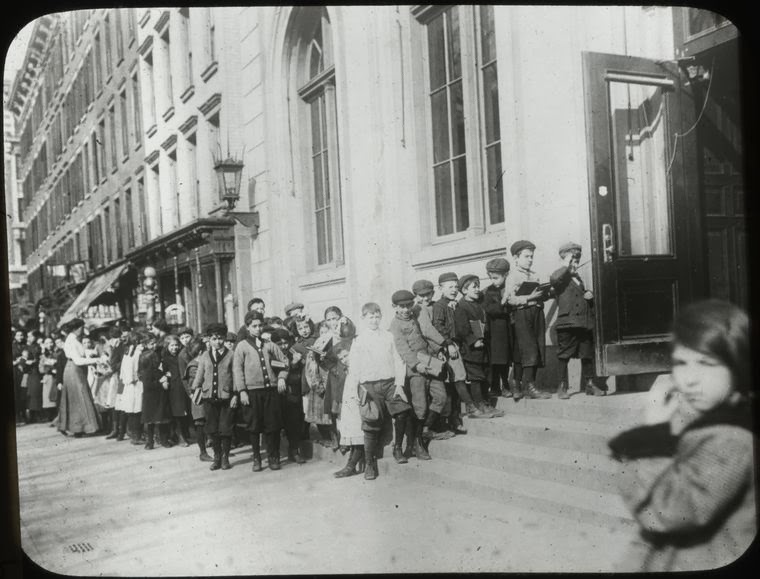 An advertisement from 1920, urging residents of the Lower East Side to take English courses at the Tompkins Square branch library. There are several of these posters in different languages here. (NYPL) 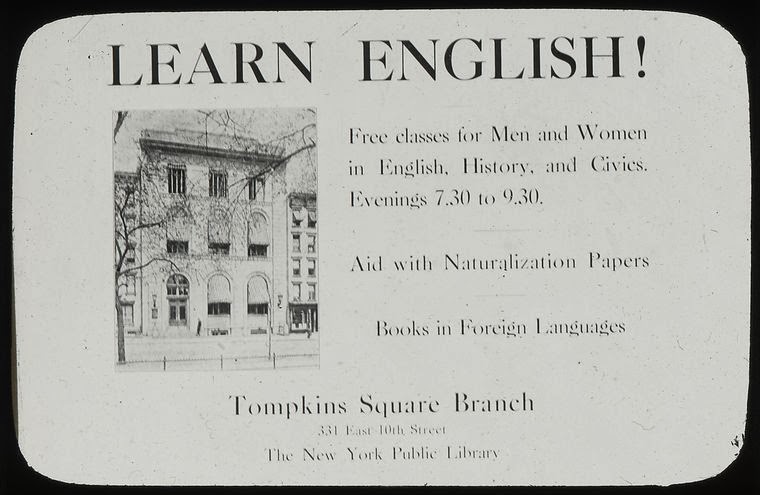 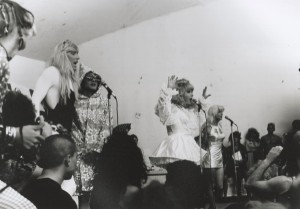 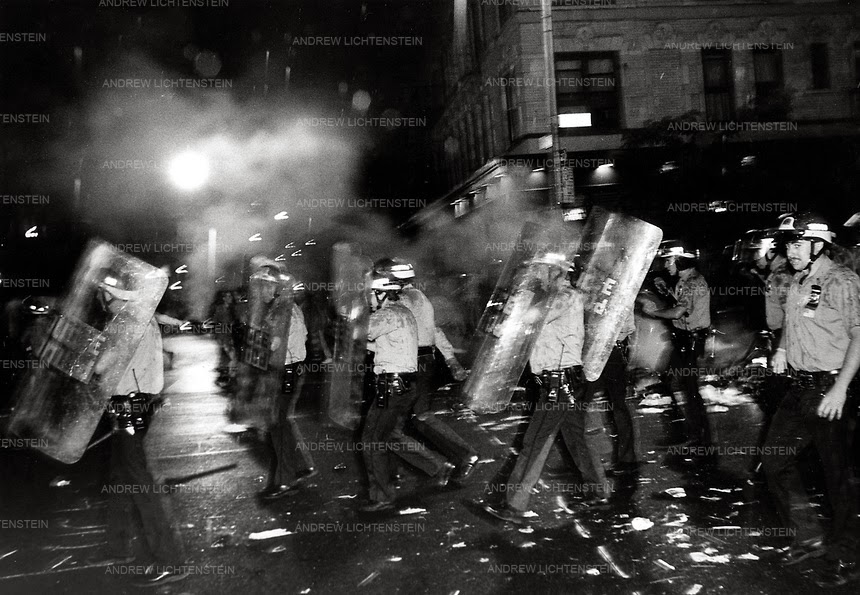 The Tompkins Square Park bandshell, which was torn down by the city in 1991.  (Photo courtesy Flickr/Mike Evans) 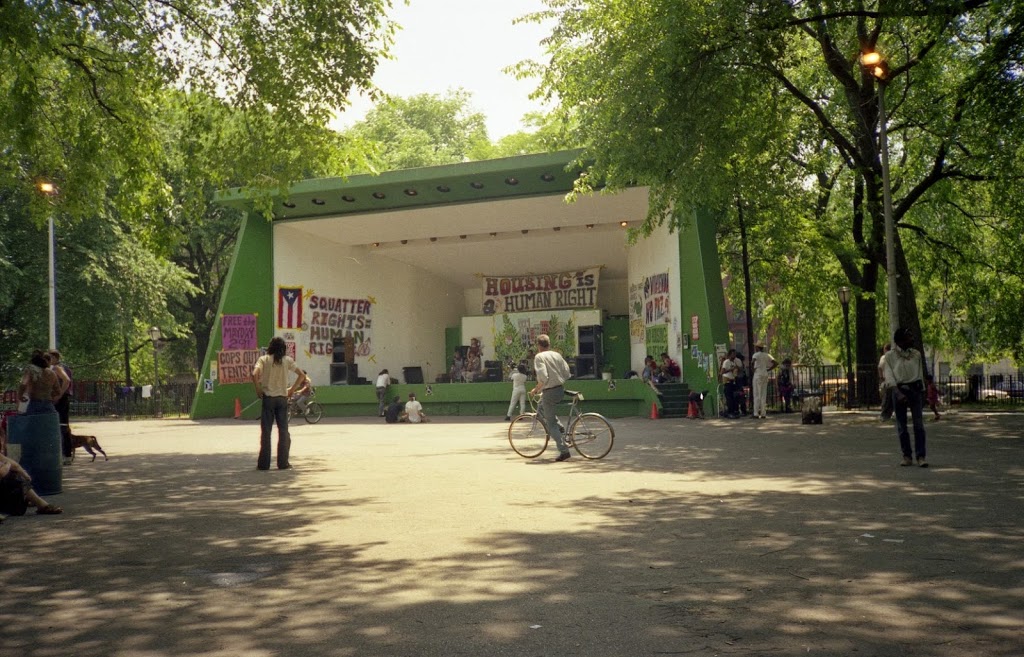 A compilation video of dancing and general cavorting in Tompkins Square Park at a concert event in August 1981, with appropriate musical accompaniment.  The footage originally ran on public access television.

An investigative news piece (Cult of Rage!) from 1988 about the 1988 Tompkins Square Riot.

Video of A. C. Bhaktivedanta Swami Srila Prabhupada and his followrs in Tompkins Square Park by the Hare Krishna tree. 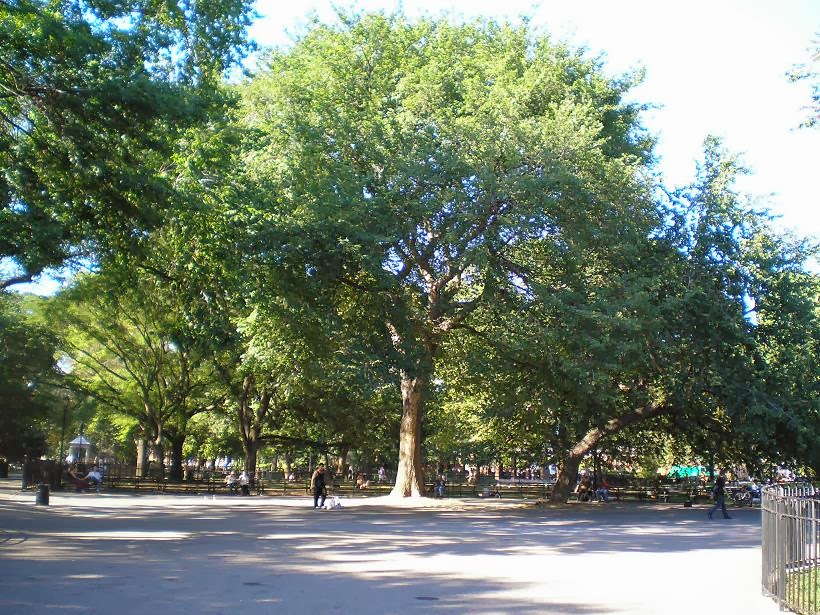 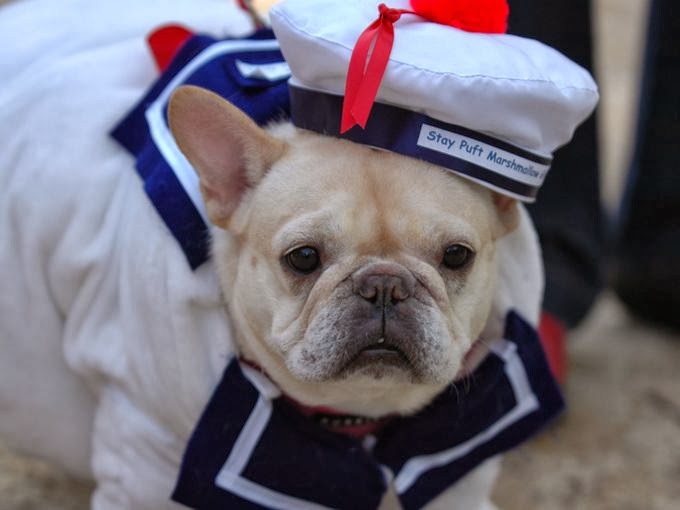 6 replies on “The ragged, rebellious history of Tompkins Square Park”

“late 1950s, with the introduction of ‘hippie’ culture and infusion of youth and music”

I don’t recall concerts there prior to the summer of 1967.

Fun Fact:
The Grateful Dead’s first East Coast concert was in TSP on June 1, 1967. It was free. In later years, Dead concert’s drew thousands. This only drew about 100 or 150. I have photos of it, with Pigpen on organ in fact.

Country Joe & the Fish also played there about the same time.

You are correct!!! I was going to also respond to this. I lived on St Marks Place 1949-1972. The hippies began moving in from the West Village in the mid 60’s, because the rents were more affordable. Prior to the mid 60’s the area was referred to as The Lower East Side.

And Blues Traveler wrote a song about it called Closing Down The Park.

Two comments about the photos:

–the photo of the statue of Samuel S. Cox must have been taken while the statue was still in Stuyvesant Park. It was later moved to 7th Street and Avenue A in TSP.

The negative is definitely flipped!

I was a runnaway kid fm Brooklyn. I was at many concerts during 67, 68, 69.I didnt go see the bands cuz I knew who they were. I just went cuz I was living in the hood & heard about the fun. The Dead, the Fish, all the bands I heard were mindblowing. I was also glued to the Fillmore & the Circus. Best years of my life. R.I.P. East Village of the sixties