PODCAST The Lower East Side is one of the most important neighborhoods in America with a rich history as dense as its former living quarters. Thousands of immigrants experienced American life on these many crowded streets. In this podcast, we look at this extraordinary cultural phenomenon through the lens of one of those — Orchard Street.

Its name traces itself to a literal orchard, owned by James De Lancey, a wealthy landowner and Loyalist during the Revolutionary War. By the 1840s the former orchard and farm was divided up into lots, and a brand new form of housing — the tenement — served new Irish and German communities who had just arrived in the United States.

A few decades later those residents were replaced by Russian and Eastern European newcomers, brought to the neighborhood due to its affordability and its established Jewish character.

Living conditions were poor and most tenement apartment doubled as workspaces. Meanwhile, in the streets, tight conditions required a unique retail solution — the push cart, a form of independent enterprise that has given us some businesses that still thrive on Orchard Street today.

You can see this century-old life along Orchard Street today, if you know where to look. Luckily that’s what we’re here for! With some help from Adam Steinberg at the Tenement Museum, where the best place to interact with a preserved view of the old days.

Below: “Imported Americans” — from a photo card, courtesy Library of Congress

A look at the property of James De Lancey and his sophisticated plans to turn his farm into a wealthy neighborhood, probably in the spirit of St. John’s Park. The blog Manhattan Unlocked goes really deep into the story of De Lancey’s land holdings here. 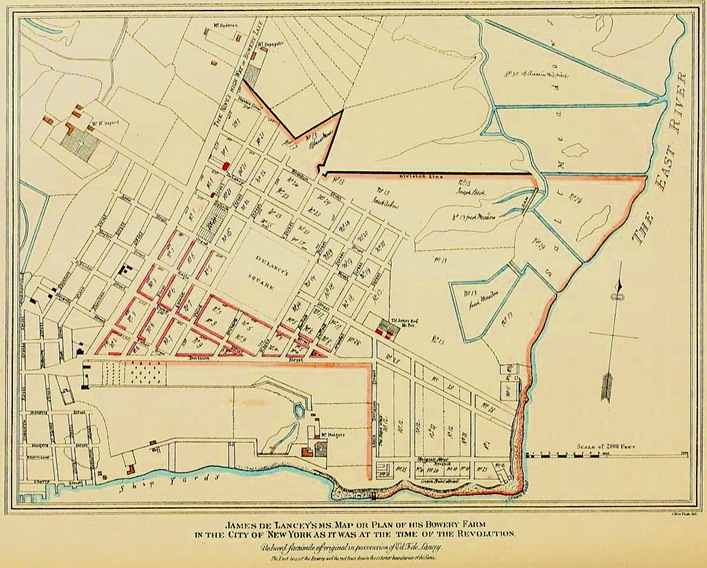 I’m not sure where this picture was taken but it illustrates a cluster of buildings constructed before the advent of tenement construction. 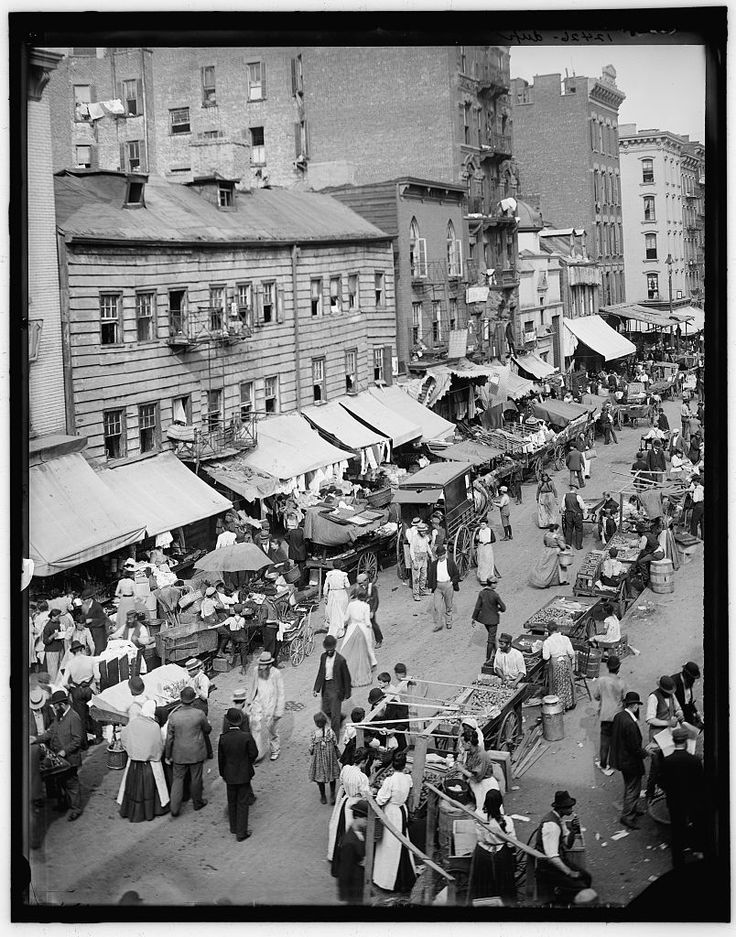 Here’s a selection of photographs from the archives of the Museum of the City of New York, illustrating the clogged streets of Orchard and Hester Streets, busy with the commerce of the day. All of these are from 1898. 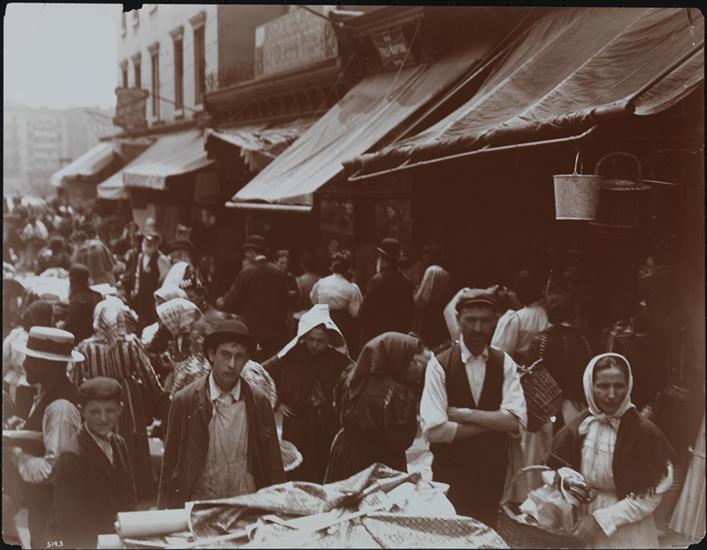 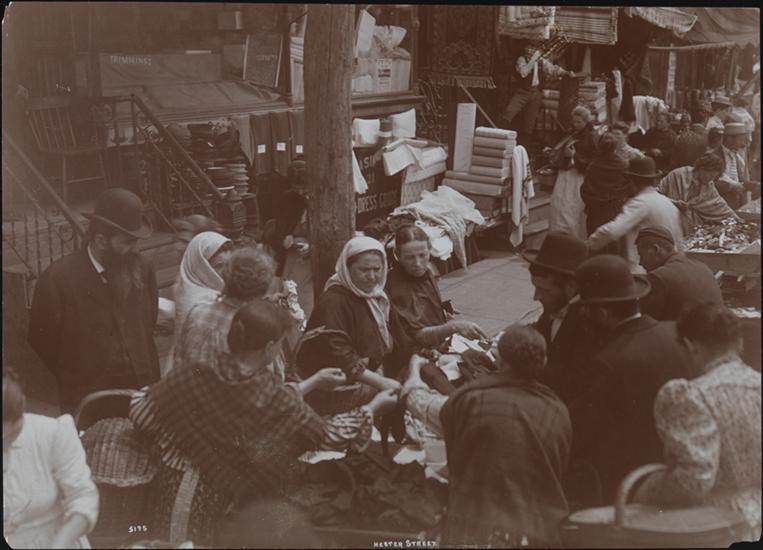 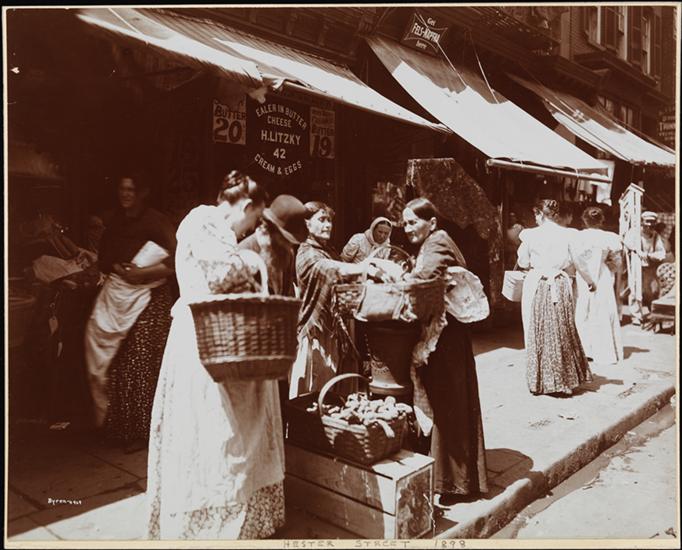 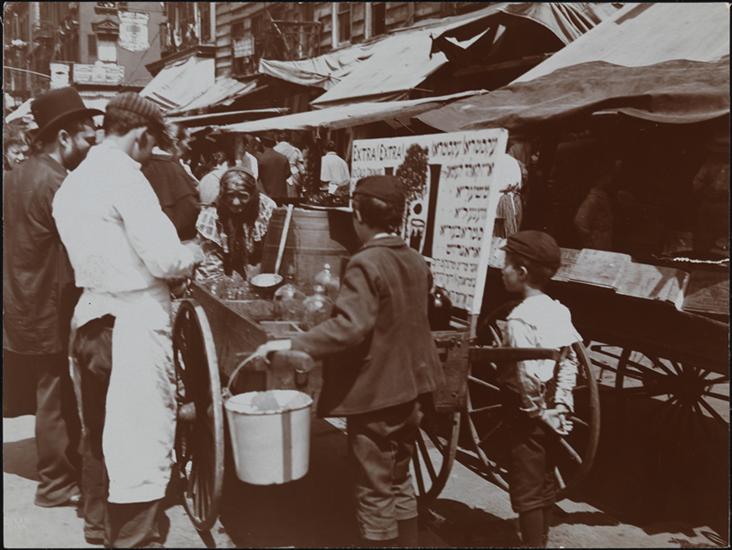 The home sweatshops, cramming an industry and several people into the parlor of a tenement building. Here’s a necktie ‘factory’ on Division Street in 1890.

And another from 1911. Child labor in full view! 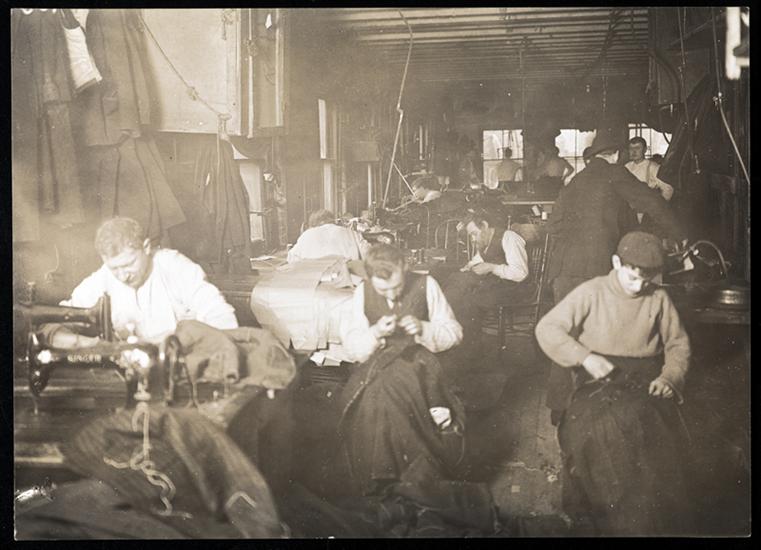 Ridley’s Department Store on the corner of Grand and Orchard Streets. They’ve really cleaned up the streets in this advertisement, haven’t they?

Here’s what all that mess on Orchard Street looks like in the winter! Pictured here in 1926.

This photo was taken in 1908 (or somewhere around that date) showing a bit of the expansion of Delancey Street. Workers labor in the street while a Jewish boy looks on. (Department of Records) 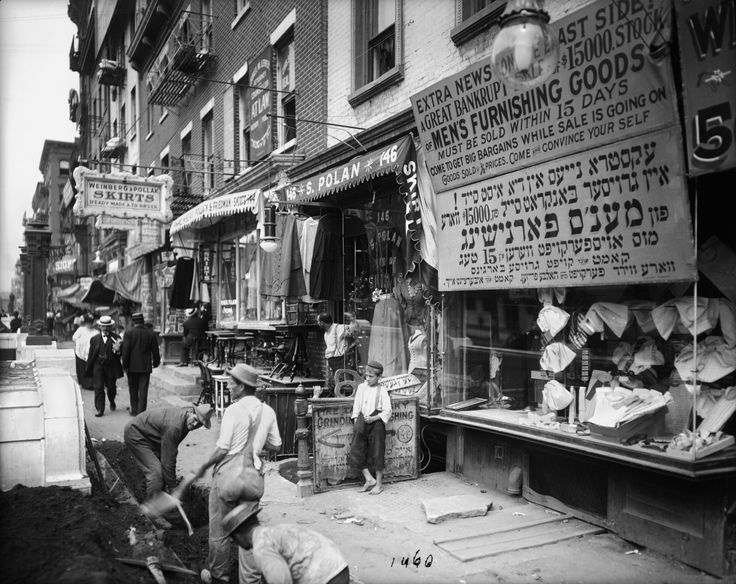 An overhead view of the intersection of East Broadway, Essex Street, Division Street and Canal Street, showing Seward Park and the library, both built to provide air and education to the Lower East Side. Photo is from 1928. [source] 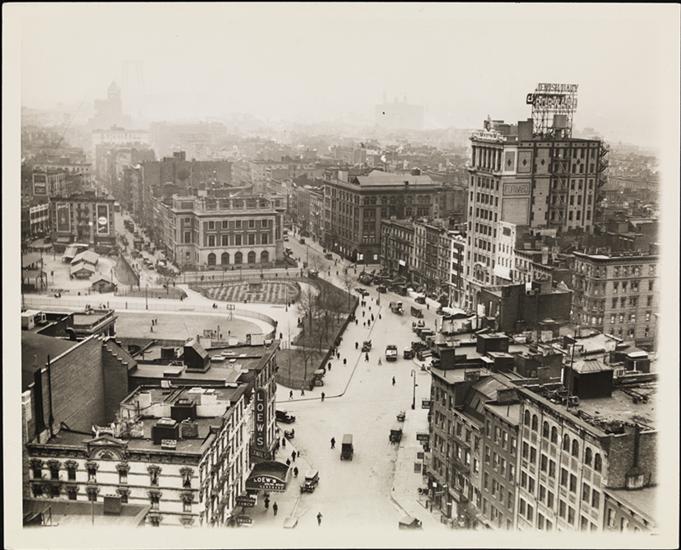 An extraordinary view of Delancey Street in 1904 during the widening process for access to the Wililamsburg Bridge.

And here’s what Delancey looked like in 1928. This is from the top of a hotel from Delancey and Chrystie. You can see the elevated train that went down Allen Street. Orchard Street is the next block in the distance. Allen Street too was subject to expansion. And see the building labeled Bank of the United States? Here’s a little bit more about its fascinating history. 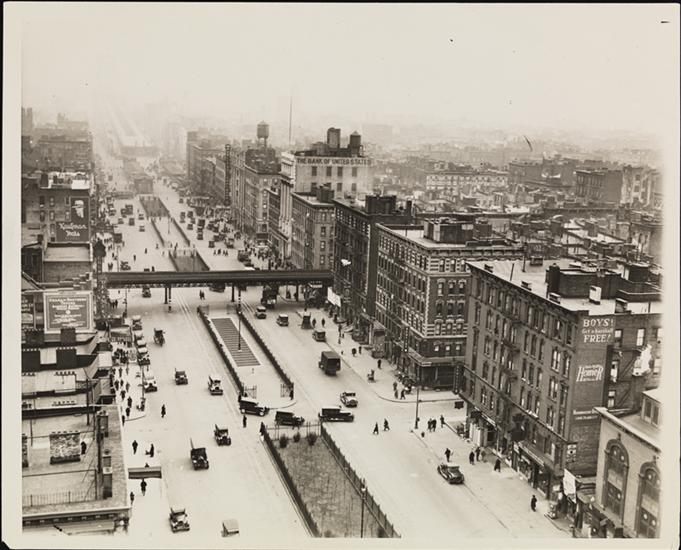 Hyman Moscot stands outside of his shop at 94 Rivington Street sometime in 1934. He began his business selling eyeglasses out of a pushcart.

A men’s tie peddler has some success selling his ties on the street corner at Orchard Street and Delancey. Courtesy New York Public Library. Click here for more historic views of this corner.

The Lower East Side in the 1930s — less crowded in the streets with very active storefronts.

Jarmulowsky’s Bank at Orchard and Canal. The perch at top is no longer on the building. It was originally built there because Sender Jarmulowsky wanted to have the tallest building in the Lower East Side. 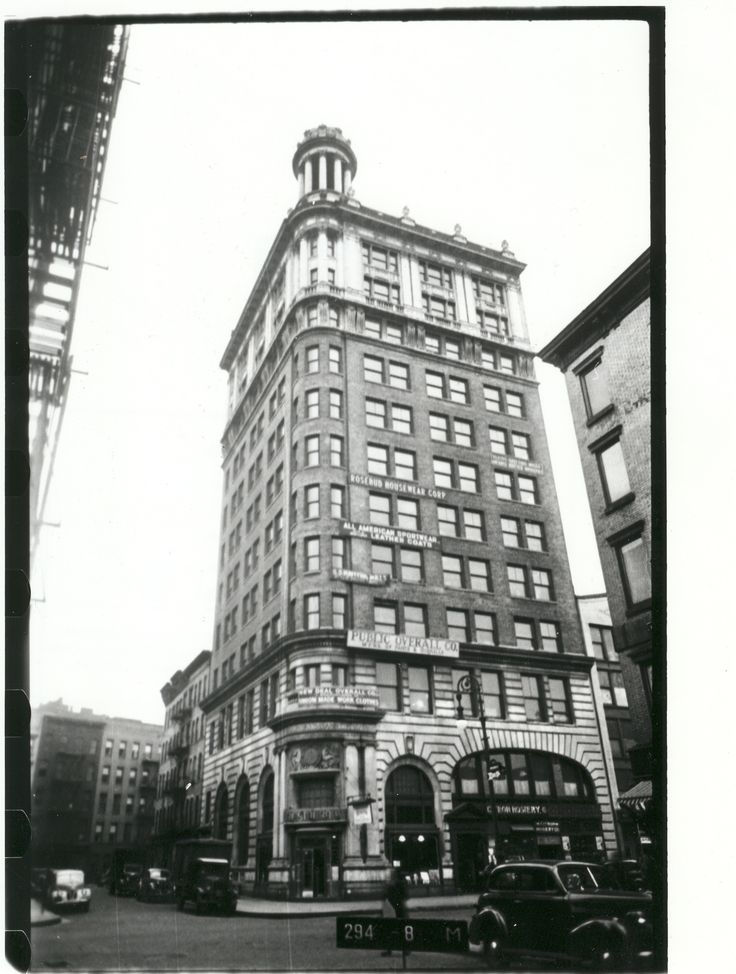 The interior of 97 Orchard Street (today’s Tenement Museum) in 1988.

A big thanks to Adam Steinberg at the Tenement Museum! Visit their website for more information.

Those were amazing photos! i can not imagine the smell and dirt from that era and how hard those folks had to work for pennies. Excellent photo essay.

The women would fry food with chicken fat skimmed and cooled from the top of chicken broth.

Why don’t you show where Schmulka Bernstein’s had there factory on Rivington st, Also where Bernstein-on-ESSEX st who was the originator of kosher Chinese food? If u would like to know more about the LES please let me know. Thank You. Irwin Bernstein

…and let’s not forget Ratners, the Apollo movie theater, the chicken market under the Williamsburg bridge and the Educational Alliance! So much history!

Hi Irwin,
Did you live on the LES? What was the Schmulka Bernstein factory?
Thanks,
Louise

Pardon me:
But who wants to know where kosher Chinese food was!

The timing of this podcast was fortuitous as a friend and I visited the Tenement Museum on Saturday. What a great introduction for our tour. If you have an interest in immigration, I recommend adding the museum to your itinerary for your next visit to New York City.

Great photos & fascinating! My father was born at 164 Orchard St. In 1904/05. My grandparents lived there until about 1913. Wish I could find out more information, especially about my grandfather’s business he had making underwear. Is there a way to look up businesses back then?

There are New York City phone directories that you can look up your grandfather’s name and sometimes it has the business name, since most people did not have phones in their homes. Also, if you can look up the WWI registration, it often has the name and address of where the person worked. All great info in trying to unravel the puzzle!