Yesterday I went searching for remnants of the old Cherry Hill neighborhood. There are none, as far as I could tell.

It’s not the first New York City neighborhood to entirely vanish in the rush of progress — is it, Robert Moses ? — however it may be the one that began with the most impressive pedigree.

Cherry and Catherine streets, looking towards the Manhattan Bridge anchorage, in the once glorious Cherry Hill neighborhood. Pic courtesy Knickerbocker Village, who guesses photo to be from 1920s) 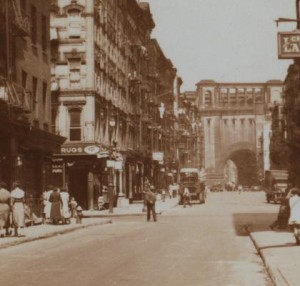 I’m not referring to the part of Central Park called Cherry Hill or even the upstate farm of Cherry Hill, best known for the prominent New York family the Van Rensselaers.

Downtown Manhattan’s Cherry Hill once lay near the waterfront in the area more literally called Two Bridges today, between the Brooklyn Bridge and the area just northeast of the Manhattan Bridge. Â The Two Bridges Historical District was created in 2003, just to the north of the site of old Cherry Hill. Â Indeed there is nothing much left of the Cherry Hill neighborhood at all.

In 1890 Jacob Riis, in documenting what the neighborhood had become, referred to its early days as the “proud and fashionable Cherry Hill.” (pictured below)

Named for a Dutch cherry orchard, Cherry Hill featured a row of homes with a beautiful vista of the East River and hosted no less than George Washington‘s during his first term as president, at 1 Cherry Street. Â Although he later moved to 39 Broadway, the neighborhood remained high on the list of the rich and important, including John Hancock (at 5 Cherry Street) and DeWitt Clinton (who moved into Washington’s old home).

Below: An illustration ofÂ the more genteel days of Cherry Hill, taken from the book When Old New York Was Young (written in 1902)

Even as late as the 1824, the area featured fine homes such as that of Samuel Leggett, founder of the New York Gas Light Company (later Con Edison), who enjoyed New York’s first interior gas lighting. Here’s a picture of the first gas-lit home at 7 Cherry Street. (More information here) 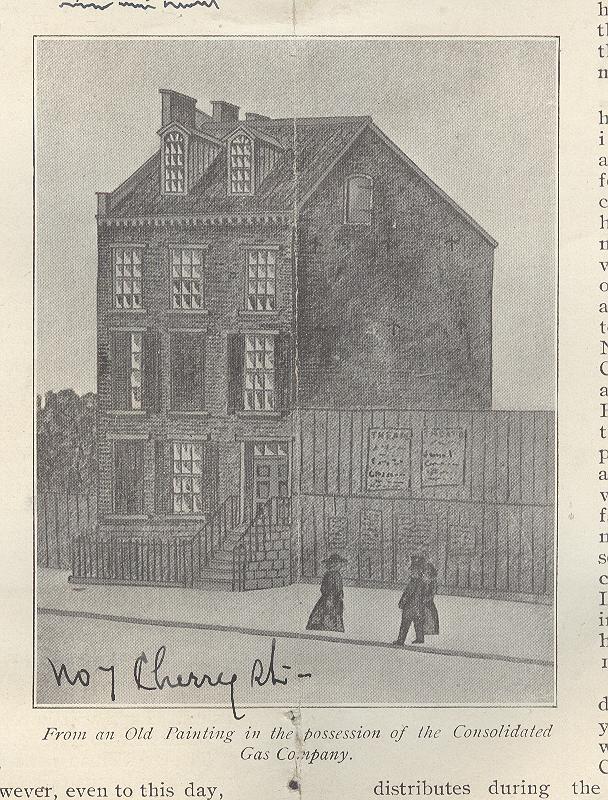 If you’re looking for a symbolic date of Cherry Hill’s demise, look no further than April 3, 1823, birth date of William ‘Boss’ Tweed, who was born here and worked at a Cherry Hill chair shop in his early years.

Below: Mullen’s Alley in Cherry Hill, picture taken by Jacob Riis in 1890. Courtesy the Museum of the City of New York 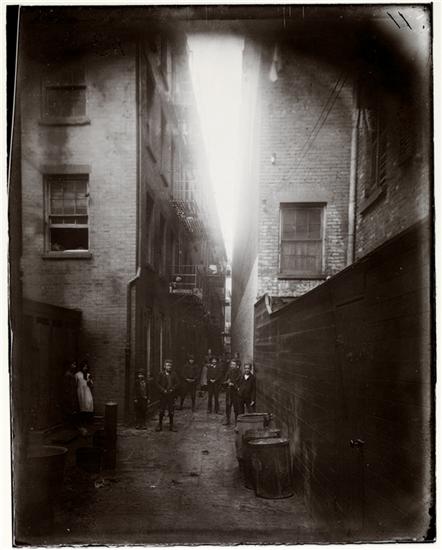 As many well-to-do neighborhoods would later do, Cherry Hill devolved into a slum, paralleling the decline of nearby Five Points. Its well-intentioned tenements soon became the worst in the city.

Located in the Fourth Ward, Cherry Hill abutted the saloons, boarding houses and brothels along Water Street, including the legendary Hole In The Wall (today’s Bridge Cafe). None of this would assist the neighborhood in escaping its fate.

Below: Blindman’s Alley at 22 Cherry Street, taken by Jacob Riis

Cherry Hill is most unfortunately known for its most horrific slum — Gotham Court, “one of the worst tenements along the East River.” It would later be made infamous in Jacob Riis’ renown 1890 blistering survey of How The Other Half Lives. Â According to Riis:

“It is curious to find that this notorious block, whose name was so long synonymous with all that was desperately bad, was originally built (in 1851) by a benevolent Quaker for the express purpose of rescuing the poor people from the dreadful rookeries they were then living in.” 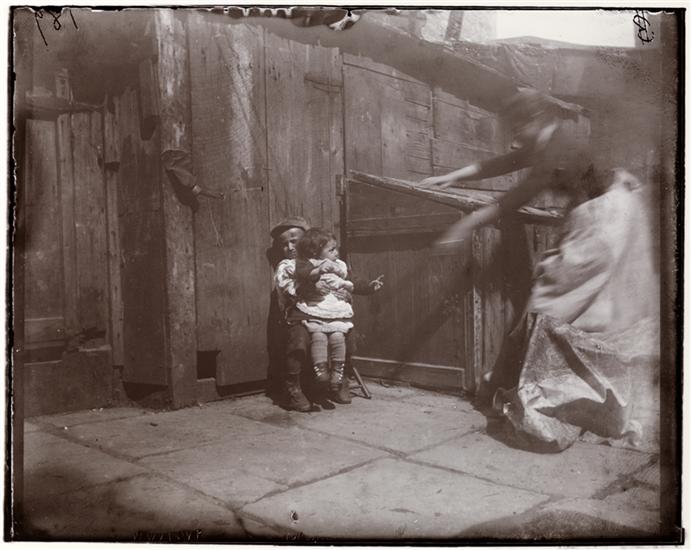 How long Gotham CourtÂ continued to be a so-called model tenement is not on record. It could not have been very long, for already in 1862, ten years after it was finished, a sanitary official counted 146 cases of sickness in the court, including â€œall kinds of infectious disease,â€ from small-pox down.”

In 1894, the New York Tribune went as far as to make several attempts to describe Gotham Court as a prison. FromÂ the piece ‘Life in Gotham Court’:

â€œThe side alleys are narrower. They are not more than three or four feet wide.Â  In order to enter either of these alleys one has to pass through an iron arch.Â  The gate has been taken away, but enough remains to give unpleasant suggestions of a penitentiaryâ€¦..

The idea is not dissipated by the appearance of the houses inside the alley.Â  The small windows with tiny panes of glass, the low, dark doors, through which iron gratings can be seen, and the bare brick walls are like those of a prison.Â  The people move about free, as the prisoners do during â€˜exercise hourâ€™ at the Tombs.Â  All the doors are alike, all the windows are alike, and all are dilapidated, forlorn and forbidding.â€

Gotham Court and the rest of Cherry Hill were not long for this world. In the wake of Riis expose, Gotham Court was demolished in 1897. By that time, efforts were made to construct more amenable tenements, including those built at 340, 342 and 344 Cherry Street in 1888. (See below, courtesy of Maggie Blanck) 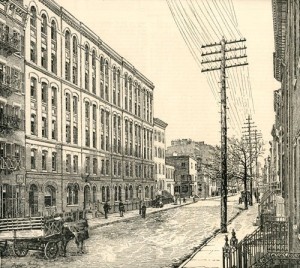 In its place would be more ambitious housing “super projects,” most notably one in the form of the Alfred E. Smith Houses, built in 1953 and named for the governor and saavy politico born very close by, at 25 Oliver Street. His old street and a couple around it may give you the closest idea of what some areas of Cherry Hill may have looked like in earlier years.

Two maps — one block of tenements in Cherry Hill in 1890 (from a map by Jacob Riis) and a Google map of the same block today: 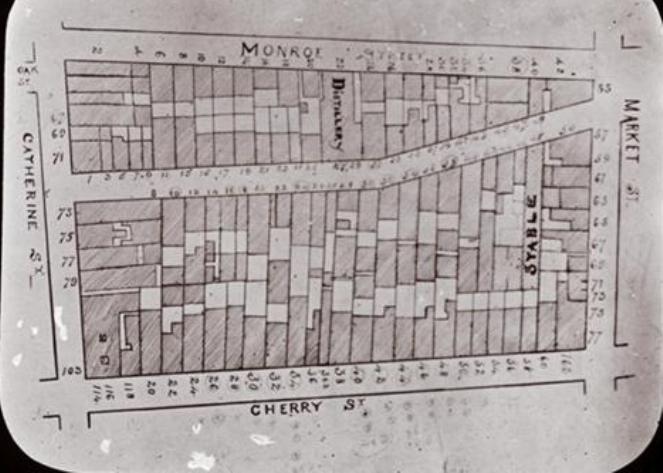 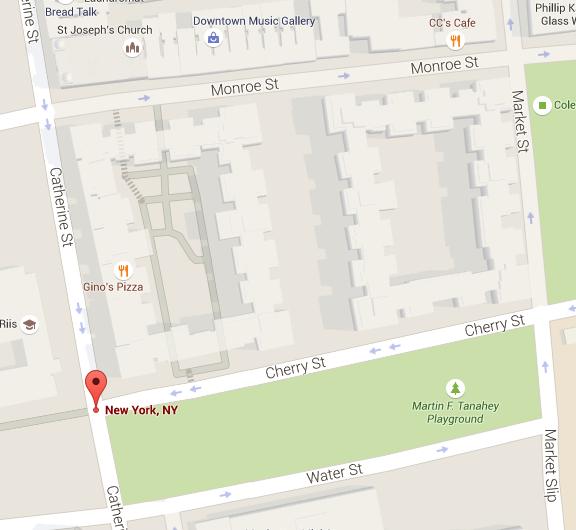 Given its rather uniform appearance, I found it quite impossible to picture Cherry Hill’s early days here.

A shortened version of this article originally ran August 18, 2008. I’ve left the comments from that original run as they relate to the history.

Interesting history. My beloved mother and uncle were raised on Cherry Street, “Cherry Hill.” There are amazing details describing Cherry Hill in a book my uncle wrote and left to our family.Mainly the Basque, Spanish, and Portuguese of Cherry Hill who resided there in the 1920’s-early 193o’s were very poor but undenyingly proud of being from Cherry Hill.

Please let us have the name of the book.

hi…i have an old newspaper clipping about a fire that happened at 322 or 326 Cherry Street, NY. My family lost all they had in the fire. I don’t know the date…early 1900’s. A Patrolman Thomas Dougherty of the Clinton Street station saved them. How can I go about finding the date of the fire? I am not having any success. My email is ihb555@comcast.net Thank you. Irene

A seach of ‘Cherry Street fire’ in the New York Times archives results in numerous articles. Perhaps one of them pertains to the one that affected your family.

Try contacting the New York City Fire Museum (http://www.nycfiremuseum.org/) for suggestions. You can also try searching the New York Times website and via Google Books, but there may or may not be anything there. Unfortunately “Thomas Dougherty” is probably a pretty common name. Good luck!

Another infamous New Yorker connected to Cherry Street is Johnny “Dynamite” O’ Brien. Johnny was educated on Cherry Street in his trade as seaman, he mentions being schooled on Cherry Street in his autobiography A Captain Unafraid. Though I’m sure he wasn’t the first man to be “schooled” on Cherry Street! (it being a rough auld spot over the centuries), I’m pretty sure it was a legit schooI. That would have been in the 1850’s. Would you have any idea as to the possible location of the school? I don’t have his book with me at the moment but it might have some more info on the street. I’m putting together a documentary film about Johnny, and was wondering what the street looks like now? it seems a nondescript avenue on google maps. I’ll hopefully be filming in New York later in the year and was wondering if it might be a possible location, any hidden gems on the street that might evoke something from a time thats gone? As I’m on the subject, where would you recommend to shoot for a dockside scene, possibly evoking something of old New York, or perhaps just an interesting dock location in Manhattan, emphasising the humongous difference between the two eras? Just a shot in the dark, no worries if can’t help.
The facebook page for the film is
https://www.facebook.com/ACaptainUnafraid
I keep coming back to this blog for information on New York in the 1800’s-it’s always informative and a pleasure to read! Thanks.
beir bua
Charlie O’ Brien

I have a photo of my great great grandfather’s pub on Cherry Street. It is number 18…but possibly had a third digit in front of that. Do you have any knowledge or concept of the block addresses?…or would you know where this could have been?
Thank you.

No mention of the notorious ‘Lung Block’ shown on the map. It had the highest concentration of TB in the city.

Susan..my gg grandmother lived at 395 Cherry St. during the Civil War..My grandfather was in the 162nd Regiment..I, too, would love to find out about living conditions in that area. Also hoping the higher numbers of Cherry St were better than the lower.

Would love to stay in touch and compare notes..

My cousin found an interesting article. It mentions my grandmother address. She lived there in 1864, The article states in 1865 a former Captain in the Civil War opens a Saloon there. He was quite involved in trying to keep the Gaelic language alive. Here is the link: http://irishamericancivilwar.com/2016/04/03/a-few-spoke-nothing-but-gaelic-in-search-of-the-irish-language-in-the-american-civil-war/