If it’s August in New York City, then it’s time for the annualÂ Summer Streets festival, when traffic is closed down from the Brooklyn Bridge to Central Park, along Lafayette Street and Park Avenue all the way up to 72nd Street. (A copy of the map is below or you can also get one from the Summer Streets website.) Â Get up early and enjoy a corridor of unencumbered walking and biking, with tons of activities along the way, from 7 a.m. to 1 p.m.

Since you’re walking around and don’t have to worry about much traffic, put our podcast in your ears! We’ve actually spoken at length about many destinations along this route. So take one of these shows with you and experience a little history right where it happened.

As always you can download it from iTunes or other podcast aggregators, or you may right-click onto the links below. You can also stream directly from our Libsyn site and can also listen to any of these episode on Stitcher Radio, TuneInÂ or PodBay: 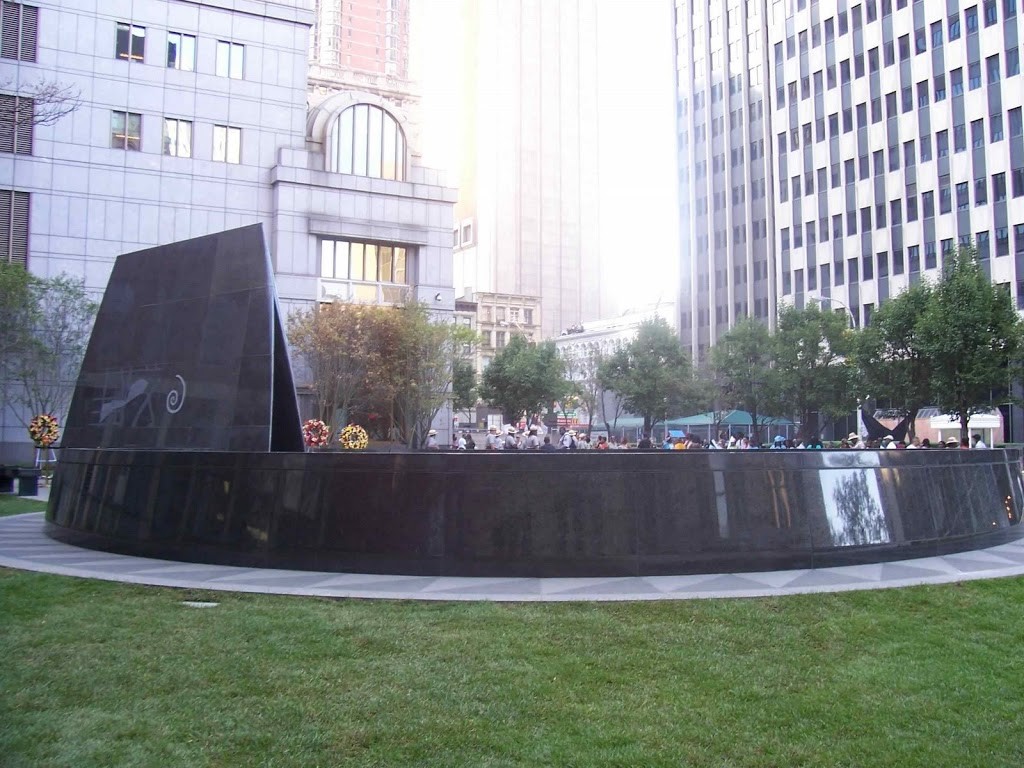 1.Â AFRICAN BURIAL GROUND
The Summer Streets route begins near Foley Square, partially situated atop the remains of an ancient burial ground belonging to New York’s original black population. Take a gander at the extraordinarily unusual monument to the west of the square before you begin your walk. [Download] [Original blogÂ post]

2. COLLECT POND AND THE HISTORY OF CANAL STREET
You’ll progress up Lafayette Street and past Collect Pond Park. It was hereÂ that the city’s source of 18th century water once sat,Â an eventual cesspool that had to be drained via a canal (whichÂ then became Canal Street). [Download] [Original blog post]

3. THE BIG HISTORY OF LITTLE ITALY
All to the east of your stroll up Lafayette Street you’ll pass Little Italy, the historic neighborhood that was once the heart of New York’s Italian community. While it’s drastically transformed in the past few decades — it’s mostly a tourist-friendly version of its former self — there are still a number of businesses that date to the early 20th century. [Download] [Original blog post]

4. THE EC COMICS OFFICE
(featured in ‘New York and the History of Comic Books‘)
One of the first Summer Streets rest stops will be at the corner of Spring Street and Lafayette Street. At 225 Lafayette (pictured above) sits an old bank building which was the former offices of EC Comics, a crime and horror publisher who scandalized some readers with their graphic subject matter. They were on the front lines waged by reformers in the early 1950s to shut down the entire industry.
[Download] [Original blog post]

5.Â THE PUCK BUILDING
Lafayette Street seems nice so far, right? The street is a bit of a destroyer however, lobbing off an original section of the Puck Building when the road was expanded south. Oh, but this former home of a 19th century satire publication is full of many surprises. Â [Download] [Original blog post]

6. ASTOR PLACE RIOTS
Lafayette Street was named by John Jacob Astor who developed many luxury properties in this area — and hundreds of far less luxurious ones everywhere else.Â  The grand Astor Place Opera House once sat where Lafayette meets the Bowery and was the site of a terrible night of violence in 1849 — all over a Shakespearean performance.Â Â [Download] [Original blog post]

7.Â UNION SQUARE
You’ll take Fourth Avenue all the way to 14th Street, where you will be greeted with one of New York’s most popular parks. Union Square used to be an oval and also the centerpiece of high society in the mid 19th century. As you begin your walk up Park Avenue South, take note of the petite sculpture of the namesake of the street where you began your walk — the Marquis de Lafayette. [Download] [Original blog post]

Above: The National Academy of Design, which sat on the corner of 23rd Street and Fourth Avenue (Park Avenue South), 1902

8. GRAMERCY PARK
At 21st Street, take a one-block detour east to one of the most exclusive neighborhoods in Manhattan. Gramercy Park was a visionary project that created a haven for the mid-19th century’s most famous New Yorkers. It was considered so extraordinary that two new streets — Irving Place and Lexington Avenue — were essentially created because of it. While you won’t get to go inside the park, we take you to its four corners in a breezy walking tour. Â Side note: This was our most popular podcast from 2014! [Download] [Original blog post]

9. THE ARMORY SHOW OF 1911
At the midtown rest stop at 25th Street and Park Avenue, take a one block detour east to Lexington Avenue. Here you will find the great 69th Regimental Armory, completed in 1906 and perhaps most famous for an event which occurred here five years later. The Armory Show of 1911 was the greatest assemblage of art in New York up to that time, a mix of modern art from European and American artists. The displays scandalized New Yorkers and changed the way people looked at and collected art. [Download] [Original blog post]

10. GRAND CENTRAL
Oddly enough, one of my favorite parts of Summer Streets involves the one moment you’re blocked from the sun. With no vehicles, pedestrians are able to walk around the classic structure via the elevated road. You can also closely check out the statue to Cornelius Vanderbilt, who changed the city forever with his railroad and ferry acquisitions. [Download] [Original blog post]

11. MET LIFE BUILDINGÂ (PAN AM BUILDING)
This is probably the structure you’re the least excited to see, but hopefully, in our podcast (a personal favorite of mine), we make a convincing case for giving this building its proper due. [Download] [Original blog post]

12. CENTRAL PARK
After a jaunt up the canyon of Park Avenue,Â the route will end in Central Park. Â The history of New York’s most famous park is so impressive we broke up its history into two shows — the first on the innovations by park creators Oldsted and Vaux, the second of the vast changes were made by later New Yorkers. Â Most notably Robert Moses! The Creation of Central Park — [Download] Â [Blog post] Â The Evolution of Central Park — [Download] [Blog post]