The original Waldorf-Astoria Hotel, the ultimate symbol of the Gilded Age, was demolished in the fall and early winter of 1929 to make way for a new building project.

That the building project in question happened to be the Empire State Building does not make the loss of the Waldorf-Astoria any less regretful. The storied hotel, borne from the rivalry of two factions of the Astor family, was the delight of New York’s upper crust from the moment the Waldorf Hotel opened in 1893. (The Astoria side opened four years later.)

The hotel was an extraordinary piece of architecture, a gracious (if elitist) piece of New York history. Scientific breakthroughs were announced here, Nikola Tesla lived here, and even its telegraph offices were revolutionary.

But the fashions of New York had passed the Waldorf-Astoria by in the 1920s, and the land was sold to a collective of businessmen — led by former New York governor Al Smith — who wished to build the world’s tallest office building on the spot.

Following a final dinner party on May 1, objects from the hotel were sold at auction. The relinquishing of the hotel’s possession was so captivating that the auction was even broadcast on the radio, a fairly revolutionary idea for its day. “The famed bronze pair [of statues], a large bull and a big bear, which stood on the bar in the hotel for so many years, went to Charles Gutradt & Son, art dealers, for $225 each.” [source]

This was not a building that was dispensed with lightly. The year 1929 was crammed with newspaper and magazine reminders of the hotel’s greatness. “Histories will keep its fame and name alive, for it marked an epoch in the development of an empire city. In its day it gathered together a remarkable clientele; at its banquets the wit and wisdom of the New World and the Old intermingled, stimulated by savory viands and sparkling winds (in pre-prohibition days) from a well-stocked cellar.” [source]

An illustration of one auction of Waldorf-Astoria objects from 1929:

Demolition of the Waldorf-Astoria would take a couple months, owing to difficulties of dismantling the especially sturdy materials holding up the hotel. The process began on October 1st with a somber ceremony on the rooftop, officiated by Smith and his business partners.

He was quoted as saying. “This historic building, known all over the world, must come down in the northward march of progress.”

From the New York Times: “Yawning holes mark the doorways where livered attendants greeted distinguished guests. Men in overall bustle about amid dust and debris in Peacock Alley. The men’s cafe, once a favorite haunt of millionaires, and the giant ballrooms are bare.”

Work began on the Empire State Building on March 17, 1930, despite the fact that America (following the stock market crash of 1929) was on the precipice of the Great Depression. Meanwhile a new Waldorf-Astoria would open uptown, on Park Avenue, on October 1, 1931. The Empire State Building had opened (in record time, it must be said) exactly five months before, on May 1, 1931. New York City had itself two new impressive landmarks. 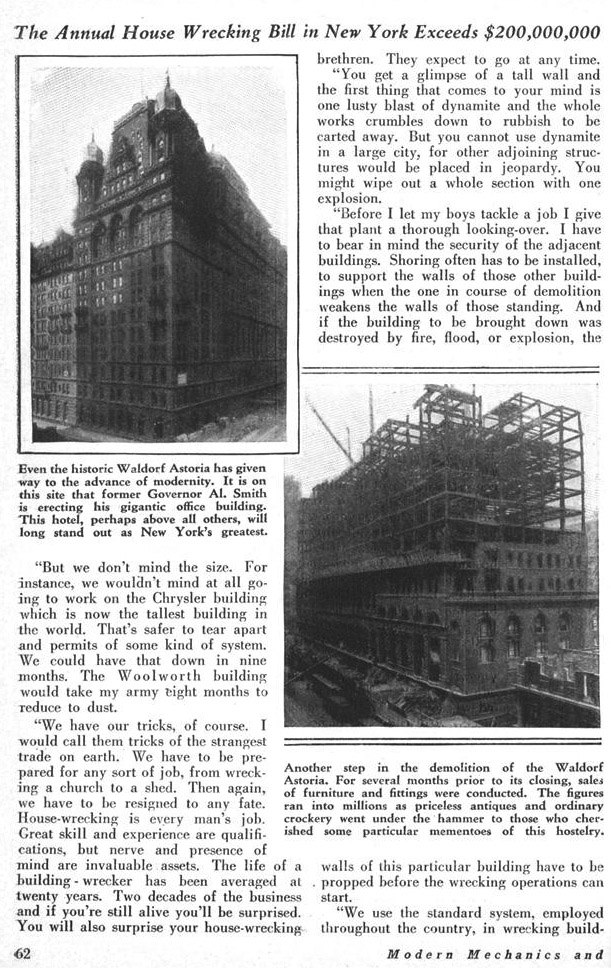 At top: The decorations for the Dewey Parade in front of the Waldorf-Astoria Hotel at 33rd Street and 5th Avenue, 1899.

For more information on the new Waldorf-Astoria hotel, listen to our 2016 show: