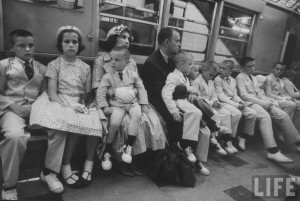 Thanks for listening in on our several-part series of podcasts on the history of New York City public transportation. We’re moving on to other topics — although I’m not quite done with the subway (more on that next week).

You can download any of the shows from iTunes or other podcasting services, or straight from the links below:

Part Three: Cable Cars, Trolleys and Monorails
Electrified trolley cars became the most common form of travel in New York starting in the 1890s and into the new century. Find out why they succeeded and why two other forms — cable cars and monorails — did not.
Blog: Cable cars, trolleys and monorails; Moving around on New York’s transportation options
Download here

Part Four: New York City Subway, Part 1: Birth of the IRT
The story of the very first subway which went nowhere (Alfred Ely Beach and his pneumatic tube train) and the one that eventually did (August Belmont and the Interborough Rapid Transit).
Blog: The New York City Subway and the Creation of the IRT
Download here

Part Five: New York City Subway, Part 2: By The Numbers (And Letters)
The surprisingly difficult attempt to expand the subway system and the curious public/private partnership which got it done. Plus: the history of the future of the Second Avenue subway line
Blog: Modern history of the New York Subway: Expansion from the 1-2-3, A-B-C, Second Avenue and beyond
Download here

2 replies on “The History of New York Public Transportation: Recap”

Last night I stumbled across a documentary probably made in the late 80s, early 90s, on the history of the subway. And as I watched, I kept remembering tidbits from your podcast. The 45 minute documentary didn’t cover nearly as much as you did! But now the podcasts are back on my ipod to listen to again!

RidgewoodMom — Any chance remember the name of the video?