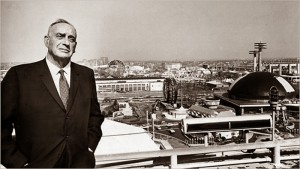 One hundred and twenty-five years ago today, Robert Moses was unleashed upon the world, born in New Haven, Connecticut, on Dwight Street.  He remains today one of the most powerful civic figures in American history, and obviously one of the most controversial.  Because of Moses, we have the modern New York City.  Many of its strengths and its difficulties can be traced, in some way, to decisions he made, from roads and housing to parks and waterways.

Can you really “celebrate” Robert Moses?  Of course you can.  Here’s ten particular ways you can ruminate upon the changes he inflicted upon the city, from the mighty highways to the large, concrete-heavy parks.

An excerpt: “Robert Moses was, in every sense of the word, New York’s master builder. Neither an architect, a planner, a lawyer nor even, in the strictest sense, a politician, he changed the face of the state more than anyone who was. Before him, there was no Triborough Bridge, Jones Beach State Park, Verrazano-Narrows Bridge, West Side Highway or Long Island parkway system or Niagara and St. Lawrence power projects. He built all of these and more.” 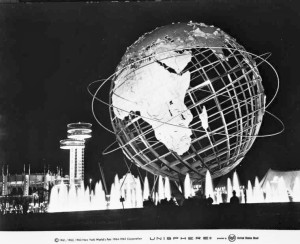 The Unisphere is still around (and presumably in no danger), but the New York State Pavilion, seen in the background, could face demolition. (NYPL)

2) Help save the New  York State Pavilion.
The curious remnants that remain of the World’s Fair 1964-65, located in Flushing Meadows-Corona Park, are in danger of being torn down.  Certainly Moses himself would have approved of tearing down these useless — and yet, priceless — relics.

After the city projected it would be cheaper to tear them down than to renovate, many in the community rallied to save the embattled old ruins.  A couple weeks ago, Gizmodo asked the question ‘Should Queens Tear Down The 1964 World’s Fair Pavilion’.  Prepare an interesting preservation battle over this historic piece, designed by Philip Johnson. 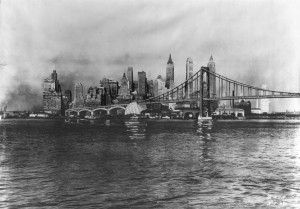 In particular, go to Battery Park and physically embrace Castle Clinton if you can. (It was still behind fences last I checked.)  Moses wanted to construct a bridge over to Brooklyn that would have wiped it from existence.  From my original article:  “The Brooklyn-Battery would be designed by bridge master Othmar Ammann, designer of nearly half the bridges of New York City, with an anchorage plopped in the middle of Governor’s Island.”

Fortunately, the community intervened, and the Brooklyn-Battery Tunnel was built in its place. But a vision of what it might have looked like is above.  (Courtesy Urban Omnibus)

4) Visit those neighborhoods he did replace.
This is a far more depressing stroll and far more common.  Moses’ use of funds from Title I of the 1949 Housing Act replaced some serious New York slum conditions with low-income housing developments, but some of it was poorly designed and shoddily planned.  According to Joel Schwartz, “To a generation of critics … Title I was also synonymous with reckless power that went unchecked until a small band of urban liberals rallied the conscience of the city.”  Not surprisingly, Moses focus was on neighborhoods that were predominantly black and Latino.

Most striking of these was East Tremont in the Bronx and Manhattantown on Manhattan’s Upper East Side:

Over at Randall’s Island,  you should visit the Triborough Bridge Authority Building, which was the homebase for Moses for decades.  It was here that many of his greatest triumphs — and a few city downfalls — were planned. 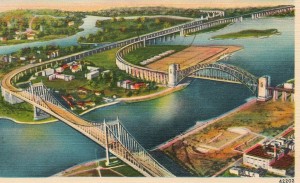 6) Check out the ghastly Robert Moses mosaic in Flushing-Meadows Park.
The mosaic underfoot is based upon a work by Andy Warhol which the artist created after Moses destroyed Warhol’s outdoor art piece involving the FBI Most Wanted list. From my previous article ‘Most Wanted: Robert Moses vs. Andy Warhol’:  “[H]is mural was literally whitewashed. Warhol intended to replace it with a new design: 25 silkscreen panels of Robert Moses’ face in a Joker-like grin. Unsurprisingly, [Philip] Johnson did not think this appropriate for the main pavilion of Moses’ fair.”

Listen to the WNYC piece from 2010 for more information!

7)  Ponder his vast, virtually unchecked power.
Can you imagine if a politician or city leader were actually as successful as Robert Moses in getting anything done?  His reach and output makes him one of the most powerful city builders in modern human history.

He was so powerful, in fact, that he changed the names of neighborhoods — on a whim!  Like Throggs Neck, for instance.  Excuse me, Throgs Neck.

From my article on the origin of the name: “You may have noticed that John’s last name [Throgg] has two g’s in it, while most common spellings have only one. Legend has it that this is another thing you can blame on Robert Moses.  Not exactly known for reaching out to communities for their thoughts and opinions, Moses decided to drop a ‘g’ in 1955 when the bridge started construction, believing it would fit on more traffic signs without an additional and needless letter.  Who cares if it was in use that way for over 300 years!”

8) Watch Robert Moses on TV in 1953
Moses was even a guest on an early television show called Longines Chronoscope, sponsored by Longines.  This isn’t the most fascinating television that was ever made, but it’s interesting to hear Moses’ authoritative voice during the era of his greatest power.

And check out this bonus video on Robert Moses’ “improvement plans” for Coney Island:

9) Visit his burial site
He’s buried in a crypt at Woodlawn Cemetery in the Bronx.  So is his most prominent collaborator, Mayor Fiorello LaGuardia.

10) Listen to our podcast (Episode #100) on Robert Moses, our longest-ever show!

And check out our other podcasts and pages which feature Robert Moses and his effects on the city including the Verrazano-Narrows Bridge, Shea Stadium, Shakespeare In The Park,  The Rockaways and Rockaway Beach and Central Park

Below:  The glory that was Shea Stadium  (NYPL) 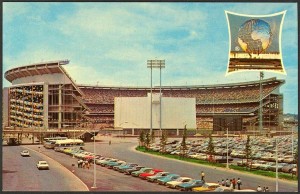