PODCAST Hell’s Kitchen, on the far west side of Midtown Manhattan, is a neighborhood of many secrets. The unique history of this working class district veers into many tales of New York’s criminal underworld and violent riots which have shaken the streets for over 150 years.

This sprawling tenement area was home to some of the most notorious slums in the city, and sinister streets like Battle Row were frequent sites of vice and unrest. The streets were ruled by such gangs as the Gophers and the Westies, leaving their bloody fingerprints in subtle ways today in gentrified buildings which at one time contained the most infamous speakeasies and taverns.

We break down this rip-roaring history and try to get to the real reason for its unusual name!

The mysteries begin over 200 years ago when ordered avenues and streets could scarcely be imagined, and the shoreline was a ragged coast.

The Dutch later called it the Great Kill District, for the creek which emptied into the Hudson River (North River) at 42nd Street. As you can see from this diagram the shore was evened out with landfill to create 12th Avenue although the inward dip at 43rd Street is still visible on a modern map. 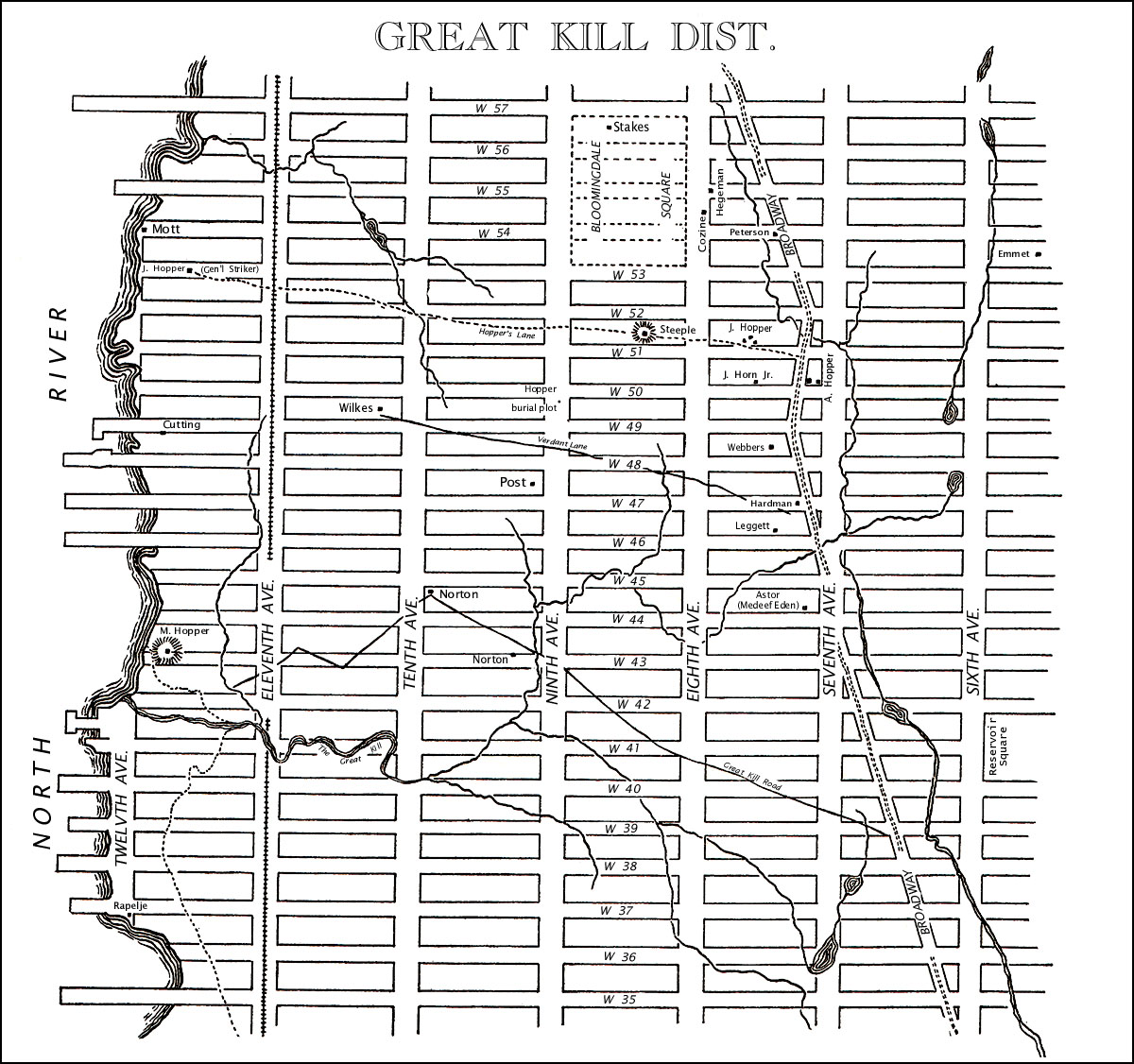 A map (drawn by John Bute Holmes) of the original estate borders of Bloomingdale from the late 18th century. The jagged shore line would later be filled in to make the blocks between 11th and 12th Avenues.

The Ninth Avenue barricades made by rioters in the area of Hell’s Kitchen during the Civil War Draft Riots. 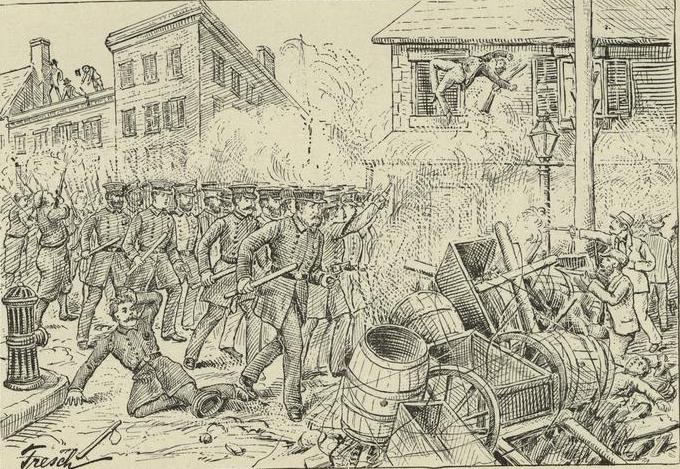 The Orange Riot of July 12 from Eighth Avenue south from 25th street, an 1871 image from Frank Leslie’s Illustrated Newspaper. 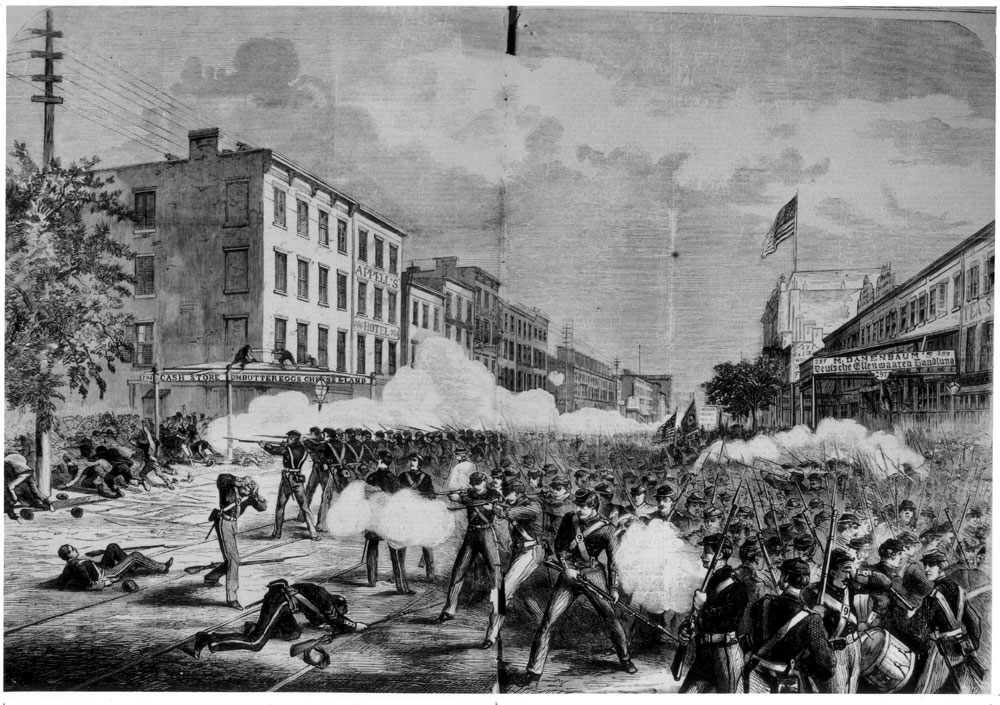 Bad boys: Some Hell’s Kitchen ruffians show Jacob Riis how to rob people who have passed out.

An intriguing shot of 58th Street between 8th and 9th Avenues

Jacob Riis’ photograph of the Hell’s Kitchen tenement and the remains of Sebastopol (the rocks), 1890

The Hartley House, a settlement house for the Hell’s Kitchen community. on West 46th Street

At the recreation pier — a public swimming hole at West 51st Street and the Hudson River.

The later configuration of the Gophers. Owney Madden is on the back row, fourth from the left. A very rough and dangerous gang, but don’t they clean up nice?

Owney Madden, the king of the Hell’s Kitchen speakeasy racket. 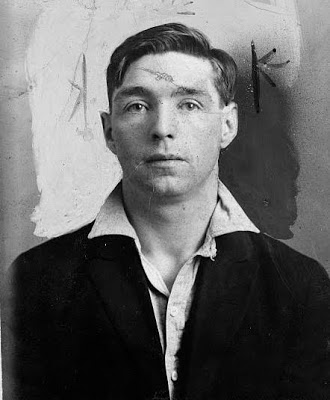 A couple spectacular shots of 1938 slum clearance — eliminating the tenements of 37th Street.

The entrance to DeWitt Clinton Park (at 54th Street) in 1936

Most of the pressures faced by the Hell’s Kitchen neighborhood came from its perimeter with dramatic changes to the waterfront to its west, Port Authority/Lincoln Tunnel to its south, Madison Square Garden/Times Square to its east and Lincoln Center/Columbus Circle to its north.

Below: The West Side Highway and piers 95-98, looking west from a roof on West 54th Street

The 8th Avenue Madison Square Garden, as seen in 1935.

A mural from 1974 — “The Neighborhood Belongs to the People Not Big Business.”

wow, I live right in the heart of this now! love the history I’m living on!

Great episode, as always! Did you notice that the incident that set off the riot of 1900 (Harris attacking out-of-uniform Irish policeman who accosted his girlfriend, resulting in the latter’s death and the ensuing rioting) is portrayed in season 1 episode 7 of The Knick (“Get the Rope”)?

I enjoyed the episode until the end, where you completely failed to mention the impact of the gay community in Hell’s Kitchen. A cursory mention of Flaming Saddles doesn’t cut it.