Skip to the content
Â Open House New York is the absolute best time of the year to wander the city and visit dozens of New York City’s greatest historical landmarks and architectural wonders. Â Unfortunately, reservations for someÂ of those places pretty much filled up within ten minutes.
But never fear! This year, it seems that aÂ greatÂ number of the most interesting ones don’t needÂ reservations and are wander-in-as-you-please type venues. Go toÂ their website or pick up a copy of the Open House schedule and stitch together some great weekend plans.
Below are some my personal recommendations, ten must-see stops for your weekend. Â I’ll be spending my weekend hitting several Open House sites, including some of those listed below. Â You can follow along with my trek through the city on Twitter (@boweryboys).
For a few of these, I’ve also made some podcast listening suggestions; you can download those older Bowery Boys episodesÂ from the links,Â pick them up on iTunes, or stream them on Stitcher and other services.

All the times below are from the Open House New York website. Please check their site before you go for any changes!

Manhattan, Broadway at Murray Street
12 pm – 4 pm
They’re opening City Hall for free tours? Well, technically, they already give limited tours. But having them as part of Open House NY is a rare treat. Just bring a photo ID and probably get there as early as possible.
Before you go: Listen to our podcast on the history of New York City Hall. Â
In the neighborhood: Take a trip to the Manhattan Borough President’s Map DisplayÂ or visit the African Burial Ground.

Manhattan, 120 West 14th Street
Saturday, October 17: Â 10am – 2 pm
The Salvation Army’s cavernous theater, rarely opened for tours, is a beauty to behold. To quote Daytonian in Manhattan: Â “Ask three architectural historians to identify the style of the Centennial Memorial Temple and you will get three separate answers.Â  It is variously tagged Art Deco, Ziggurat Moderne, and German Expressionism.Â  I have my own term:Â  Wizard of Oz Art Deco.” There’s no place like 14th Street.
In the neighborhood: The beautiful Grace Church is open all weekend. Â And don’t forgetÂ The Masonic Temple of course!

Staten Island, St. George, 200 Promenade at Lighthouse Point
Saturday and Sunday, October 17-18) 11am – 5pm
A brand new museum for New Â York City makes its home in theÂ United States Lighthouse Service Depot near the ferry terminal. Almost as interesting as their collection is aÂ history of the site itself,Â Â “comprised of six historical buildings that date back to the time that the site was the location of the U.S. Lighthouse Service, where all items used by lighthouses around the country were manufactured.”
In the neighborhood: It’s just a short cab or bus ride over to Snug Harbor Cultural CenterÂ or down to the Alice Austen House. 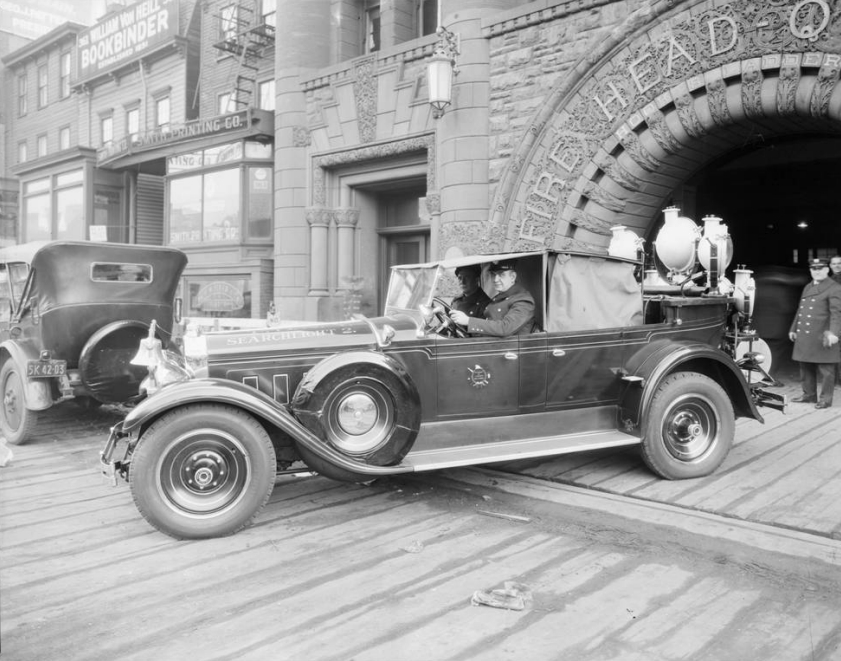 Downtown Brooklyn, 365 Jay Street
Saturday, October 17, 10am-4pm
I’ve been fascinated by this curious building for years. And now you can climb to the top! “On OHNY Weekend, climb the six flights up to the historic crow’s nest to see where Brooklyn’s fire fighters once watched the horizon for plumes of smoke.”
Before you go: Listen to the Bowery Boys podcast on the history of the New York City Fire Department
In the neighborhood: Admire the beautiful architectures of the Brooklyn Historical Society or take a tour of the magnificent Brooklyn Academy of Music.

Brooklyn, Prospect Park via Grand Army Plaza
Saturday and Sunday, October 17-18, 10am – 6pm
Olmsted & Vaux’s most opulent creation within Prospect Park, an “Alice-in-Wonderland kind of place,” is finally being renovated. “The creation of the Zucker Natural Exploration Area was a first step in this process, and upcoming projects include the restoration of the woodlands and Flatbush Avenue perimeter.”
Before you go: Check out our podcast on the history of Prospect Park
In the neighborhood: Take a tour of the Central LibraryÂ or visit the Old Stone House.

Queens, LaGuardia Airport
Saturday and Sunday, October 17-18, 10am – 6pm
Going to LaGuardia Aiport — on purpose? Â Trust me. This is worth the trip. The Marine Air Terminal isÂ one of the oldest parts of the airport and the most beautiful. Â “The striking circular space is planned with rational simplicity: two stories high with a three-tiered, skylit ceiling. Deep green marble walls set off its defining feature: a vividly colored wraparound mural by James Brooks depicting the history of flight and man’s quest to conquer the skies.”
Before you go: Listen to the Bowery Boys podcast on the history of LaGuardia Airport

Queens, Flushing-Meadows Park
Saturday and Sunday, October 17-18, 1pm – 5pm
This enduring ruin of the New York World’s Fair has been newly painted, coming as close to looking like its old self. Â “The New York Structural Steel Painting Contractors Association donated their services to re-paint the building’s iconic crown in the original shade of “American Cheese” yellow, brightening the Philip Johnson-designed landmark just in time for the 50th Anniversary of the closing of the fair. Long lines are expected; arrive early!”
Â Before you go: Listen to the Bowery Boys podcast on the history of the New York State Pavilion. This show co-stars filmmaker Matthew SilvaÂ who gives some exclusive insight into the structure’s later years.
In the neighborhood: Take a tour of the grounds of the old World’s Fair (both of them)Â then race over to the Queens Museum to check out the Panorama!

Bronx, Bronx Community College, 2155 University Avenue
Sunday, October 18, Noon – 4pm
Nestled within the spectacular architecture of Bronx Community College is a true throwback — the Hall of Fame forÂ Great Americans, a procession of busts celebrating a wide assortment of American inventors, thinkers and civic leaders. Â They stopped updating this many decades ago but its tranquil setting will convince you that you’re on the set of some film set on Mount Olympus.
In the neighborhood: While on the campus, visit the sumptuous Gould Memorial Library and the truly astounding Brutalist masterpieces designed by Marcel Breuer.

Manhattan, 321 East 73rd Street
Saturday, October 17, Noon – 4pm
Here’s an intriguing surprising on the Upper East Side, celebrating New York’s early Czech and Slovak immigrant culture. The building itself is glorious as is the view from the roof! “Established in 1892, the Bohemian National Hall has been a center for Czech and Slovak immigrants on the Upper East Side of Manhattan for more than a hundred years. It is one of the few well preserved original Czech buildings left in New York City and an important symbol of the Czech contribution in the United States.”
In the neighborhood: Experience aÂ bit of 18th century civility at the Mount Vernon Hotel Museum or marvel at the largest synagogue in the world over at Temple Emanu-El.

Manhattan, 414 West 141st Street
Sunday, October 18,Â 6pm – 8:30pm
Alexander Hamilton’s old home will probably be one of the hottest destinations during Open House New York. Not just because of a certain musical, but also because the unique hours. Â Hamilton Grange will be open at night, allowing you to experience this classic mansion from a new perspective.

Before you go: Listen to the Bowery Boys podcast on the legendary duel between Alexander Hamilton and Aaron Burr.
In the neighborhood: Just nearby you can check out a tour of the unique architecture of City College, or, if you want to keep in a Revolutionary-era mood, stroll the old Morris-Jumel Mansion!

Can you tell us more about this? I’d want to find out some
additional information.