The thirst for water has transformed New York.

The Dutch were sold on the islandâ€™s placement in the harbor at the mouth of the mighty Hudson River, making it a convenient waypoint for explorers and traders. Soon its ports had built the foundation for New Yorkâ€™sâ€”and later Americaâ€™sâ€”financial sector.

The cityâ€™s most influential nineteenth-century businessman, Cornelius Vanderbilt, got his feet wet in business first with ferries and steamships before building his mighty railroad empire. Manhattan is surrounded by water, and yet early New York would almost be undone due to a lack of it.

Traces of the cityâ€™s centuries-long quest for clean drinking water can be found from the islandâ€™s tip to its topâ€”from the site of spring water wells down in Bowling Green to the relics of old water systems that weâ€™ve visited in the past few chapters.

But no monument to freshwater dominates quite like the High Bridge, the Romanesque wonder linking Manhattan to the Bronx over the Harlem River.

For many decades this majestic artifact, seemingly plucked from the hills of ancient Gaul, was a vital link in that great engineering triumph: the Croton Aqueduct.

With the dense river traffic below and the icky-brackish composition of the surrounding rivers, early New Yorkers had to look beyond their waterways for drinking water. They dug cisterns and hunted down springs, but these couldnâ€™t support the growing city.

By the late eighteenth century, Collect Pond, a so-called freshwater source located northeast of todayâ€™s City Hall, had become polluted by the industries that surrounded it, and valiant efforts to bring water from other sources during the Colonial era were dampened by debt and war.

In 1799 future vice president/murderer Aaron Burr hatched a grand business plan to construct a reservoir system that would distribute water via an elaborate network of hollowed-out logs. (Above: The reservoir and grandest structure of the Manhattan Company system, pictured here in 1825.)

Unfortunately for parched New Yorkers, he ended up using most of the funding for his company to establish a successful bank instead. More than a century and a half later, Manhattan Company merged with Chase National Bank to become Chase Manhattan, known today simply as â€œChase,â€ one of the largest banks in the world. But his water distribution efforts ended up being woefully inadequate, and left Manhattan high and dry.

By the 1830s the city was on the verge of a health crisis, as putrid water, poor sanitation, and all-around squalid living conditions culminated in a series of health epidemics and breakoutsâ€”which only heightened the urgent need for clean water.

In April 1835 New Yorkers were so desperate for a freshwater supply that they voted in favor of a seemingly impossible plan: a pipeline that would bring the pure waters of the Croton River, forty miles north in Westchester County, down to city residents. Only underscoring the emergency, eight months later the Great Fire of 1835 would ravage the city. The aqueduct couldnâ€™t be constructed quickly enough.

The elaborate project employed thousands of mostly Irish immigrants for many years (1837â€“1842). They constructed a sophisticated system of iron piping and brick masonry, which drew upon gravity to run the water through pipes and over arches, across the lush terrain of Westchester, and through the small towns that would later form the nucleus of the Bronx.

But how would the water get into the island of Manhattan? The aqueductâ€™s architects would need to find a way to keep it flowing across the Harlem River. Drilling technologies were not advanced enough in the 1840s to allow for a tunnel, so planners thought biggerâ€”and higher.

The High Bridge, at an elegant 1,450 feet long, is the oldest surviving bridge in New York. Completed in 1848, it not only brought the Croton water into the city, but it also made one heck of a statement noticed around the world.

New Yorkers had pulled off a technological miracle, borrowing engineering and architecture principles not attempted, on this scale, since the glory days of the Roman Empire. They were changing the course of one river forty-one miles away and sending its waters high above another.

â€œWater! Water!â€ wrote diarist and former mayor Philip Hone on October 12, 1842, â€œis the universal note which is sounded through every part of the city, and infuses joy and exultation into the masses.â€

When the water was finally turned onâ€”flowing on October 14, 1842â€”the city threw a bash bigger than any since the expulsion of the British in 1783.

The water flowed through pipes across the High Bridge and to a receiving reservoir in the area of todayâ€™s Central Park, and from there to a distributing reservoir at 42nd Street and Fifth Avenue.

From there it moved through the city, eventually to City Hall Park, where good, clean water shot high into the air and down into the City Hall fountain, to the delight of the public. Imagineâ€” enough water to waste in a fountain!

(At the time of the celebration, the High Bridge had not yet been completed, so Croton water crossed a temporary low bridge. The lofty span replaced the modest one a few years later.)

But the celebrated new system struggled to keep up with the demands of the growing city. In 1872, as masses of new arrivals from far-off lands crammed into tenements, an attractive water tower was constructed near the High Bridge to help increase the water pressure into the city.

By this time the High Bridge itself had turned into an attraction, a festive promenade where young gentlemen and their parasol-clinging lady companions could stroll, taking in the striking views of the still-forested landscape that surrounded them, while millions of gallons of clean water coursed beneath their feet.

But New York, growing larger every day, would need more water. Much, much more. The introduction of indoor plumbing would require an entirely new and much larger Croton system to be built, which opened in 1890 and employed the massive Jerome Park Reservoir in the Bronx to satisfy the demand.

But alas, with a million flushes came the end of the High Bridge as an active part of the water system. Its function replaced by unromantic pipes buried underground, the bridge and water tower were retired from service by 1949, and soon these structures modeled after antiquity became historical relics themselves.

Below: The High Bridge, lost in a haze, photographed in 1920

In a surprising twist given the unforgiving tendencies of city planners of the day, it was probably the beauty of the bridge and the tower that kept them from being ripped down in a bit of â€œprogress.â€ Motorists along the Major Deegan Expressway took moments from their traffic jams to reflect on the possible story behind these strange and magnificent artifacts, which grew more incongruous as the modern highway system developed around them.

Two years ago this month, the High Bridge was restored, not for the movement of water but for those visitors and their parasols (replaced by headphones, we imagine) to enjoy a one-of-a-kind perspective on their buzzing metropolis.

If you go — or rather, when you go, because you really must see it — reflect upon the water that once passed below youâ€”it helped this city grow.

HOW TO GET TO THE HIGH BRIDGE

Mass Transit: Take the A/C or the 1 train to 168th Street, get out and walk east. OR the M101 bus takes you right up to Highbridge Park

On the Bronx side, you can take the 4 train to Mt Eden Ave but it’s a bit of a walk west. Instead take the Bx11 or Bx13 bus

“If you are entering the High Bridge from the Manhattan side, please enter Highbridge Park at West 172nd Street and Amsterdam Avenue and walk east to the High Bridge Water Tower Terrace staircase down to the bridge level. If entering from the Bronx side, enter at University Avenue and 170th Street in Highbridge, Bronx.”

Some images from my trip there in November. It’s three times as beautiful now! 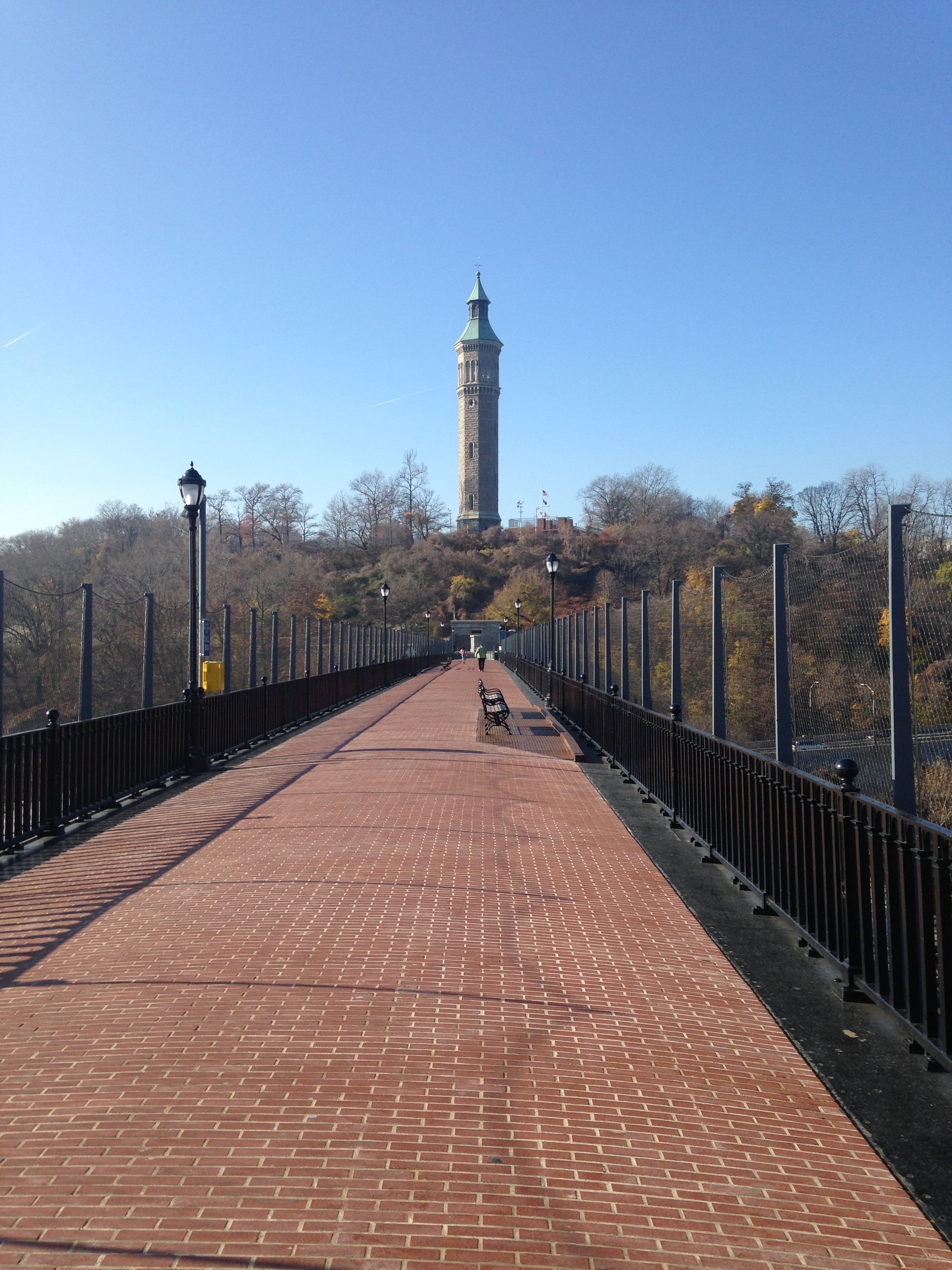 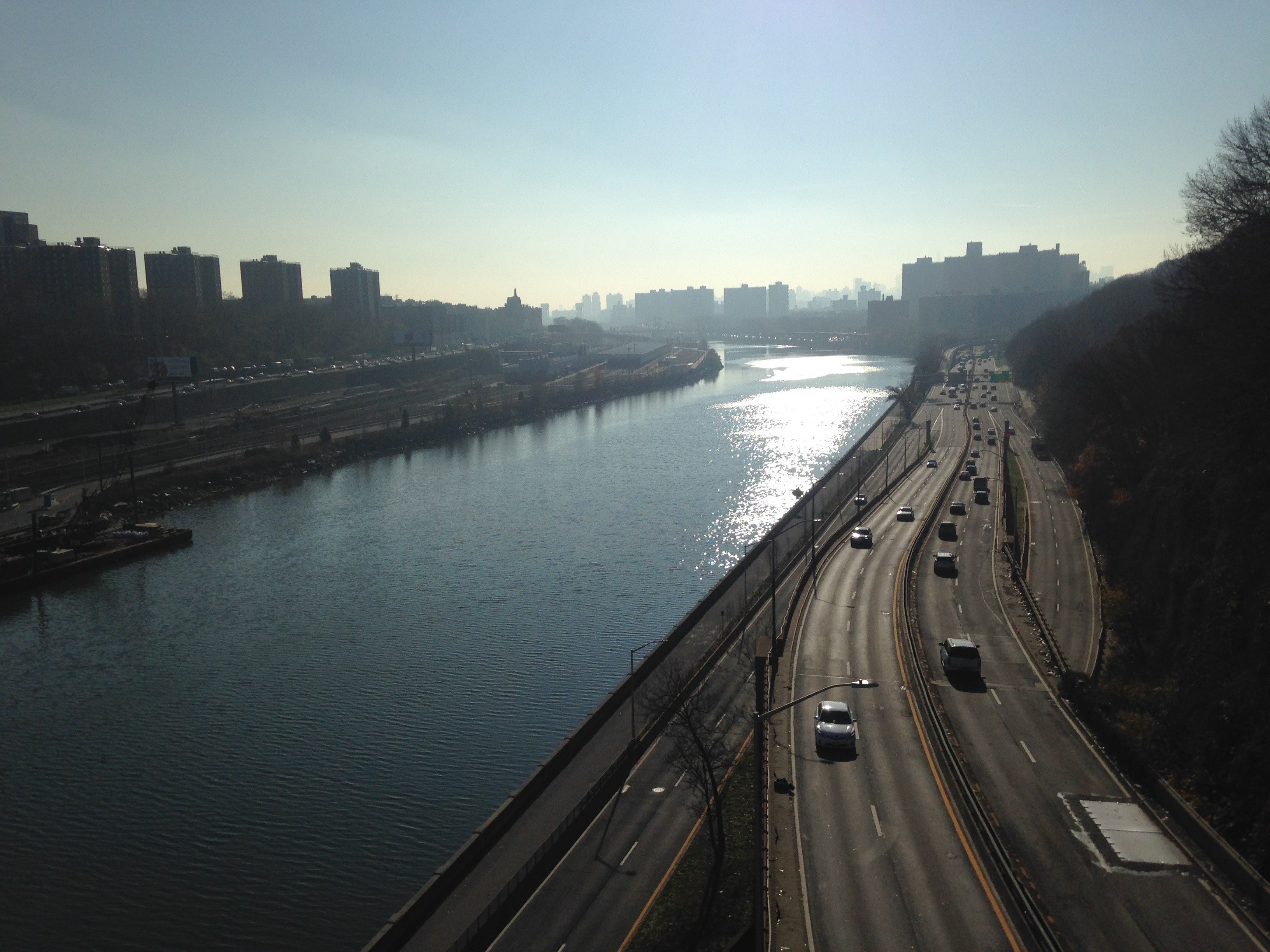 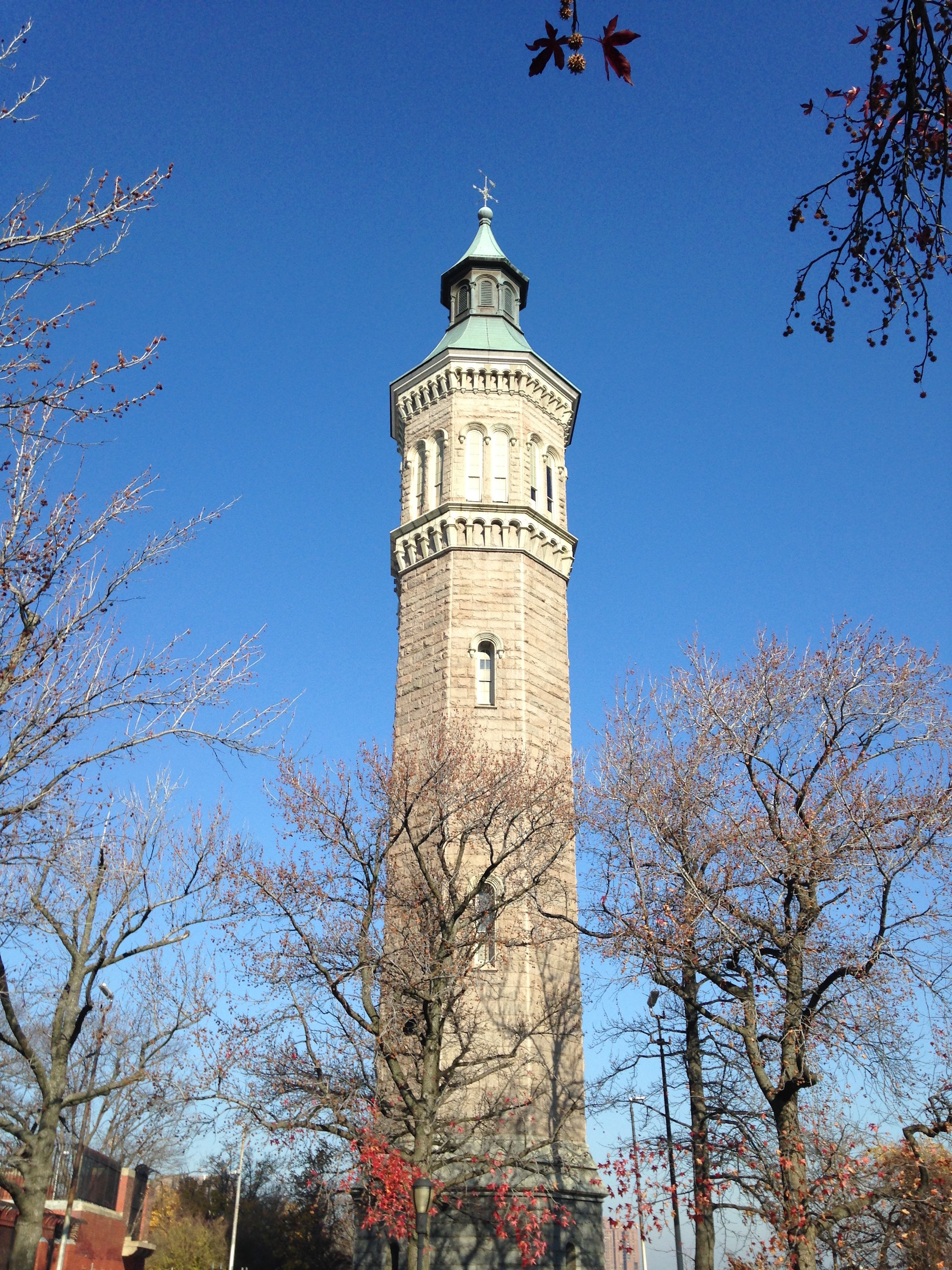 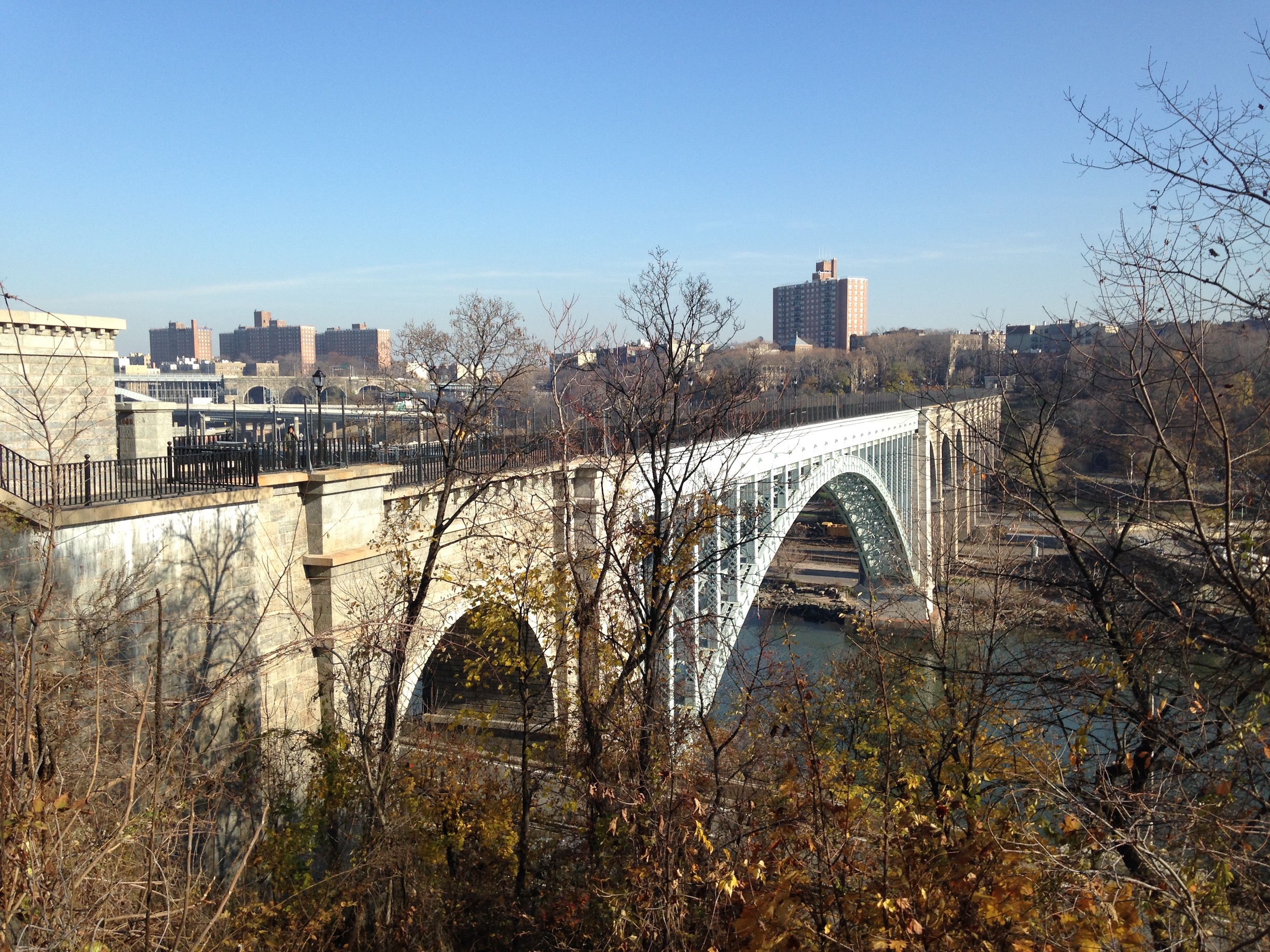 A couple questions:
– In early drawings it’s a classical-style aqueduct, but at some point that metal central span seems to have been added. When did this happen? Why do no accounts of the bridge ever mention that?
– Who writes these posts? Is it Greg and/or Tom? Or someone else? If it’s someone else, are you angry that you never get a byline?

It happened during (or about) World War I. The War Department decided that the arched in the river were a hazard to navigation, so they were replaced.

Actually, it seems I was off by about a decade. It was 1927 or 1928 when the arches were replaced, and it was specifically the Army Corps of Engineers that ordered the arches in the water removed. See https://en.wikipedia.org/wiki/High_Bridge_(New_York_City)

Five masonry arches of the High Bridge were demolished in 1927, to be replaced by the singular steel arch, allegedly to allow safer shipping on the river. The NYC municipal Archives has an entire series of photographs showing the progress of the demolition and reconstruction by 1928. Search “Bridges,Plant, and Structures” category on the Muni Archives website to see pictures.