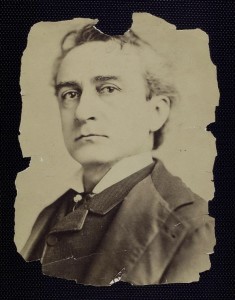 — Booth owned a theater at 6th Avenue and 23rd Street that nearly bankrupted him. However it was a favorite stage for international star Sarah Bernhardt.

— Booth came from one of America’s great acting families of the 19th century. Â Father Junius Brutus Booth (that name!) once performed at the Park Theatre on Park Row. Â Tom told a ghost story relating to the Park Theatre in this year’s ghost stories podcast. Â Meanwhile, the theater impresario who hired Junius, Stephen Price, was buried in the now-vanished graveyard of St. Mark’s-in-the-Bowery.

— Booth’s final performance (as Hamlet) was at the Brooklyn Academy of Music. Â He’s prominently featured in our podcast on the subject from June 2012. Â Here’s a picture of him in his signature role as Hamlet.

— You can find statues of Edwin Booth in various places in New York. Â Of course, he stands in Gramercy Park, near the location of his famousÂ Players Club. Â But you can also find his bust up in the Bronx, in the Hall of Fame of Great Americans.Â

— Booth was a good friend of another icon who later made New York his home — Mark Twain. Â In fact, Twain often stayed at Booth’s Players Club, smoking cigars and playing pool. Â Booth comes up in my podcast on Mark Twain’s New York.