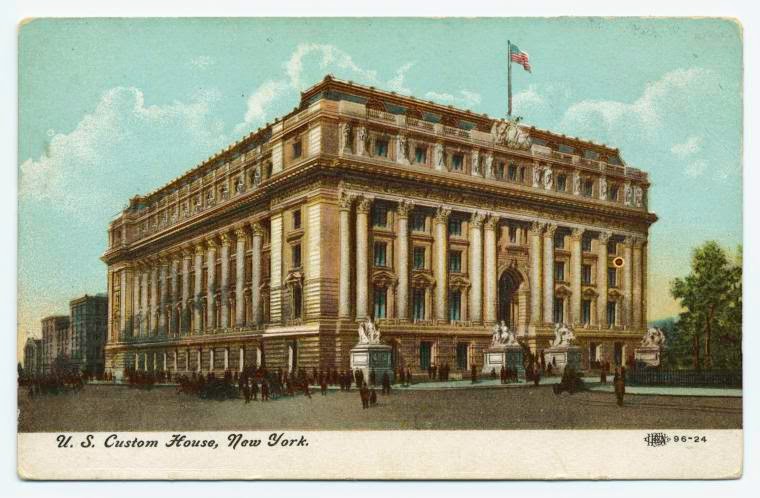 An old postcard of Cass Gilbert’s U.S. Custom House, one of the highlights of this year’s Open House New York.

You have no excuse now. Â This weekend is theÂ 12th Annual Open House New York, the city’s annual celebration of history, architecture and design. Â Hundreds of places throughout the five boroughs will throw open their doors to visitors. So that weird old church you’ve always wanted to visit? It’s probably open. Â Ever wanted to explore a neighborhood you’ve never been to but needed a reason to go? Â This is your reason.

Some places featured this weekend did require reservations, most of which have been taken. Â (But not all. check the Open House website to be sure.) Â But a large number of locations have free admissions — museums, historical houses, unusual residences and so many more.

Here are a few recommendations of places to visit this weekend that are completely free to visit. Â You can find the full list here. Â I’ll be around running around to several Open House sites for most of the weekend so follow along with me on Twitter (@boweryboys) or on Instagram (boweryboysnyc).

In additional, I’m also providing a little ‘suggested listening’, prior Bowery Boys podcasts which relate directly or indirectly to the Open House New York sites in question. Â You can download them via iTunes or at the links provided below. 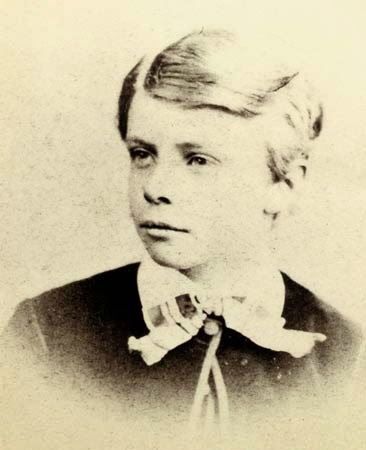 28 E. 20th Street, Manhattan
Muster up some of that enthusiasm that welled within you during the Ken Burns’ documentary The Roosevelts a few weeks agoÂ and head over to the Flatiron District to visit the beautiful home that gave us Teddy himself. Â There are park rangers and docents scattered throughout the house to spill the home’s fascinating history. Spend the afternoon imagining this sickly kid pictured at right running through these halls. (Meanwhile, if you got reserved tickets to tour the other Roosevelt house, congratulations!)
WHEN: Saturday, October 11: 9:00 am – 5:00 pm
IN THE AREA: Head on over to the Grand Lodge of Masons afterwards on 23rd Street for a truly memorable tour of the ornate ritual rooms.
SUGGESTED LISTENING: Theodore’s home is located right off of Â the Gilded Age shopping district Ladies Mile. Wander around and listen to the history of this area. Â If you do go to the Grand Lodge, please check outÂ our podcast on Cleopatra’s NeedleÂ which reveals one particular secret of this unusual building.

Central Synagogue
652 Lexington Avenue at 55th Street, Manhattan
Most people think St. Patrick’s Cathedral when they think midtown and religion, but Central Synagogue is actually older, opening in 1872. Â What’s especially unusual about this building is its Moorish Spanish design which reverberates brightly throughout the buildings (newly renovated in 2001).
WHEN: Sunday, October 12: 11:00 am – 1:00 pm
IN THE AREA: Â If you’re one of those holding tickets to the Fifth Avenue Presbyterian Church clock tower, then these two sites perfect complement each other. Â If not, head on down to 44th Street and stroll around the opulent Beaux-ArtsÂ General Society of Mechanics and Tradesmen.
SUGGESTED LISTENING: Our latest podcast on Gramercy Park also gives the origin story of the street that the synagogue sits on — Lexington Avenue. [Download here] 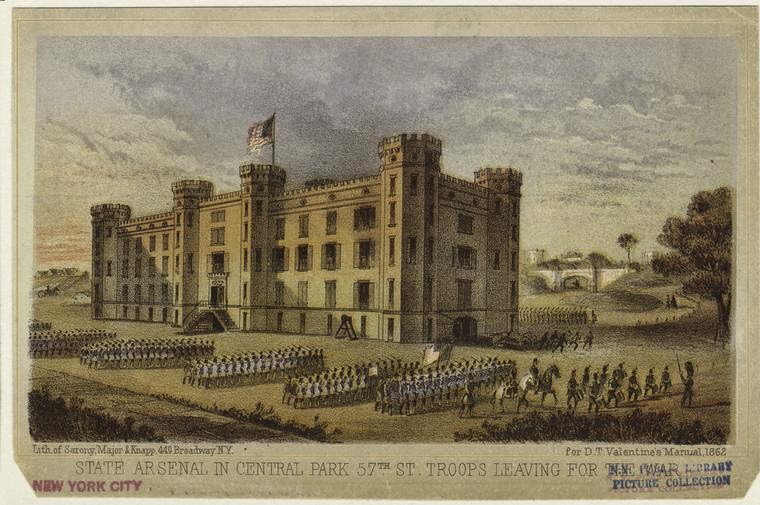 An image of the Arsenal from 1862. “Troops Leaving For the War” (NYPL)

The Central Park ArsenalÂ
830 Fifth Avenue, Central Park, Manhattan
This former armory building — once a prototype natural history museum — predates the park itself and currently houses the New York Parks Department. Â There’s roof access too so you can impress your friends with unique pictures of the park around you.
WHEN: Sunday, October 12: 10:00 am – 4:00 pm
IN THE AREA: Â You’re just a block away from Temple Emanu-El which is providing tours all day. Â Among the more recent reasons to soak in this Jazz Age-era beauty: the memorial service for Joan Rivers was held here last month.
SUGGESTED LISTENING: Our two part series on the history of Central Park.Â  {You can find special illustrated’ versions of episodes #54 and #55 at iTunes or at these links.)

Alexander Hamilton U.S. Custom House
1 Bowling Green, Manhattan (pictured at top)
This former custom house, named for my favorite person ever, is always a delight to visit as it houses the National Museum of the American Indian. Tours throughout the day will give you some insight into the extraordinary — and sometimesÂ wacky— touches conceived by architect Cass Gilbert.
WHEN: Saturday, October 11 — 10am – 4pm; Sunday, October 12 — 1pm – 5pm
IN THE AREA: Â You can spend your entire day in downtown Manhattan! Â Follow up with a visit to important places to American history –Â Federal Hall National MemorialÂ and theÂ African Burial Ground National MonumentÂ (open Saturday only).
SUGGESTED LISTENING: Â Why not try our history of Gilbert’s more famous structure — the Woolworth Building? [Download here]

Fort Tryon Cottage & Heather Garden
Fort Tryon Park, Manhattan
You’ve probably been to the Cloisters Museum but walked by this odd little house without ever knowing its secrets. Â This fairy-tale cottage from 1905 predates both the park and the museum, and all-day tours will provide you with more interesting details of the grounds’ peculiar history.
WHEN: Saturday, October 11 — 11am – 4pm; Sunday, October 12 — 11am – 4pm
IN THE AREA: Â I highly recommend you follow up the cottage with a sally around the Morris-Jumel Mansion, followed up with a visit to Highbridge Park and Recreation Center.
SUGGESTED LISTENING: A history of the Cloisters Museum and Fort Tryon Park. [Download here] 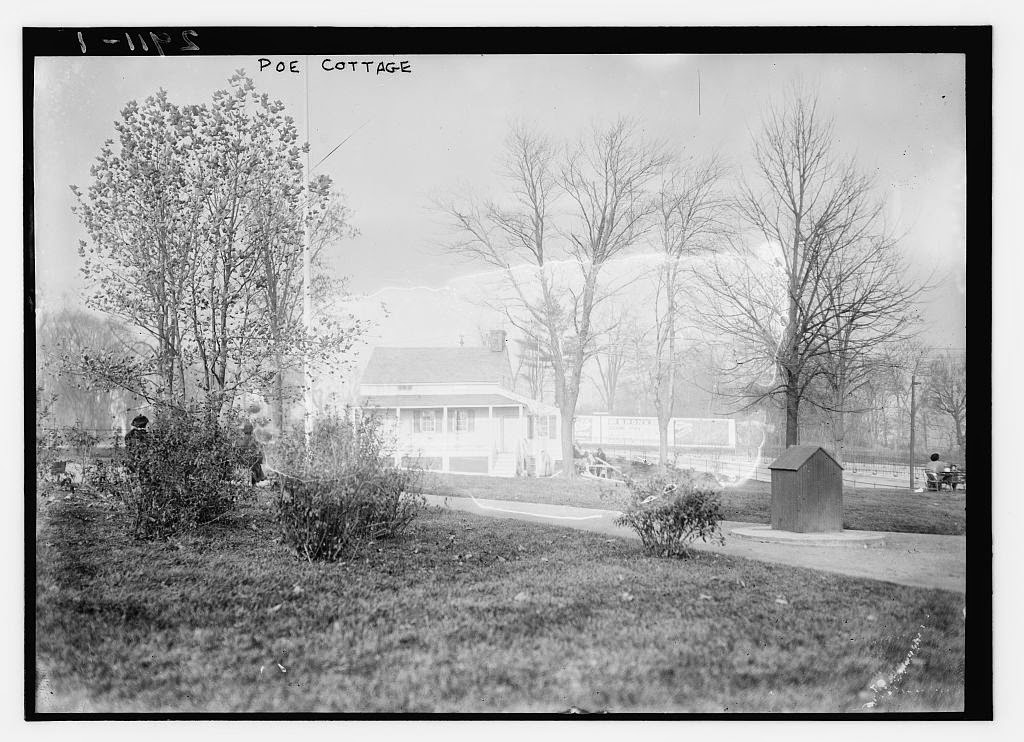 Edgar Allan Poe HouseÂ and Poe Park Visitors Center
2640 Grand Concourse, The Bronx
Is there anything more perfectly October to do than taking a free tour of Edgar Allan Poe’s former home near Fordham University? Just put on a nice sweater, get a big ole pumpkin spice coffee and head over to hear the curious story of this house. Â And stop by the fairly new visitor’s center for further information about the writer.
WHEN: Saturday, October 11 — 10am – 5pm; Sunday, October 12 — 10am – 5pm
IN THE AREA: Â You’re just a short subway right north to a perfect companion tour — the Museum of Bronx History at the Valentine-Varian House, a rustic stone mansion that’s dates from before the Revolutionary War.
SUGGESTED LISTENING: Poe, as sleuth-journalist, makes an appearance in the spooky mystery show Who Killed Mary Rogers? [Download here]

TheÂ Great HallÂ of the New York Hall of Science
Flushing Meadows-Corona Park, Queens
You many not be as familiar with this particular relic of the World’s Fair of 1964 as you are with those of the New York State Pavilion, but this curious building — Â “with no corners or straight segments” — was designed by Wallace Harrison, the favorite architect of the Rockefellers. Â Grab a sneak peak of the new renovations before it officially opens later this month.
WHEN: Saturday, October 11 — 10 am-2pm; Sunday, October 12 — 10am-2pm
IN THE AREA: A short subway right east will get you to a couple interesting places, open both days, including the Kingsland Homestead (built in the late 18th century) and Voelker Orth Museum, Bird Sanctuary and Victorian Garden, perhaps the quaintest place along the entire Eastern seaboard.
SUGGESTED LISTENING: A history of the World’s Fair 1964-65. [Download here] 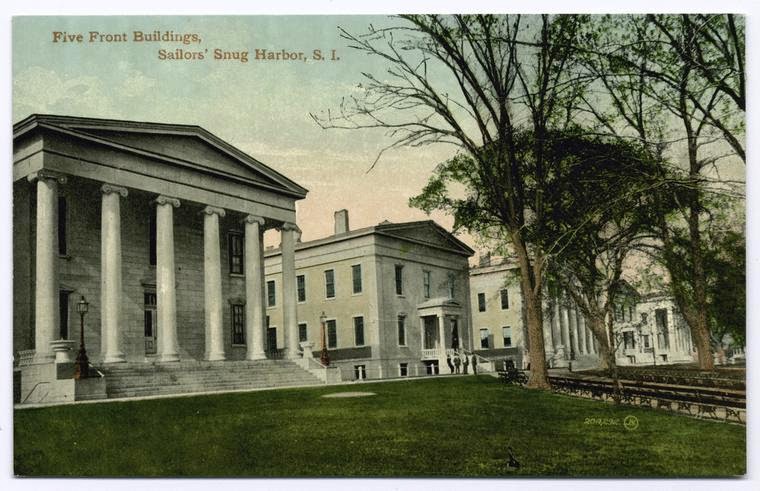 Sailors Snug Harbor
1000 Richmond Terrace, Staten Island
Here’s the thing — there are many of you reading this who have never been to Sailors Snug Harbor. Â So rearrange your plans this weekend and make this the weekend you visit one of New York City’s truly spectacular places. Â This 1830s collection of Federalist architecture and surrounding campus will allow you to feel like a time traveler. Â [Read more about it here.]
WHEN: Saturday, Oct 11 — 10am-5pm; Oct. 12 — 10 am-5pm
IN THE AREA: A short bus ride or bike ride will get you to two of my favorite places in the borough — The Alice Austen House andÂ Fort Wadsworth / Battery WeedÂ (open Saturday only).
SUGGESTED LISTENING: A brief history of Staten Island. [Download here]

St. Ann and Holy Trinity Church
157 Montague Street, Brooklyn Heights
This austere structure is one of the most impressive churches in a neighborhood filled with 19th century churches, with breathtaking stained-glass windows and shadowy nooks and crannies. During the 1980s and 90s, the church hosted music and theatrical performance; St. Ann’s Warehouse spun off from its corridors. Â If you’re a music fan, this is a must stop — Jeff Buckley made his unofficial music debut here during a tribute concert to his father Tim Buckley.
WHEN: Saturday, October 11 — Noon-4pm; Sunday, October 12 — 1pm-5pm
IN THE AREA: Â On Saturday head over to the Brooklyn Academy of Music for a free tour (10am-1pm). then over to the Brooklyn Navy Yard Center to wander through their great new museum space (open both days).
SUGGESTED LISTENING: A Brooklyn Heights show will be coming soon, but until then, why not get into the spirit of the season and listen to last year’s ghost stories podcast — Ghost Stories of Old New York — featuring a frightful tale of ghosts in nearby Cobble Hill. [Download here] 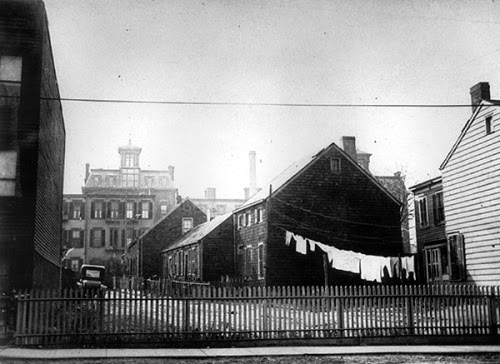 The buildings of Weeksville, 19th century.

1 reply on “Open House New York: From Teddy’s home to a secret cottage Ten FREE historical spaces to visit in all five boroughs”

Your publish blog is full of information and beneficial for the readers. You have mentioned there different places but I just visited the St. Ann and Holy Trinity Church before going with the east coast tour packages. It is one of the ancient churches and famous among tourists as a sacred place. Now I am going to The Great Hall of the New York Hall of Science in the next month.